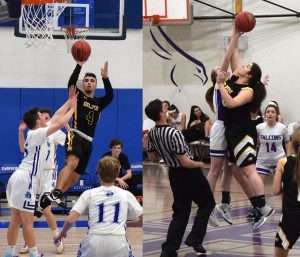 The Eagles boy and girls’ varsity teams played an away game last Tuesday, January the 14th in Lyons, Colorado vs the Lyons Lions. The game marked the 2nd League game the Eagles have played this season.

The 2nd quarter scoring began with a Lion 1-point free throw after the Eagles fouled a Lion shooter putting the Lions within 1 point of the Eagles at 10-9. Trey Lindberg (24) countered with a 3-point field goal followed by a Boulter (25) 3-pointer increasing the Eagles lead to 8 points on a score of 19-11. The Lions chalked up 4 points in successive free throws resulting from an Eagles technical foul. King (4) added 2 more points in free throws subsequent to a Lion’s shooting foul. The quarter ended with a Lion’s free throw and a 2-point field goal ending the half at Eagles 21 to the Lions 18.

The Lady Eagles opened quarter 1 with an immediate 2-point field goal by Jessica Wilhelm (30) which she followed up shortly with a 1-point free throw. The Lions responded with a free throw for 1 point and two field goals for a total of 5 to the Eagles 3. The Eagles held the Lions scoreless for the rest of the quarter while adding 6 points to their own score with 2 2-point field goals by Wilhelm (30) and one field goal from Skyley Ramsey (12). The period ended with the Eagles 9 to the Lions 5.

Second quarter scoring began with an Eagle 3-pointer by Abigail Smith (1) and a free throw by Samantha Smith (2). The Lions countered with their own 3-point field goal. Smith (2) was fouled while shooting and subsequently completed 2 free throws making the score 15-8 Eagles. In the next 3 minutes the Lions sunk 2 2-point field goals to the Eagles 1 point from a Wilhelm (30) free throw. With approximately 30 seconds left on the time clock, Skyley Ramsey (12) closed out the scoring for the quarter with a 2-point field goal producing a score of 18-12 Eagles.

Scoring was scant in the 3rd period with only 3 points scored by each team. The Lions scored first with a free throw. The Eagle’s Camryn Ganz (22) responded with a 2-point field goal that was followed by a Lion’s 2-point field goal. Ramsey (12) bagged the final point in the quarter with a free throw making the score of 21-15 in favor of the Eagles.

The Eagles ruled the 4th quarter beginning with an Alicia Johnson (20) field goal for 2 points. The Lions scored 4 points with 2 field goals that were followed by an Eagles free throw and a 2-point field goal by Ganz (22) along with 2 free throws by Ramsey (12) increasing the Eagles lead to 28-19. The Lions final points in the game were obtained via 2 free throws with 3:29 left on the game clock. During the final minute-and-a-half of the period the Eagle’s secured 5 free throws, 2 by Ramsey (12), 2 by Ganz (22) and another 1 by Smith (2). The final score was Eagles 33 to the Lyons 21.

On Friday, January the 17th the Eagles varsity teams played another away game against the Front Range Christian Falcons. This was the 3rd League competition for the Eagles in the current season’s play.

The Eagles boys’ varsity led the Falcons through the first 3 quarters of the game. Despite losing three starters to fouls in the final quarter, the team mounted a gallant effort but was destined to lose by only 2 points.

The final quarter was primarily a defensive game with the only score being a 2-point field goal scored by the Eagles Skyley Ramsey (12). Although the scoring was sparse each team had at least 4 free throw opportunities none of which were successful. The game ended with a decisive Eagles win on a score of 29-14.

The Eagles game against Flatirons Christian was played on the Eagle’s home court on Saturday, January the 18th. This was the Eagle’s 7th non-league game for the season.

While the 4th quarter saw the Bisons score 10 points with 3 2-point field goals and 4 free throws the Eagles scored only 6 points with 1 2-point field goal, 1 3-pointer and 1 free throw. The game ended with a score of Eagles 41 to the Bisons 54. Point leaders for the Eagles were Nolan Lindberg (24) with 14 points followed by Stephen King (24) with 12 points. Boulter (25) and Lindberg (24) each made 7 rebounds.

The 3rd quarter saw the Lady Eagles battle their way to a 4-point lead. The Bisons counted 4 field goals for 8 points during the quarter while the Eagles presented 12 points by way of 6 field goals. The 3rd period ended with the Eagles leading by 4 points with the score at 44-40.

During the 4th quarter the Eagles were limited to only 2 points by the Bison defense while the Bisons were able to establish 14 points with 5 2-point field goals and 4 free throws. With less than 3 minutes left in the game the Eagles put on a full court press but were unable to acquire the desired turnovers and instead committed 4 offensive fouls that increased the Bisons lead by 3 free throw points. The final game score was 46 to 54 in favor of the Bisons.

END_OF_DOCUMENT_TOKEN_TO_BE_REPLACED

Benefitting the county, schools, and much more By Don Ireland   This year marks the 30th anniversary of casinos opening in the former little mining towns of Black Hawk, Central City and Cripple Creek, Colorado. In those early years, smoking was allowed inside ... END_OF_DOCUMENT_TOKEN_TO_BE_REPLACED

Benefitting the county, schools, and much more By Don Ireland   This year marks the 30th anniversary of casinos opening in the former little mining towns of Black Hawk, Central City and Cripple Creek, Colorado. In those early years, smoking was allowed inside ... END_OF_DOCUMENT_TOKEN_TO_BE_REPLACED