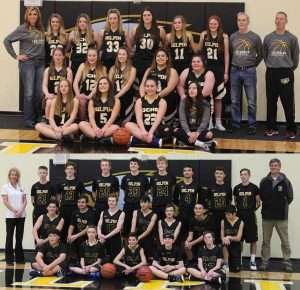 The Gilpin County girls’ basketball team was selected as the surprise “Girls’ Team of the Year” by the Mile High 2A All-District coaches. The Lady Eagles ended their season with a respectable 14 wins to 9 losses overall, and 8 wins and 4 losses in League play. Freshmen Camryn Ganz (22) and Skyley Ramsey (12) along with senior Jessica Wilhelm (30) were selected to the All-District Girls Team. Freshman Abigail Smith (1) and seniors Alicia Johnson (20) and Sarah Trujillo (5) each received All-District honorable mentions.

The Gilpin Eagles boys’ team had a statistically disappointing season with 4 wins to 16 losses overall and 2-10 in League play. The team lost key starter Nolan Lindberg (24) to an ankle injury for a substantial part of the League season. However, on the upside, many of the team’s losses were decided by only a few points and could have gone either way. The boys’ varsity juniors Blake Boulter (25) and Stephen King (4) were voted to the Mile High 2A All-District Boys’ Team, while both junior Nolan Lindberg and freshman Trey Lindberg received honorable mentions.

Both the girl’s and the boy’s teams are looking forward to the next basketball season. Although the girl’s team is losing a number of seniors, they have a strong upcoming group of young players that bode well for future seasons. On the other hand, the boys’ team is not losing any players this year due to graduation. With experienced juniors and a talented array of younger players coming up, next season looks promising. Congratulations to the selected Gilpin All-District players and honorable mentions.

END_OF_DOCUMENT_TOKEN_TO_BE_REPLACED

Where the dead get to tell their story By Jaclyn Schrock On Saturday, August 21, the Gilpin Historical Society held their annual Cemetery Crawl. Tickets allowed the shuttle of hundreds of guests from the Teller House parking lot to the Cemetery. Depending on v... END_OF_DOCUMENT_TOKEN_TO_BE_REPLACED

Benefitting the county, schools, and much more By Don Ireland   This year marks the 30th anniversary of casinos opening in the former little mining towns of Black Hawk, Central City and Cripple Creek, Colorado. In those early years, smoking was allowed inside ... END_OF_DOCUMENT_TOKEN_TO_BE_REPLACED