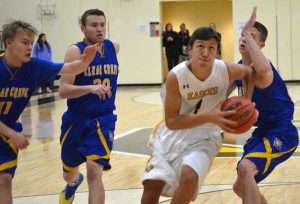 Basketball season is now under way, and Gilpin High School Eagles boys’ and girls’ teams are struggling to get air under their wings. Varsity and junior varsity teams were all defeated in home non-conference match-ups with the Clear Creek Golddiggers (Evergreen) on Saturday, December 10.

The closest and most exciting game of the day was the high-energy battle between the girls’ JV teams, which ended 39-37 in favor of the Golddiggers. Fans were on their feet screaming during the last quarter as the teams were tied and competing for the win. In the final 12 seconds, Clear Creek scored for the victory.

Varsity girls took a 41-19 loss, bringing their early season record to 1-2. They did get off to a good start in a home game on December 3, with a 33-22 win over the North Park Wildcats of Walden. They met the West Grand Mustangs at Kremmling on December 8 and were handed a 43-13 loss by a very tough team. The Mustangs already have a 5-0 record.

The boys’ varsity was defeated by Clear Creek 76-57. The Eagles have yet to score a victory out of three games this season. They gave North Park a good fight on December 3, but had to accept a narrow 55-52 loss. The West Grand Mustangs defeated the Eagles 47-30 on December 8; the Mustangs boys’ team boasts a 3-1 record.

The teams will meet Rocky Mountain Lutheran at home on Thursday, December 15, beginning at 4:30 and Lake County away on Saturday, December 17.

The Eagles last met the Golddiggers in January, defeating their rivals 63-44. Now it was the Golddiggers’ turn to win. Gilpin looked promising in the first quarter, scoring first and leading for most of the period except for a couple of brief ties. The first quarter ended at 16-15 Eagles.

Gilpin sputtered during the second quarter as Clear Creek pressed harder and began to widen the gap significantly. Players were not holding back, and the game got a little unruly as Gilpin’s Will Lorenz crashed into the scorekeepers’ table. Personal fouls brought members of both teams to the free throw line repeatedly. The score was 38-24 at the half.

The Eagles worked to stage a comeback in the third period, but continued to lose points to the Golddiggers as they fouled Clear Creek’s Noah Siarra and Lucas Gerding, who both made good on most of their free throws. The fourth quarter continued in the same vein until the final buzzer.

Senior Matthew Immordino topped the Eagles with 28 points, and senior Braedyn Perez chipped in 10, including the team’s only 3-pointer. Siarra of Clear Creek garnered 40 points, and their team grabbed seven 3-point field goals.

The Eagles scored on 14 free throws, compared with 21 for the Golddiggers.

Gilpin had 20 turnovers to Clear Creek’s 12, which made a big difference in the outcome.

The Eagles had five impressive blocks, including 2 by Peterson and 1 each by Immordino, Eryk Lorenz, and Austin Boulter. Gilpin also had 6 deflections.

The Lady Eagles hoped to redeem themselves after last year’s resounding 58-22 loss to the Golddiggers, but it was not to be. Clear Creek got off to a fast start, leading 9-2 at the end of the first quarter. The gap widened to 22-11 at the half, despite the scoring efforts of freshman Jessica Wilhelm, senior Annabel Diekman, junior Cicely Lepro, and senior Keely Schmidt. Clear Creek had a couple of good steals in the third quarter, bringing the score to 37-15. Lepro answered early in the final period with Gilpin’s only 3-pointer, giving the Lady Eagles 18 points. They were only able to swish in 1 more point in that quarter, as Schmidt popped in a free throw, and the score ended at 41-19 for the Golddiggers.

Wilhelm was the leading scorer for Gilpin with 7 points; Clear Creek’s Grace Werlin was their champion with 15, including 6 free throws.

Wilhelm also led the Lady Eagles in rebounds with 7, including 2 offensive and 5 defensive; Schmidt contributed 5 defensive and senior Berkley Davis helped with 4. Gilpin had a total of 27 rebounds, compared with Clear Creek’s 40. Once again, Werlin topped her team.

Gilpin came in with 7 assists. They had 3 steals by junior Aspen Nadeau, senior Annabel Diekman, and Schmidt, to Clear Creek’s 14.

Once again, turnovers won the day for the Golddiggers, as they had only 7 and the Eagles gave up 20.

Wilhelm had 3 blocks for the Lady Eagles; the Golddiggers came up with 11. The Gilpin girls had 5 deflections, while their opponents had 10.