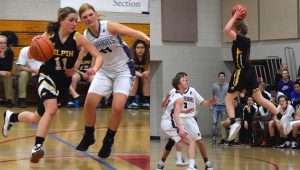 Last Tuesday evening, January the 21st the Gilpin County High School Eagles boy and girl’s varsities played the Longmont Christian Warriors in an away game held in Longmont, Colorado. The boys came into the week with a League record of 0-3 while the girls came with a record of 2 wins and 1 loss.

The Eagles boys’ varsity battled staying within 3 points in the first half of the game against the Longmont Christian Warriors.  Despite losing 2 key starters in the 3rd quarter the team fought in the final quarter to hold the Warriors to 7 points, their lowest scoring period of the game.

In the 1st quarter the Warriors held the Eagles to only 5 points all added by Nolan Lindberg (24) with a 2-point field goal and 3 free throws. The Warriors, on the other hand, chalked up 17 points during the quarter leaving the Eagles with a 12-point deficit on a score of 5-17.

The game became more arduous for the Eagles in the 3rd quarter after they lost 2 key players. Lindberg (24) contributed 5 points with 2-point and 3-point field goals before being forced out of the game with an ankle injury. King (4) added 2 points with a field goal before fouling out of the game. Boulter added the remaining 4 points with 2 field goals giving the Eagles 11 points for the quarter. The Warriors recorded 17 points in the quarter finishing the period with a score of Eagles 37 to the Warriors 64.

The Warriors took advantage of the Eagles loss of key players during the 4th quarter holding the Eagles to 1 3-point field goal by Boulter (25) and enhancing their own score by 18 points. The game ended on a score of Eagles 40 to the Warriors 82.

The Eagles scored only 4 points in the 3rd quarter with contributions by Ganz (22) with a field goal and a free throw and by Alicia Johnson (30). In contrast, the Warriors completed 5 2-point field goals, 2 3-pointers and a free throw totaling 17 points for the period. The quarter ended at 19-35 Warriors.

In the 4th quarter the Eagles were, again, held to only 2 points contributed by 1 free throw each from Wilhelm (30) and Nicole Adams (33). The Eagles in turn held the Warriors to 7 points, their lowest scoring quarter with 2 2-point field goals and 1 3-pointer. The game concluded with the Eagles 21 to the Warriors 42.

The Eagles boy and girl’s varsities played an away game on the Union Colony Preparatory School’s home court in Greeley, Colorado on Friday evening, January 24th. After the Gilpin boys and girls both endured losses earlier in the week they came into the Union Colony game with league records of boys 0-4 and the girls 2-2.

The Gilpin boys went into the Union Colony game without Nolan Lindberg (24) a key starter on the team who was out with an ankle injury sustained in the previous game with Longmont Christian. To add insult to injury another key player, Stephen King (4), was benched midway through the 2nd quarter with 4 fouls as a precaution against losing him too early in the game.

In the 2nd quarter the Timberwolves continued their scoring streak adding 19 points to their tally. Not until late in the quarter did the Eagles score with 2 free throws, one each by Boulter (25) and Jimmy Immordino (13). King (4) was benched midway through the period with 4 fouls putting him in danger of fouling out before the 2nd half.

Thru the 2nd half of the game the Timberwolves enhanced their score by 35 points mostly via 2 and 3-point field goals with only 1 point coming with free throws. The Eagles furthered their score by 14 points from Boulter (25) with 2 2-point field goals, from King (4) with 1 2-point field goal, from Alex Rodriguez-Jimenez (5) with a 3-point field goal and a 2-point field goal, and from Trey Lindberg (3) with 3 free throws. King (4) re-entered the game at the beginning of the 3rd quarter, then with about 1 minute left in the 3rd quarter he finally fouled out leaving only 3 of the Eagle’s regular starting lineup on the court. With about 2 minutes left in the game another starter Jimmy Immordino (13) fouled out leaving only 2 of the teams 5 starters to finish the game alongside the team’s less experienced players. The game ended with a score of Eagles 21 to the Timberwolves 69.

Scoring picked up in the 4th quarter with the Timberwolves scoring 9 points on 2 2-point field goals and 5 points from free throws. The Eagles enhanced their score by 11 points with scoring spread out between Ramsey (12) with 4 free throws, 1 free throw by Warren (11), and 1 2-point field goal each by Wilhelm (30), Johnson (20) and Ganz (22). The game ended with an Eagles 33-27 victory over the Timberwolves.

END_OF_DOCUMENT_TOKEN_TO_BE_REPLACED

Where the dead get to tell their story By Jaclyn Schrock On Saturday, August 21, the Gilpin Historical Society held their annual Cemetery Crawl. Tickets allowed the shuttle of hundreds of guests from the Teller House parking lot to the Cemetery. Depending on v... END_OF_DOCUMENT_TOKEN_TO_BE_REPLACED