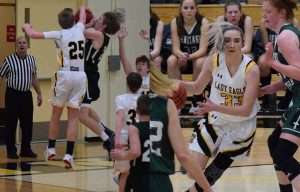 Versus Highland Huskies and Heritage Christian

Highland’s boys’ varsity came into the game ranked 2 in the League and with stats narrowly akin to the #1 ranked Denver Christian. The Eagles were still without key starter Nolan Lindberg who has been inactive with an injured ankle.

Trey Lindberg (3) and Stephen King (4) scored 4 points in the 4th quarter with one 2-point field goal each. The Huskies scored 8 points in the period with a mix of 2-pointers and free throws. The final tally displayed Eagles 32 to the Huskies 96.

Lady Eagles soar to victory over the Highland Huskies

The Huskies opened the scoring with 3 points via a field goal and a free throw. The Eagles responded by preventing the Huskies from scoring any further points during the 1st quarter and placing 11 points of their own on the board. Eagles’ contributors were Samantha Smith (2) with a 3-point field goal, Camryn Ganz (22) with a 3-pointer and a free throw and Jessica Wilhelm (30) with 2 2-point field goals. The quarter ended with a score of 11-3 Eagles.

In the 2nd quarter the Eagles held the Huskies to only 2 free throws for the period. Ganz and Wilhelm each completed a 2-point field goal and Skyley Ramsey (12) sunk 2 free throws adding 6 more points to the Eagles count. Half time ended with the Eagles up by 12 points at 17-5.

The Gilpin County varsity boy and girls’ basketball teams both lost in conference games played against Heritage Christian of Fort Collins, CO on Saturday, February 8th. The games were played in the evening on Gilpin’s home court.

The 2nd and 3rd quarters went poorly for Gilpin. In the 2nd quarter Gilpin scored 9 points to Heritage’s 29. Gilpin’s points came from King (4) with 3 2-point field goals and a free throw and by Boulter (25) with a 2-point field goal ending the quarter with a score of 26-49 Heritage.

Heritage scored 15 points in the 3rd quarter while Gilpin added only 5 points. The points for Gilpin came from Boulter (25) with a 3-point field goal and King (4) with a 2 pointer. The quarter concluded with Heritage leading on a score of 31-64.

Gilpin actually outscored Heritage by 7 points in the 4th quarter, but it was insufficient to make up Gilpin’s 33-point deficit coming into the period. During the final quarter Heritage scored 17 points. Gilpin’s 4th quarter tally was boosted by Boulter (25) with 4 2-point field goals, 1 3-pointer and a free throw; King (4) with 2 3-pointers and a free throw and Lindberg (3) with single 3-point and 2-point field goals. The game concluded with Gilpin declaring 55 points to Heritage’s 81.

In the 1st quarter Gilpin was able to hold Heritage to 7 points, however, Gilpin scored only 4 points. Gilpin’s Nicole Adams (33) and Camryn Ganz (22) completed 1 2-point field goal each ending the quarter at 4-7 in favor of Heritage Christian.

Gilpin chalked up 10 points in the 2nd quarter while Heritage secured 17 points. Contributing to Gilpin’s score were Ganz (22) and Skyley Ramsey (12) each with a 2-point field goal along with Samantha Smith (2) and Sarah Trujillo (5) each of whom completed a 3-point field goal. At half time the scoreboard displayed Gilpin 14 to Heritage 24.

Gilpin’s Lady Eagles battled hard in the 3rd period to make a comeback from their half time deficit of 10 points. However, Gilpin was only able to match Heritage with each team scoring 15 points during the quarter. Gilpin’s points were produced by Jessica Wilhelm (30) with 2 2-point field goals and a 3-pointer, Ramsey (12) with a 2-point field goal, Alicia Johnson and Ganz (22) with 1 3-pointer each. The period ended with Gilpin still down by 10 points on a score of 29-39

END_OF_DOCUMENT_TOKEN_TO_BE_REPLACED

Benefitting the county, schools, and much more By Don Ireland   This year marks the 30th anniversary of casinos opening in the former little mining towns of Black Hawk, Central City and Cripple Creek, Colorado. In those early years, smoking was allowed inside ... END_OF_DOCUMENT_TOKEN_TO_BE_REPLACED