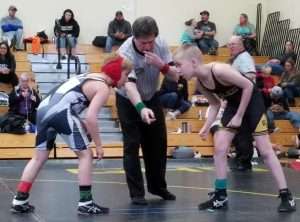 On Saturday, January 6, the Gilpin County Youth Wrestling team hosted a Metro Junior Wrestling League Tournament at the Gilpin School. The admission was only $5 for adults, and $3 for seniors and children, and was well worth the admission price for all the action that ensued.

Each club was responsible for providing table help and referees if needed.

There were wrestlers from the 4-5 year olds up to junior high age, and depending on the number of wrestlers for each weight group, they had the opportunity to wrestle from 3-5 matches each on one of the five wrestling areas in the gym.

With all the parents, families, and coaches, the gym was packed and noisy starting at 9 am. Coaches were yelling instructions to each of their wrestlers during the match, and it seemed to work somehow through all the mayhem.

There were a surprising number of girls wrestling, and they put on a good show as they were as scrappy as the boys out on the mat. They had their hair braided and in caps for the most part, and most of the kids wore protective head gear to save their ears.

The wrestlers were very passionate about their matches, and were visibly upset when losing or getting pinned, but were always very respectful and polite, shaking their opponents hand, the referee’s hand, and the opposing coach’s hand when the match was over.

Depending on the number of wrestlers in each weight class, some wrestled the same opponent multiple times.

END_OF_DOCUMENT_TOKEN_TO_BE_REPLACED

Where the dead get to tell their story By Jaclyn Schrock On Saturday, August 21, the Gilpin Historical Society held their annual Cemetery Crawl. Tickets allowed the shuttle of hundreds of guests from the Teller House parking lot to the Cemetery. Depending on v... END_OF_DOCUMENT_TOKEN_TO_BE_REPLACED

Benefitting the county, schools, and much more By Don Ireland   This year marks the 30th anniversary of casinos opening in the former little mining towns of Black Hawk, Central City and Cripple Creek, Colorado. In those early years, smoking was allowed inside ... END_OF_DOCUMENT_TOKEN_TO_BE_REPLACED