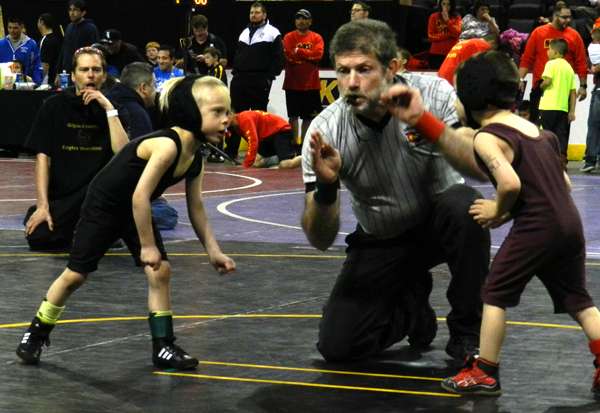 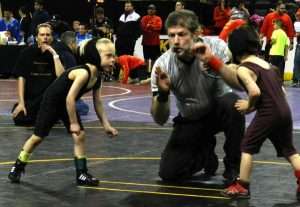 Our very own Gilpin County Youth Wrestling club ended their season as number 25 out of 106 teams statewide this past weekend at the Colorado State Youth Wrestling Tournament. Twelve wrestlers, ages four to fourteen and residents from Ward to Central City, attended the sporting event at the famous World Arena in Colorado Springs. Nine of them placed from first to sixth in the tournament inviting wrestlers from the entire state, and these local kids earned a total of ten trophies to bring back home.

Two of those ten trophies were won by the youngest and smallest member of the team at 32 pounds, league state champion Cooley Murdock, who won both first place in the novice six and under and fourth place in the experienced division. Murdock has had an amazing season and has taken home first place in 82% of his events.  Coach Pete Morgan states, “Four years old is an ideal time to begin wrestling because whether you are from 5A Pomona or Gilpin County, all four year olds start out at the same level and you grow with the competition as it expands and develops.”

Joining the tournament’s experienced division was the tallest member of the team, Mateo Maldonado, who placed fourth in the 12 and under (136 lbs.) weight class and has demonstrated a dominating force with 18 total season pins. Mom and Coach Diana Hernandez commented, “He is a monster at 136 pounds and 6 feet tall who loves to uses his leg rides to dominate his opponents.” Coach Morgan indicates that Mateo is a perfect example of how important it is to get started in wrestling at a young age. His hard work for several years and early start in competitive wrestling has helped him to have a successful season.

The majority of wrestlers in the club have competed in the novice division since they have never competed in the Metro Junior Youth Wrestling League before. They have enjoyed their first year of intense competition since the home wrestling organization, Gilpin County Youth Wrestling, was granted membership into this competitive league. Morgan describes the league as “comprised of everything from 5A schools to small communities and provides a platform for basically every state high school champion.” The Gilpin County Youth Wrestling organization got its roots seven years ago as an afterschool program that focused on introducing children to the sport of wrestling to help them learn a good work ethic and to develop character.

Coach Pete Morgan describes this first year as “exceeding our wildest expectations” which is clearly embodied by the team’s performance this last Saturday and Sunday. Third place was accomplished by Joseph Ariola (10U – 80lb), Mike Wenholz (12U – 84lbs), and William Siegrist (10U – 105lbs). Zachariah Gebhart captured fourth place (10U – 95lbs), and fifth place was secured by Kage Anthony (10U – 80lb). Roland Keller (8U – 50lbs) and Benjamin Gebhart (8U – 87lbs) finished up the trophy count by earning sixth place in their weight classes.

Attending coaches at the tournament were beaming to see their kids’ hard work represented by an amazing and fruitful first year. This event concludes the wrestling organization’s season which will begin again in October after soccer concludes. The coaches work hard to support, inspire, and help these exceptional youth train to participate in what many consider to be the most competitive wrestling league in the state.

You can’t help but notice Coach Morgan’s enthusiasm and passion about wrestling in general. He is surrounded by a team of coaches that have all brought important skills to the table to help create well-rounded support for the program and its kids. Todd Miller brings a “hard work, serious mentality and has been a driving force in everything we’ve done,” notes Morgan. He continues, “Diana Hernandez is so passionate, good with the kids, and inspirational. Her knowledge and experience has helped us tremendously. Clinton Wenholz has been absolutely instrumental for logistical support and helping us to connect the school and the county. Travis and Dana Murdock have been at tournaments to help coach and inspire in so many ways.”

Wrestling is certainly a sport that brings passionate athletes and their families together. This organization is special because it strives to allow the sport to be inclusive for any child that wishes to participate, regardless of their particular situation. The coaches and parents all worked together to helped get wrestlers to and from events. Morgan comments, “Wrestling is not exclusive and elite, as a big fish in a small pond. It’s a community coming together. The way most sports in general need to fundamentally change. We need to be inclusive, raise money for kids who can’t afford to participate, and get a ride for students whose parents must work on the weekend. We must include everyone and create a culture of kids inspiring each other. There are only small fish jumping into the greater ocean in wrestling, and they’re doing it together as a team.” 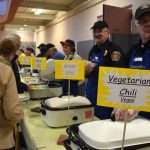