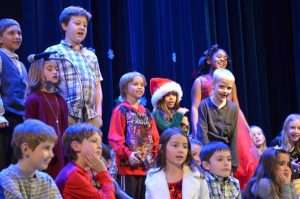 Gilpin County upper elementary and secondary classes entertained in the school auditorium and hallways with a Winter Fine Arts Festival on the evenings of December 12 and 13. The young people illustrated their tunes with artistic techniques to make a well-rounded presentation.

Music teacher Misty Ebers welcomed the audience, mentioning that teachers, students, and parents had been struggling with a lot of illness and thanking everyone for persevering. She expressed appreciation to the superintendent, teachers, and Booster Club and also showed off a school spirit scarf in the Eagles’ black and gold, complete with hand-warming pockets. The scarves were available for sale in the atrium.

Art teacher Curt Halsted gave kudos to Ebers for all her work with the children. He thanked Erin Trumble for coordinating the art display and Angela Webb and Mary Perkins of the PTA for providing ribbons for art show winners. The winning art in the 2018 PTA art show was displayed on tables in the atrium. Halsted said that the school’s website will feature a digital art show beginning in January.

Middle and high school students had the floor on Wednesday, December 12. The artists’ work included pencil ornament drawings, plein air watercolors (a French expression meaning “in the open air” — students went outside to create these landscapes), fauve art (another French term meaning “wild beasts,” referring to the intense color contrasts in the paintings), and Opera House collages (students learned the history of the Central City Opera House and used rubbing alcohol, paint splatters, and salt to create these collages).

The concert started with several band pieces. The musicians ranged from beginners to advanced pupils. They had been working on their pitch and on learning new and more difficult time signatures. The instrumentation was thinner than usual, with so many out sick. To fill out the sound, Ebers accompanied on soprano saxophone and trumpet while conducting.

Despite most of the middle school choir members being absent, the rest of the chorus went on with the show, which offered selections to please every taste. “Carol of the Angels” was based on an 18th Century French carol heralding the birth of the King of kings. “Let it Go,” from Disney’s Frozen, featured a solo by Aucklynn Sacco. “Nutcracker Jingles” was perhaps the most inventive piece, with “Jingle Bells” skillfully interwoven with excerpts from Tchaikovsky’s “Nutcracker Suite.” The lovely “Little Star” shone with “The First Noel” as a countermelody. A ukulele quartet performed on “Mele Kalikimaka,” which proclaimed Hawaii’s way of saying “Merry Christmas.” The clever “Noel” from Animaniacs was filled with alternative spellings and meanings of “Noel”: “no L,” “no well,” “no whale,” “know well,” and “oh, well” among them.

On December 13, fourth graders displayed their icy blue and white snowball paintings. Montessori fifth graders brightened the halls with their candle drawings, and the traditional fifth grade class showed off colorful lines of music showing the beat, along with prominent song lyrics like “merrily, merrily,” or “fum, fum, fum.”

“Sacrifices Made,” a tribute to military veterans, began the concert, and the third graders did a command repeat performance of last week’s “When the Holidays Come” and “If I Were a Reindeer.”

The fourth graders musically expressed their heartache in “Not Enough Snow.” It’s winter, and all the outdoor fun is not happening because there is no snow. That means no snowballs, no snowmen, no snow forts, and no sledding. (Just wait till March, Gilpin children.) “Blanco es el Invierno” was an upbeat number that counteracted the doldrums of a dry winter. “Some Things for Christmas (A Snake, Some Mice, Some Glue and a Hole Too)” got the parents chuckling (and Santa, too, no doubt!).

Montessori fourth and fifth graders performed the softly calming “Glow” and then took the audience back to Thanksgiving with “It’s not Just for Turkeys.”

The traditional fifth grade class admitted they weren’t getting “Nuttin’ for Christmas.” Mommy and Daddy get mad over little things like hiding a frog in sister’s bed, putting a tack on teacher’s chair, and filling the sugar bowl with ants. Go figure.

The whole group wound things up with the jazzy, hilarious “Bus Stop.” Student Maddox Cooles rushed out, pulling his hair, while the choir lamented, “I’m late for the bus stop!” Parents, can you relate?