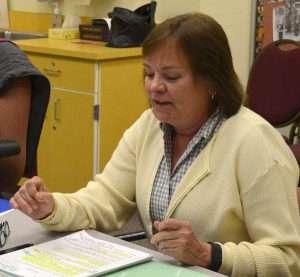 The Gilpin County Board of Education held its regular meeting on Tuesday, June 7. Members Craig Holmes, Charlotte Taylor, Kersten Armstrong, and Steve Boulter were present; Brook Ramsey was absent. Superintendent David MacKenzie and Secretary to the Board Gretchen Sechler were present.

MacKenzie noted “tons of celebrations” in May, including awards ceremonies for students’ achievements in sports and academics, graduation, elementary field day, kindergarten graduation, and more. Most of the staff is now gone for the summer.

90 percent of elementary students finished at or beyond grade level in reading and math.

Food Service Director Jane Yerkman reported on a May 2 visit from Tammie Rempe, the Director of Child Nutrition at the Colorado Board of Cooperative Educational Services (BOCES). Rempe, formerly with the Thompson School District in Loveland, observed Gilpin’s food service that day to offer suggestions.

Rempe affirmed Gilpin’s food program. “Your district has a wonderful nutrition program that offers best practices such as scratch cooking, colorful menu items, and definite pride in meal presentation,” Rempe’s report stated. She encouraged Yerkman to seek out awards for the district such as the Healthier U.S. School Challenge Award and the Healthy School Champion Award. She also recommended applying for the Fuel Up to Play 60 program, which engages students in improving a school’s health and wellness environment.

Gilpin served lunches to 232 students and 18 adults daily during the past school year, and in addition, served about 50 breakfast meals per day. With 435 students enrolled, Rempe felt there was opportunity for growth in the breakfast and lunch programs.

Yerkman’s goal was to raise the number of students eating breakfast and lunch at school. She said a total of 7,310 meals were served during the 2015-16 school year, an increase of 1,161 over 2014-15. During the past school year, 34,087 lunches were served, an increase of 3,051 over 2014-15. Ala carte revenues showed an increase of $5,948 from last year, and adult lunch revenue had increased by $3,164 from last year. Cold breakfast was offered one day a week, and hot breakfasts were offered three days each week.

11 meals were produced per hour. With the current budgeted labor hours, the food service would need to increase to 12 meals per hour to reach the national recommendation. That would be an increase of 40 meals per day to get to a “break-even” point.

Rempe suggested creating work schedules to help with advance planning. Yerkman reported that it takes eight straight hours to cut up all the fresh food, which can’t be prepared in advance. She agreed that a work schedule would be beneficial.

Rempe also shared a profit and loss template that Yerkman plans to use to develop financial goals for the next school year. Rempe expressed that Gilpin’s food costs are in line with what is being served.

To increase the number of students purchasing meals, Gilpin could add new menu items or theme menus, such as pizza, Mexican, and Asian. Yerkman felt that participation would increase if parents were aware that they could apply for meal benefits if needed, as well as marketing the food service in the hallways.

Yerkman took a survey of students in third through eleventh grade in May. Of 175 responding, 79 percent said they would buy pizza once a week. 73 percent would buy on “cheeseburger and fries” day. 60 percent would buy chicken teriyaki. 79 percent gave a negative response to fish sandwiches. 32 percent said cafeteria lines were too long; during this past year, middle/high serving was done in two lines with only one point of sale. Some elementary students needed help in getting served.

The things that increased food costs were having to use whole grain products, fresh fruit at breakfast, and hot vegetables daily. Additionally, forks and spoons cost 3 cents apiece.

Year to date, $66,000 has been transferred from the district’s general fund to the food service fund. Last year, the amount transferred was $71,000. Two years ago, the amount was $47,000. Yerkman questioned Liza Shaw of the Colorado Department of Education about the reason for the increase from $47,000 to $71,000 and was told that a number of districts had been hit hard by the state’s reclassification food service as a “special revenue fund,” figuring all depreciation in one lump sum, and changing inventory coding. Rempe had said that the Colorado BOCES budget had taken a $200,000 hit from the changes.

With more meals served and less having to be transferred, MacKenzie stated, “We’re back in the ballpark.”

Yerkman shared several thank-you notes from students. “Dear lunch ladies,” said one note. “Thank you for the frozen yogurt. You always serve good food.” Several high school students had even taken time to say “thank you for taking care of us. You don’t get appreciated enough.”

Board member Boulter asked about the low caloric counts, especially pertaining to students who attend school all day and have athletic practices right after school. His own sons are involved in the sports program and have to bring extra food to get enough to eat. “Is it possible to get a waiver?” he wanted to know.

Yerkman responded, “No. It’s the USDA guidelines. But I can sell ala carte items, after they have been served their meals and met the caloric value.”

Yerkman and her staff got recipe ideas from Platte Canyon and took a field trip last December to Golden High School and Bell Middle School in Golden. The staff at those schools gladly shared information about their distributors, and Gilpin now has a large variety of ala carte snacks, all of which meet the “smart snack” guidelines.

MacKenzie praised Yerkman and the food service staff for making the program better and more cost effective while meeting the kids’ tastes. Yerkman responded that she wanted all the students to feel welcome at the cafeteria and to feel comfortable in asking for what they wanted.

The Board approved the hire/contract for Elizabeth Hamilton, second grade teacher, effective August 8; confirmed the location for publication and posting of Board meetings; and confirmed the 2016-17 Board meeting schedule. All meetings will be held on the first and third Tuesdays of the month. The first meeting for the 2016-17 school year will be on August 16.

MacKenzie was pleased with the teachers and students, especially in the elementary school. Big contributors to their success were the purchase of aligned curriculum in English and math and the accessibility of Chromebook computers for all students.

With respect to proposed site plan improvements, MacKenzie had received survey information back for the south parking lot. The architect is to do the final design, and the school can move into the bid process and get a ballpark idea on the cost. The projected plans for the playground need to be approved by the state. The civil engineer must return to do the site survey on the north side of the football field. MacKenzie hoped that blasting at the field could be accomplished this summer and said some companies were interested in doing the job.

Omni Pro, the district’s cleaning contractors, will bring in their floor crew and do all shampooing, strip the tile, and refinish where needed. The gym floor is being worked on and should be done soon. It needs to cure for several weeks, then should be ready for the fall.

He thanked Gretchen Sechler for organizing the Volunteer Recognition program and Michelle Herrera-Welch for her assistance.

END_OF_DOCUMENT_TOKEN_TO_BE_REPLACED

Benefitting the county, schools, and much more By Don Ireland   This year marks the 30th anniversary of casinos opening in the former little mining towns of Black Hawk, Central City and Cripple Creek, Colorado. In those early years, smoking was allowed inside ... END_OF_DOCUMENT_TOKEN_TO_BE_REPLACED

Where the dead get to tell their story By Jaclyn Schrock On Saturday, August 21, the Gilpin Historical Society held their annual Cemetery Crawl. Tickets allowed the shuttle of hundreds of guests from the Teller House parking lot to the Cemetery. Depending on v... END_OF_DOCUMENT_TOKEN_TO_BE_REPLACED