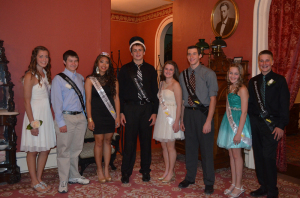 Gilpin County School celebrated its 2014 homecoming Saturday, October 18, beginning with a parade at 10 a.m. through Central City and Black Hawk. The students and the crowds of parents and well-wishers lining the streets enjoyed a warm, sunny day.

The Teller House parking lot, traditional meeting place before the parade, was a hub of activity for an hour before the event. Students, parents, and teachers worked to put together the floats and gather the homecoming royalty for their convertible rides.

The Girl Scouts came next, followed by the class floats and royalty, and local emergency responders brought up the rear.

The highlight, of course, was the creative floats put together by each class. This year’s theme was “School Spirit and Team Pride.” The freshman float bore a large stuffed eagle mascot on a nest of branches, with signs that declared “Beat Justice!” and “Don’t Mess With Our Nest!” The sophomore float had an eagle perched on a replica of the school’s rock, painted black with “2017” in yellow. The juniors had created a football game motif complete with goal posts and student Jonathan Ramsey garbed in the Eagle mascot costume. The seniors’ float “rose above” them all; the students surrounded a truly impressive giant eagle, its wings outstretched, which must have taken them hours to create.

Homecoming royalty followed the floats in convertibles. The senior king and queen were Ben Mestdagh and Alyssa Chareunsouk; the junior prince and princess were Daria Simon and Adam Holsten; the sophomore duke and duchess were Berkley Davis and Matt Immordino; and the freshman count and countess were Austin Boulter and Carly Johnson.  The parade ended at the Bullwhackers Casino parking lot.  That afternoon, the Eagles’ football team hosted Boulder’s Justice Phoenix, and were covered in glory as they triumphed 60-20. The previous Friday evening, October 17, the Lady Eagles defeated Nederland in volleyball 3-0 on Gilpin’s court. The games are detailed in another article in this issue.

The big day concluded as students rocked the night away at a “Black and White City” themed dance at the Teller House in Central City.

END_OF_DOCUMENT_TOKEN_TO_BE_REPLACED

Benefitting the county, schools, and much more By Don Ireland   This year marks the 30th anniversary of casinos opening in the former little mining towns of Black Hawk, Central City and Cripple Creek, Colorado. In those early years, smoking was allowed inside ... END_OF_DOCUMENT_TOKEN_TO_BE_REPLACED

Where the dead get to tell their story By Jaclyn Schrock On Saturday, August 21, the Gilpin Historical Society held their annual Cemetery Crawl. Tickets allowed the shuttle of hundreds of guests from the Teller House parking lot to the Cemetery. Depending on v... END_OF_DOCUMENT_TOKEN_TO_BE_REPLACED