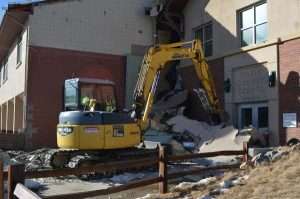 High winds that buffeted Gilpin County on Monday, January 5, blew out a wall between the old elementary wing and newer construction completed in 2000, as reported in last week’s Weekly Register-Call. The area damaged is by the administrative offices on the main floor and the art room on the bottom floor, near the school’s front entrance, and faces the elementary parking lot.

No students were present, as the staff was having an in-service day following the Christmas holiday break. No one was injured.

The wall that blew out was a wall between the old and new parts of the school and was apparently required for a fire wall. The old building’s wall still stands, and Superintendent David MacKenzie reported that the building is structurally sound.

New information since last week includes details of the wall coming down and initial plans for repairs.

MacKenzie had first noticed a noise outside of his office at about 1:30 Monday afternoon. He notified head custodian Ken Petersen, who got to the scene about ten minutes later. The two saw that the wall had started to move gradually away from the building.

“The only thing to do in the midst of all the wind and flying debris was to get out of there and have everyone stay away,” Petersen declared.

He returned at 5 a.m. the next morning and set up a perimeter around the damage to keep people away.

Other damage included a roof exhaust fan unit, which was repaired by Petersen on Tuesday, January 6. Also, an antenna dish may need to be re-aimed, and the marquee that stands at the school’s driveway entrance sustained some damage. Petersen had reinforced the marquee just a month ago and said the reinforced part held. Bleachers blew over the football field and down the hill, but are likely retrievable. Trees were blown against the bus barn.

Additionally, five people had broken car windows, including one person who lost three windows. Petersen said there was not much broken glass to clean up, because the glass had either fallen inside the cars or blew away.

“Besides, we were too busy running for cover to worry about doing clean-up,” he asserted.

There is good news, however. No internal damage was found, nor were the ground floor handicapped access doors broken. The roof is completely serviceable and intact, which Petersen said is remarkable, considering the way the wall came loose.

MacKenzie said the school is in the beginning stages of the repair process. An adjuster from the school’s insurance company came the day after the damage occurred, and a claim is in progress. No estimate is available on when repairs will take place; competitive bids will be solicited. Depending on the weather, it may take about three months for permanent repairs to be completed.

Petersen advised that a forensic engineer from Martin and Martin of Lakewood, the firm that originally designed the new building, has been contacted. The engineer is considering how the building might actually be improved through a repair. The design of the fire wall between the old and new structures appears correct and adequate, said Petersen, but added that the overall footprint may have to be modified.

“There may be new technology that could be used for the style of construction,” Petersen said. “The other side of the stair tower could be redone to match the repaired part. The engineer will assess the needs and send a proposal and a bill,” he concluded.

Gilpin County Road and Bridge employees showed up at the school on Wednesday, January 7, with a front-end loader and a dumpster to clear away the wreckage. School Resource Officer Lee Ramsey had contacted them for help, and the men volunteered their services.

END_OF_DOCUMENT_TOKEN_TO_BE_REPLACED

Benefitting the county, schools, and much more By Don Ireland   This year marks the 30th anniversary of casinos opening in the former little mining towns of Black Hawk, Central City and Cripple Creek, Colorado. In those early years, smoking was allowed inside ... END_OF_DOCUMENT_TOKEN_TO_BE_REPLACED

Where the dead get to tell their story By Jaclyn Schrock On Saturday, August 21, the Gilpin Historical Society held their annual Cemetery Crawl. Tickets allowed the shuttle of hundreds of guests from the Teller House parking lot to the Cemetery. Depending on v... END_OF_DOCUMENT_TOKEN_TO_BE_REPLACED