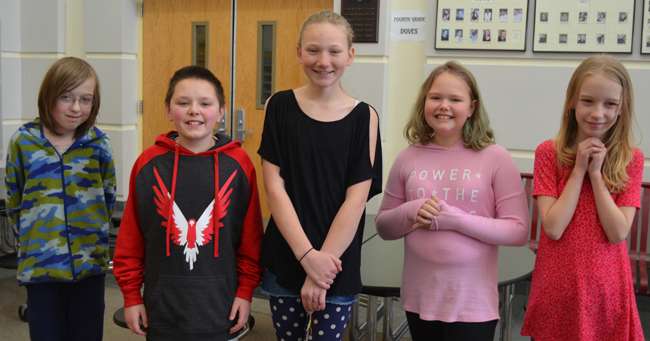 Jiselle Osteboe blasts through the competition to win top prize

Fifth grader Jiselle Osteboe was the queen bee at Gilpin County School’s annual spell-down on Thursday, February 1, in the school auditorium. Jiselle bored through five rounds of sticky words to win with “jackhammer,” meaning “a rock drill of the hammer type usually held in the hands of the operator.” Jiselle defeated a field of 110 students in fourth through eighth grade to capture the championship and the $100 first prize. She is eligible to compete in the state spelling bee on March 10 if she chooses to do so.

Seventh grader Peter Kniffen earned the second-place berth and a $75 prize. Third place was a three-way tie between fifth grader Colton Burlingame and fourth graders Ireland Simpson and Rosalie Kniffen, who will each receive $20. All other students received one dollar for each correctly spelled word. Prize money was donated by the Gilpin County Education Foundation, Central City Elks Lodge, Gilpin County government, and Central City government.

Students got a word list to study about three weeks before the bee. Scripps’ Rules for Local Spelling Bees were followed. The E.W. Scripps Company puts on the annual event, with competitions at the local, state, and national level. The purpose is to help students improve their spelling and vocabulary and develop correct English usage.

After all the rules were explained to the students, they spelled their own names during a practice round to get accustomed to walking across the stage, facing the judges, and speaking clearly into the microphone.

It was the judges’ responsibility to uphold the rules and decide whether or not each word was spelled correctly. Spellers were allowed to ask the pronouncer to repeat a word, define it, or give it in a sentence. They were to say the word, spell it, and said the word again. There was no penalty for spelling a word without pronouncing it.

The kids were giggly with nervous anticipation. Round one began with the word “sunny” and progressed with a sort of horticultural theme, as the spellers worked their way through “garden,” “harvest,” “rose,” “thorn,” “compost,” and even “manure.” One particular poser during this round was the word “bookmobile” – the young lady who received this word candidly confessed that she had no idea what that was. (Those of us who frequented the library on wheels back in the day will remember.) The technical generation easily grasped “tablet,” however, defined as a small, portable computer. Most of the students spelled their words correctly, but nearly 50 students were spelled down during this round.

The second round gave more “tribulation” as the words increased in difficulty. Ten students were promptly eliminated with terms like “ricochet,” “merengue,” and “labyrinthine.” Spellers’ facial expressions ranged from baffled to amused to panicked. They all made a pretty good effort, offering at least a phonetic spelling, if nothing else. “Good try!” offered a teacher or buddy as a child made his or her way to their seat after being spelled down.

There were enough students participating and spelling correctly that Schuessler had to start giving additional words provided in the pronouncer guide. He chose to skip some particularly problematic words, such as “coquelicot,” “piece de resistance,” or “ichthyosaurus.”

Altogether, 58 students went down during round two, leaving five hardy souls to sweat it out in rounds three and following. Three students were spelled down during the third round, and only two words were spelled correctly: “harness” and “diamond.” Two students, Jiselle and Peter, remained for round four. Jiselle correctly spelled “amigo” (a Spanish word for “friend”), while Peter missed “chestnut.”

Jiselle was the lone speller remaining for round five, the anticipated championship word. If Jiselle missed it, a new round would be started with all spellers. Would she succeed?

She did it! Congratulations to Jiselle Osteboe, the 2018 winner of the Gilpin County School Spelling Bee! 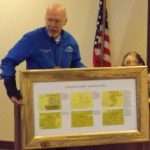 Gilpin license and permit fee revenues double in 2017
Next Article 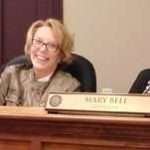