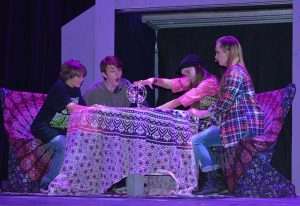 A story for everyone who has ever felt confused, alone, or overlooked

A Wrinkle in Time, presented on April 20, 21, and 22 by the Gilpin County Players in the Gilpin School auditorium, was the culmination of several months of work by dozens of students from elementary through high school and many supporting adults.

The play “is an exploration of transcending through time, but more importantly, a transcendence to find inner beauty and self-acceptance,” explained Hannah Raynes, director of the Gilpin Theatre Department. “There’s no better message to send to students than to accept themselves in a world that’s always telling them to conform.”

A Wrinkle in Time has a plot with many elements. Meg Murry, a high-school student who is troubled and insecure, is worried about her father, a physicist who works for a top-secret government agency on space-time travel experiments. He has been missing for over a year.

The play begins with the arrival of Mrs. Whatsit at the Murry house on a dark and stormy night. She seems to be a tramp but is really a celestial being. Mrs. Whatsit tells Meg’s mother of the existence of a tesseract – a “wrinkle” in space and time. Meg must travel through this wrinkle to rescue Mr. Murry.

Meg, her brilliant younger brother Charles Wallace, and a spacey teen friend named Calvin learn from Mrs. Whatsit and her friends, Mrs. Who and Mrs. Which, that the universe is threatened by a great evil called the Dark Thing. Several planets are already under this force, including the planet Camazotz, on which Mr. Murry is imprisoned.

The three Mrs. W’s transport the young people to Camazotz to find Mr. Murry. On Camazotz, all objects and places look identical, because the whole planet is controlled by IT, a giant disembodied brain. Charles Wallace tries to fight IT with his superior intelligence, but he is overpowered and becomes a robot-like figure controlled by IT.

Charles leads Meg and Calvin to Mr. Murry. Together, they confront IT but are unable to withstand IT’s evil power. At the last minute, Meg, Calvin, and Mr. Murry escape and “tesser” away to a gray planet called Ixchel. Charles remains a robotic prisoner on Camazotz.

Ixchel is inhabited by creatures resembling tall haystacks, Beast and Aunt Beast, who care for them. The three Mrs. W’s appear again to tell Meg that she must go alone to rescue her brother. They tell her she has one thing that IT does not have, and this will be her weapon against IT, which she must discover for herself.

Back on Camazotz, Meg realizes that her secret weapon is her ability to love. By focusing on her love for her brother, she is able to restore him to his real self. She frees him from IT and tessers with him through time and space, landing in the family’s garden on Earth. The story ends with a joyful family reunion.

The play would not have been possible without the efforts of multiple talented individuals on the student tech crew, the elementary theatre team, and the production team, headed by director Hannah Raynes and her husband, tech director Ryan Raynes.

Although the story was based on a book written in the 1960s, the director decided to set the play in the ‘90’s, a time when the Internet was new, a time before cell phones and social media.

The technical crew brought time travel to life by constructing a huge tesseract, with black sheeting stretched over a geometric frame ringed with green lights. Slits in the sheeting permitted Meg, Charles, and Calvin to step through into the next dimension while strobe lights flashed eerily.

The main set was “stagnant,” a two-story set that stayed in place throughout, with a few pieces that were moved on and off for the various scenes.

Director Raynes highlighted the purchase of nine new LED lights for the stage, made possible by a grant from the Alan Green Memorial Foundation, and on-line ticket sales, an exciting new feature that went live just a couple of weeks before the play.

Opening night was preceded by a taco dinner fundraiser hosted by the Gilpin cheerleaders. Also, a fundraising car wash was put on by the theatre students at the Gilpin Car Wash earlier this month.

The movie production of A Wrinkle in Time will be a suitable follow-up to Gilpin’s play. Watch for it coming out in January 2018, starring Reese Witherspoon and Oprah Winfrey.

END_OF_DOCUMENT_TOKEN_TO_BE_REPLACED

Benefitting the county, schools, and much more By Don Ireland   This year marks the 30th anniversary of casinos opening in the former little mining towns of Black Hawk, Central City and Cripple Creek, Colorado. In those early years, smoking was allowed inside ... END_OF_DOCUMENT_TOKEN_TO_BE_REPLACED

Benefitting the county, schools, and much more By Don Ireland   This year marks the 30th anniversary of casinos opening in the former little mining towns of Black Hawk, Central City and Cripple Creek, Colorado. In those early years, smoking was allowed inside ... END_OF_DOCUMENT_TOKEN_TO_BE_REPLACED