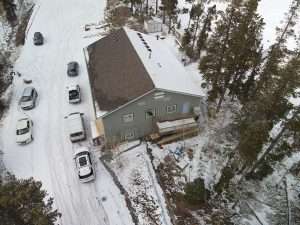 Gilpin Board of County Commissioners (BoCC) held their regular meeting on February 16, 2021 to address many issues such as the Hazard Mitigation Plan update request for proposal, the Gilpin Ambulance inspection report, and to discuss possible dates for the Gilpin County Fair.

Public Health Coordinator Bonnie Albrecht announced that only three positive test results were reported in the last week bringing the positivity rate to 3.39%. Gilpin County remains in the COVID dial “blue” status which is less restrictive than the surrounding counties. New amendments to the Public Health Orders from the state released over the Valentine’s weekend increases the calculated room capacity to 225 people in counties that are in Blue status and that table games are allowed in levels Blue, Orange, and Yellow. State authorization to incorporate the 5 Star program into businesses in the County is expected to be finalized sometime this coming week, but as Ms. Albrecht pointed out, that will not allow approved businesses to increase capacity now that we are in Level Blue. There have been 947 vaccines all together distributed to County residents, with 546 first doses and 401 second doses. In our age 70+ crowd, 319 first doses and 256 second doses have been administered with only 89 age 70+ residents remaining before the immunizations can be opened up to the age 65 group. The County is receiving about one hundred vaccines every other week which restricts the number of doses Public Health can administer. Testing has resumed on Thursdays from10 am to 2 pm on an appointment-only basis. To schedule a test, go to the Gilpin County Public Health website www.gilpincounty.org/departments_offices/public_health_agency and select “COVID-19 Testing.”

Gilpin County Emergency Manager Nathan Whittington announce that Gilpin County Emergency Operations Center is considering a plan with Jefferson County and Clear Creek County to institute a better plan to manage resources. If inclement weather is present such as was experienced last week, then Jefferson County, which temporarily halted vaccines due to the weather, can move more vaccines to Gilpin or Clear Creek Counties to back-fill the needs.

Gilpin County Planner Stephan Strohminger and Gilpin County Emergency Manager Nathan Whittington presented a Request for Proposal (RFP) for the Hazard Mitigation Plan Update. The delivery of the final draft plan to Gilpin County will take place no later than November 30, 2021. Submittal of the final draft to the Colorado Division of Homeland Security and Emergency Management for review needs to take place before the current Plan expires in March 2022. New requirements that the Hazard Mitigation Plan must contain details on how the County will respond to a pandemic situation and recognize the various response scenarios as a result of climate change. A motion was made by Commission Sill to initiated the RFP for the FEMA Hazard Mitigation Plan, seconded by Commissioner Hollingsworth, and was approved unanimously.

Gilpin County Emergency manager Nathan Whittington also presented the “Ready, Set, Go” grant application to the Commissioners which will cover the cost of portable chipping machines located about in the County. The plan is to identify three or four central locations in the County where there might be a need for chipping operations. Residents can bring slash to the chip site for chipping rather than go to the main slash pile for the same service. There is a 25% ($485) match for the grant which can also be accomplished with in-kind totals of $28.02 per hour volunteer rate with a requirement of 150 hours and some supplies which will result in a zero cost to the County. Gilpin County Commissioners approved the “Ready, Set, Go” grant application unanimously.

Dispatch received 306 (911) calls for assistance from folks in the County.

The Sheriff’s Department oversees 9,260 pieces of evidence with an additional forty pieces logged in and 69 pieces disposed of during the month of January.

Detentions took in fourteen individuals into the jail for various reasons but as Sheriff Armstrong pointed out, due to COVID, intakes have been restricted. But as the year goes on and these restrictions are lifted, Detentions are expecting an increase in these numbers.

The kitchen has prepared 1,309 meals which included 429 senior meals for the Meals-on-Wheels program.

Significant events for the month of January were:

–A Deputy responded to a report of an assault on a Gilpin Ambulance EMT by an intoxicated individual.

–A Deputy intervened with a motorist who had attempted suicide on the side of the road.  Inside the vehicle, several empty prescription bottles were found. The deputy contacted dispatch and the party was taken to the hospital for treatment.

–A Deputy also responded to a possible Carbon Monoxide (CO) poisoning inside a residence in which the victim was transported for treatment at a local hospital.

Sheriff Armstrong cited other incidents in which Sheriff’s Deputies were able to provide life saving services throughout the County.

Gilpin County Commissioners thanked Sheriff Armstrong for the in-depth report that increases community awareness of the great job that the Sheriff’s department is doing.

Gilpin County Chief Deputy Clerk Ashley Martin presented the Gilpin County Clerk and Recorder’s Report for the month of January 2021. Ms. Martin pointed out in the report that funds collected are down over $38,000 from January 2020. Appointments for motor vehicle registration are booked up until March 23, 2021. Renewals can be made through the mail or online at https://mydmv.colorado.gov. To save the price of a stamp or if you just want to get some fresh air, vehicle registration renewals can be dropped off at the ballot box outside the courthouse. Ms. Martin assured everyone that the Clerk and Recorder’s office collects the contents from that box every day.

Gilpin County Deputy Clerk Sharon Cate presented the annual ambulance inspections which were performed by Eric Smith. Is was concluded that all five ambulances are supplied with the requisite equipment to meet the applicable certification standards. In a letter from Mr. Schmidt to the Commissioners, “Gilpin County Ambulance Authority once again demonstrated a strong commitment to providing high-quality professional emergency medical services to the community, even in the face of a global public health emergency. The staff at Gilpin County Ambulance Authority should be commended for their outstanding service.” All five inspection reports were unanimously approved under one motion.

Gilpin County Attorney Brad Benning reported that the property zoning violations reported at 26 Hornblende have still not been resolved, but the resident has submitted a plan to license all the vehicles on the property through the DMV. But as reported earlier, this might take a while.

Gilpin County Manager Abel Montoya reported that the Human Services/ Public Health building is scheduled to have a Certificate of Occupancy issued this week. The Human Services server will be installed the weekend of February 19-21, with Human Services moving in and hopefully open for business the 22nd.

Human Services was awarded Community Development Block grant for $97,000 to refurbish the current Public Health trailer into the new Gilpin County Food Bank. The grant will cover costs for a new concrete pad and electrical installation for a new walk-in cooler that was already awarded to the Food Bank, a new roof for the trailer, and to update the trailer to be Americans with Disability Act (ADA) compliant. Tentative move-in date will be June or July 2021 with some changes. Instead of receiving prepacked boxes, recipients will be able to shop for the needs of their families.

Parks and Recreation Director Gabrielle Chisholm proposed July 24, 2021 as the date for the Gilpin County Fair. The Commissioners unanimously approved a motion to set the fair on the July date.

Gilpin County Commissioners are planning on attending a hearing on March 8, 2021 at 3:30 pm with State Representative Tami Story and the Public Utilities Commission to discuss concerns with Colorado Natural Gas (CNG). An employee from CNG brought up some serious issues with the method CNG used to bring natural gas into some County residences. It is reported that CNG tied the service line into already existing residential propane plumbing. Most of the connections were per code whereas others were questionable. CNG is planning on inspecting all the residences connections and bringing those questionable hook-ups to code. CNG has expressed a rate increase for all customers in order to pay for those inspection and repair costs. For more information go to the Gilpin website at www.co.gilpin.co.us or contact the Commissioners via email.

Gilpin County Board of County Commissioners approved the Meeting Minutes from the February 2, 2021 regular meeting and February 5, 2021 special meeting.

Gilpin County Commissioners passed a motion to adjourn into Executive Session per CRS-24-6-402(4) for discussion of a specific employee personnel matter and to confer with an attorney for the local public body for the purposes of receiving legal advice on specific legal questions.

The next Gilpin County Board of Commissioners online meeting is scheduled to occur on February 2, 2021 at 9:00 am. For more information check out www.co.gilpin.co.us.

END_OF_DOCUMENT_TOKEN_TO_BE_REPLACED

Benefitting the county, schools, and much more By Don Ireland   This year marks the 30th anniversary of casinos opening in the former little mining towns of Black Hawk, Central City and Cripple Creek, Colorado. In those early years, smoking was allowed inside ... END_OF_DOCUMENT_TOKEN_TO_BE_REPLACED