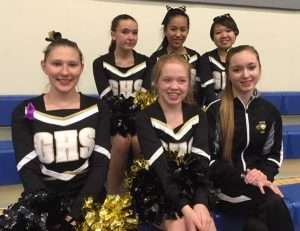 The Gilpin County varsity cheer team is award winning. Coach of the Year. Cheerleader of the Year. Team judged seventh in the state of Colorado.

This year, 12 girls signed up to be on the cheer team. Six of those girls – Anna Yocom, Cassidy Wood, Halle Yocom, Joleen Slack, Katelyne O’Sullivan, and Sarah Canalia – also committed to be on the competition team representing Gilpin County High School (GHS) at the Frontier League Spirit Championship and the Colorado State High School Activities Association (CHSAA) Spirit Championships. GHS competes in a bracket that includes the much larger 2A and sometimes 3A schools.

Recently, Head Coach Katie Yocom summarized the cheerleaders’ season to date. She said the competition team practices two days a week to cheer for GHS girls’ and boys’ sports. They practiced an additional two days a week to prepare a competition routine that included a chant, a cheer and a dance. They participated in homecoming festivities in October and the Veterans Day celebration in November.

The team members trained hard to be strong enough to perform each skill with the precision and unity required for their competitions. On November 15, they and their coaches, Katie Yocom and Sandi Oliver, boarded the bus and headed to Sheridan High School to compete in the Frontier League Spirit Championship (FLSC). This was Gilpin’s first spirit competition in 15 years, Yocom advised. Other teams in this event were Sheridan High School, Pinnacle, The Academy, and Clear Creek Dance team.

At the FLSC competition, Gilpin’s cheerleaders performed with excellence and were delighted to receive a couple of top honors. Anna Yocom was distinguished as Cheerleader of the Year out of 12 who were nominated. Katie Yocom’s fellow coaches selected her as Coach of the Year.

No resting on the laurels, however. The next competition came just a few weeks later – the Colorado State High School Activities Association Spirit Championships at the Denver Coliseum on Friday and Saturday, December 7-8. The competition cheer team boarded the bus at Gilpin at 6:30 a.m. Friday morning and were en route to State to represent GHS for the first time in 16 years. 245 Division 2A-5A teams, including cheer, poms, co-ed cheer, hip-hop and jazz had registered for the event. Five GHS cheerleaders competed in the 2A division.

Opening ceremonies commenced at 8:00 a.m., followed by competition starting at 8:20. Every two-and-a-half minutes, a new team was on the mat performing.

Once GHS had checked in and changed into their uniforms, they reported for warm-ups at precisely 9:33 a.m. on the stunt mat. Then it was on to the tumbling mat, and finally to the full mat. From there, the team was on deck at 9:45, and they started their performance at 9:58, full of nervous energy.

Each team that Gilpin competed against had eight to 16 athletes, increasing those teams’ opportunities to perform more complex stunts and limiting the visibility of each cheerleader, Yocom said. As the team with the fewest number of athletes of all teams competing, the pressure on the Gilpin team was more intense, as each cheerleader knew she would be clearly visible to each judge. Any misstep or mistake would be seen.

“The cheerleaders hit every pyramid, jump, and stunt,” Yocom reported. “Their dance was precisely executed, as was their cheer and chant. The Eagles left the mat with pride after their best performance of the year!”

The team, coaches and fans watched the remaining 2A and 3A cheerleaders perform, waiting for results that would be aired at noon. Only four teams would move on to the finals.

When the announcement came, the Gilpin team members expressed some disappointment at missing the cut, but were pleased to learn that of the 13 teams in the 2A division cheer, Gilpin had earned a respectable seventh place, Yocom related. The finals were held on the evening of December 8.

According to the CHSAA website archives, Gilpin cheerleaders competed in 2001 and 2002. In 2002, GHS took fourth place in the finals.

The team was still spirited upon their return home. At the next practice, the coaches and team reviewed the State competition and already started planning changes they want to make for next year.

“Cheerleading is a unique sport,” Yocom explained. “It has the longest season of the sports at Gilpin County School, starting in August and concluding in February or March, depending on playoffs. Each cheerleader must perform each skill with precision, in unison with the rest of the team, with spirit and enthusiasm, no matter what.”

Yocom said that each cheerleader performs for the entirety of each game and competition; there are no substitutions or alternates. Like all sports, each cheerleader depends on her teammates to know the sports they cheer for, to know all of the cheers, chants and dances, and to perform with strength, endurance and precision in order to be successful.

The GHS cheerleaders are currently performing for the winter sports and look forward to performing before a Denver Nuggets basketball game on January 26.

END_OF_DOCUMENT_TOKEN_TO_BE_REPLACED

Benefitting the county, schools, and much more By Don Ireland   This year marks the 30th anniversary of casinos opening in the former little mining towns of Black Hawk, Central City and Cripple Creek, Colorado. In those early years, smoking was allowed inside ... END_OF_DOCUMENT_TOKEN_TO_BE_REPLACED