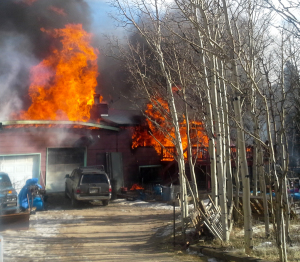 A rental home at 412 Chalet Drive in Gilpin County burned to the ground on Sunday, November 30. The fire was caused by a butane tank explosion that happened just after 11:00 a.m. that morning.

The Gilpin County Sheriff’s Office, first to respond to the scene, confirmed that 60-year-old Leland Baker was doing a butane hash oil extraction on the property when the explosion occurred. Hash oil is extracted from marijuana, using a chemical process that is highly volatile and dangerous.

Baker was burned on his hands and transported by Gilpin Ambulance to St. Anthony Hospital.

He escaped from the house through a window with the help of a neighbor, Ryan Erickson of 425 Chalet Drive, and a passerby.

Niko, a dog inside the residence, was singed and was taken to a local veterinarian to recover. Neighbors reported that there was a second dog in the home, but at press time, it was unknown what happened to that dog.

Erickson told 9NEWS in an interview that he was sitting in his living room Sunday morning when he heard the explosion at the neighbor’s house across the street. Erickson said, “I yelled down the driveway if anyone needed help, and I got a response of a gentleman hanging out the window. He was burned, and I could tell the rest of the house was going to catch on fire pretty quickly.”

Erickson ran to the window, pulled the man out, and dragged him to safety just before the entire home was consumed by flames.

Timberline’s fire chief, Chris Schimanskey, said response to the scene was quick, but “the structure was already completely involved. Fifty percent of the roof was gone, and it was spreading into the wildland.”

Schimanskey said the fire was controlled in a little over an hour with a combination of water and foam, but firefighters spent about six hours before clearing the scene around 5:00 p.m.

“I’m very proud. Our people did a fantastic job under difficult circumstances,” he said. “None of the responders was injured. I’m also very proud of the way all the agencies worked together.”

Law enforcement officials are investigating whether or not to charge Baker.

END_OF_DOCUMENT_TOKEN_TO_BE_REPLACED

Where the dead get to tell their story By Jaclyn Schrock On Saturday, August 21, the Gilpin Historical Society held their annual Cemetery Crawl. Tickets allowed the shuttle of hundreds of guests from the Teller House parking lot to the Cemetery. Depending on v... END_OF_DOCUMENT_TOKEN_TO_BE_REPLACED