Gilpin County Fair sure to please with new attractions 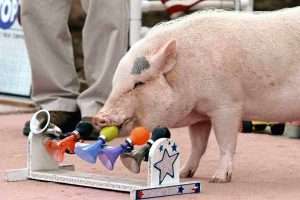 The 26th annual Gilpin County Fair kicks off in just days now, so get ready for the big shindig! The event gets going on Friday evening, August 17, at 7:00 p.m. with the new Zombie Paint and Shoot Party and the first ever crowning of Fair royalty. It continues through 3:00 p.m. on Sunday, August 19.

The Play with Gravity motorcycle stunt show, with riders Shad Petersen and Sam Meyerpeter, will be featured several times throughout the weekend. We’ll be watching Shad and Sam perform jumps and wheelies on European-made trials bikes built specifically for competitions. Shad pilots an Italian Beta, while Sam will be astride a Spanish Sherco. Both have 300cc motors and are lightweight at just 150 pounds.

“They are stock bikes, not modified. We just take the headlights off,” Shad advises.

“We do a lot of work for Feld Entertainment,” Shad explains. “Feld does Disney on Ice, Marvel Universe Tour, Monster Jam, and Super Cross.”

Shad got into the motorcycle stunt biz simply “through blind luck,” as he puts it. Back when Shad was 17 (he’s 32 now), his uncle had an older trials bike that he let Shad ride. Somebody recognized Shad’s potential and suggested he go to a trials competition.

“I was awful at it – I can’t stress that enough — but I had a lot of fun and it interested me, so I just kept riding. My buddies and I went to competitions and got to be okay at it.”

Shad’s hometown, Casper, Wyoming, had a competition in 2003. The local club built a trailer with a few obstacles to ride over so the members could do demonstrations at various events.

“The events came and went, and the club was like, ‘we don’t have any use for the trailer, so do you want to buy it?’ I had an idea to do this for a living, and it made sense at the time, so I bought it and made calls and arranged shows. I joined various organizations and built a new trailer and new obstacles.”

Shad now performs full time as a motorcycle stunt rider. He has a “regular” job as well, as a respiratory therapist at a hospital in Lander, Wyoming.

“If you do things right, it feels like you just float to the top of things. It’s a neat feeling, like dreaming you can fly.”

Riders don’t use a lot of protective gear, just helmets, gloves, and boots. Shad has never been injured in a performance or competition, but he did have a rider who had to be sent to the hospital once in Afton, Wyoming, after he fell off the top of the trailer.

“A lot of it is a calculated risk,” Shad concedes. “Do you think you can legitimately pull it off? If not, is there a place to step off the bike? If you don’t make it up certain ramps, can you jump off or fall to the ground if it’s not too far?”

Shad has advice for kids and teens who want to get started doing what he does. “It was never my goal to get good, and I thought I started too late. The pro level seemed too far above what I could get to. I just really enjoyed it and did it a lot. Ride in competitions with your local club. The big thing is to ride a lot and have fun.”

Fair patrons will see the experts from Rocky Mountain Flyers pilot their drones in the arena and perhaps even try one themselves!

Dave Beightol from Rocky Mountain Flyers gave the low-down on the many uses for drones.

Dave and his wife Karen had been computer and tech geeks and professional photographers for decades. They retired from those pursuits into the natural food industry and opened Burger Joint Natural Grill in Central City. Then they became curious about drones.

“About three years ago, we discovered flying drone cameras and could not resist learning about them,” Dave relates. “We bought some cheap toy drones and learned to fly them. Once we felt good with them we started spending more on them. We now have a fleet of drones of all sizes and for many purposes.”

Dave and Karen fly their drones all over the Gilpin, Clear Creek, and Jefferson County areas, always using an app to be sure they are in a safe-to-fly area.

Dave assures, “We never fly along over people, busy roads, wildlife, or airports.”

“We also teach people how to fly at all levels — everything from toys to UAV’s costing thousands of dollars and capable of flying for miles. We sell and fly them at Burger Joint.”

The Gilpin County Fair is the Beightol’s first official event. In addition to their arena demonstration, they will have a booth where they will show people all about drones. They will also have toys for sale.

“It will be flying on a preset automatic mission at a safe level and speed,” Dave reports. “We will also be doing a short GPS guided drone flight in the arena area so people can see just how smoothly they fly.”

Drones are available where toys or electronics are sold. The toys cost about $20 to $50. High-end drones are found at camera stores and online at Amazon. These are more sophisticated and easier to fly than the toys, but cost from $300 to $1,500 and up.

No, we aren’t talking Harleys here. These are honest-to-goodness potbellied pigs. They’re famous, too, having appeared at countless fairs and on television and stages from New York to California, including America’s Got Talent and the Tonight Show with Jay Leno.

John Vincent, the pigs’ owner and trainer, gave a sneak peek at what we can anticipate in this fun, family-friendly show, which will be presented on the stage in two segments on Saturday.

“I’ll be bringing two pigs – Mudslinger and Digger. They’ll perform a crowd favorite – playing sports. They do soccer, basketball, ride a skateboard, and even get mail out of a mailbox. The show is humorous, as the pigs do impressions of Stevie Wonder, Elvis Presley, and Michael Jackson.”

John praises the virtues of these sociable animals.

“Pigs are brilliant. They are the rocket scientists of the animal world. What makes them so fun is that they are fantastic problem solvers. They can figure out the end goal and skip steps as they work to the end.”

Most of his pigs have come from pig rescues out of New York. “Just like dogs, there are a variety of reasons why people would get a pig and then abandon it,” he informs. “I got Mudslinger from the rescue when he was about six months old. I had been training pigs for a while and was looking for a pig I thought would fit into the show. He seemed like he had the right personality. He’s just great, a wonderful animal and very nice.”

Digger has a dominant personality and doesn’t mind getting in trouble, John chuckles. “He’s a bold animal to have in the show, and I like that. Mudslinger is white and Digger is black, and they are as opposite in personality as they are in color.”

Fun facts about Mudslinger and Digger: Mudslinger is ten, and Digger is nine. Both weigh about 85 pounds. They are pickier eaters than people might think. They love to be outside in nice weather and are very clean. A fun fact about John is that when he is not training his pigs, he is working as an aerospace engineer for Lockheed Martin – quite a contrast.

In general, John says, pigs are not a very good pet for a lot of people.

“They are not a good pet for children, because they don’t play with you. My wife likes to compare them to dogs. Having a dog is like having a five-year-old child that wants to play, but having a pig is like having an adult. If there is nothing to do, they can do their own thing. But they are very affectionate for the right people.”

John transports Digger and Mudslinger in a van. They walk up a ramp into the van, climb onto a big bed with blankets, and go to sleep, usually getting up only when he goes through a drive-through.

“They know they’ll be getting French fries,” he laughs.

John got involved in working with pigs about 25 years ago.

“In the 1990’s, the potbellied pig craze was on. I was fascinated with pigs. So I got one, took him home, and started training him. He really learned fast, and people enjoyed watching him do tricks. I began to think there might be something to this. So I got two pigs and started doing performances.”

Top Hogs is based in Franktown (no irony intended) on a 25-acre ranch. In addition to the pigs, other animals live on the ranch and perform in shows, including parrots, dogs, and burros.

END_OF_DOCUMENT_TOKEN_TO_BE_REPLACED

Benefitting the county, schools, and much more By Don Ireland   This year marks the 30th anniversary of casinos opening in the former little mining towns of Black Hawk, Central City and Cripple Creek, Colorado. In those early years, smoking was allowed inside ... END_OF_DOCUMENT_TOKEN_TO_BE_REPLACED

Where the dead get to tell their story By Jaclyn Schrock On Saturday, August 21, the Gilpin Historical Society held their annual Cemetery Crawl. Tickets allowed the shuttle of hundreds of guests from the Teller House parking lot to the Cemetery. Depending on v... END_OF_DOCUMENT_TOKEN_TO_BE_REPLACED