Gilpin County Fair gears up to celebrate its Silver Anniversary! 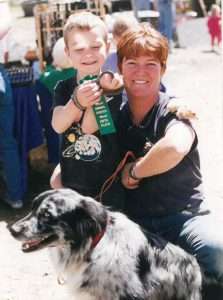 Locals reminisce about the early days of the fair

Gilpin County residents are looking forward to the Gilpin County Fair, which will take place at the County Fairgrounds on Saturday, August 19 and Sunday, August 20. This year’s event is extra-special: it’s the 25th anniversary of the free community celebration.

This year’s fair features a special 25th anniversary booth, which will be located near the grandstands. People can come by and record their memories of past years of the fair, and a brief DVD will be produced that will be available after the fair for $8.00. Also see all of the past year’s fair t-shirts compiled in a beautiful quilt made by the Gilpin County Stitchers. Get a 25th anniversary t-shirt; these will be given out during arena and stage performances throughout the weekend.

The fair’s schedule and contest information can be found at GilpinCountyFair.com.

The fair’s wide scope of events is presented at Gilpin County’s modern barn, arena, and community center facilities. It wasn’t always that way, though. The early years of the fair were filled with rustic fun mustered on a shoestring budget.

The Gilpin County Fair began in 1992 as the idea of Leslie Williams, Sue Ann Kopmeyer, and Ralph Knull, who thought, “Other counties held fairs. Why not Gilpin County?”

The first fair was held at the field where the ball parks are now located. It was then moved to where the health building is, and then to its present location in the Gilpin Community Center complex.

Although there were only a few folks involved on the first fair board, more than 15 people attended a recent meeting of the board. Several of these individuals contributed their thoughts on past fairs.

“One of the early attractions was a band — something with ‘heart’ in the name,” recalls Linda Watson. “It was just me and one other person sitting under the big top watching. I felt bad for the band, so I stayed.”

Gigetta and Ken Nadeau attended their first fair when they moved to Gilpin County ten years ago. Their son Dante, very young at the time, got to the top of the climbing wall and refused to come down, so Ken had to go up after him.

“We’ve never missed a fair,” Gigetta relates. “It’s one of the best free events in Colorado. And you can let your kids roam and know they’ll be safe.”

Vicki Nemec became involved with the fair in its third year and was its coordinator through 2015. It began with simple activities under Army tents; when gaming came in, there was money to expand to better equipment and more events. About 200-500 folks attended in the very early years. Vicki is grateful to the County Commissioners for supporting the fair over the years.

“Leslie Williams (a former County Commissioner) coordinated the vendors,” Vicki explains, “and Casey Newman did most of the animal events. If it were not for Casey, there may not have been any animal events.”

Casey Newman is indeed the one to talk with; she is well known to many Gilpinites for her work in dog agility and has been involved with the fair since its beginning. As in past years, she will coordinate the dog agility contest at noon on Saturday of the fair.

Casey recalls the Gilpin County of 25 years ago. “There were still a lot of summer cabins up here. We had sheep and started a group in Boulder for breeders of colored sheep.”

She ran Gilpin’s first 4-H group, which was being operated from Boulder County because there was no facility in Gilpin.

“We had never had a fair here, because Gilpin is not an agricultural county. We didn’t have an ag base for livestock and crops,” she says. “There were just mining and drilling contests. We put something in the paper looking for folks who might be interested in a fair.”

The first fair was operated on a very small budget. Some Road and Bridge guys came and cut lodgepole pines and dumped them where the present ball fields are and put them up for an arena, Casey remembers. In years to come, the fair alternated on one side of Highway 46 or the other, “depending on whether Fred Weber (a well-known and loved Little League coach) had his ball fields up or not!”

“We had Army tents. We had the mine rescue cage and the United Power cherry picker as our only rides. My 4-H kids led my horses around through the trees for 50 cents a ride, and I brought 13 or 14 of my sheep. We had mutton busting!”

“We filled surgical gloves with colored water and tied them around the sheep’s middle with baling twine. Then we gave each contestant a Dixie cup. They had to squirt the water into the cup without getting knocked over. It was almost a blood sport!”

Sheep shirt wrestling was also a riot. Folks collected funny-looking clothes, like red long johns, silly dresses, socks, hats, and even underwear. Sheep were turned loose in the arena, and two contestants dashed in at the “go” and tried to catch a sheep and dress it. All comers were welcome to try, whether you were a kid or a grown-up.

“It was so popular after the first year that we had to run two heats a day on both days of the fair,” Casey remembers.

The first alpaca race was an obstacle course. Horses, goats, and donkeys were also raced, along with pot-bellied pigs and turkeys. Kids put packs on the turkeys and tried to herd them with little leashes on the turkeys’ necks.

“They finally gave up and picked up the turkeys and ran! We let them win!”

A children’s pet show featured every kind of critter from horses to hedgehogs.

“Sue Kopmeyer asked me what I wanted for ribbons,” Casey notes. “I told her ’40 blue ribbons. That’s it. Just 40 blue ribbons.’ After all, you can’t give a kid’s horse a blue ribbon and not give the hedgehog or hamster one, too.”

Casey’s memories include the comical saga of “The Wild Pig of Gilpin County.”

“We had a greased pig contest. A couple of county guys went up to an auction in Fort Collins to get the pigs. This was July, so there were no little pigs, just big ones, and they were pretty expensive. So they got four potbellied pigs.”

The men took Casey’s horse trailer to fetch the pigs, returning after many hours.

“Finally, they returned, but with just three pigs. One had escaped and was running loose. We had pig sightings for months! Somebody finally cornered and caught it. We planned to auction the pigs off, but nobody wanted to buy them. It was pretty funny!”

For early-day mutton busting, cattle panels were dragged over and a pen set up. Kids donned protective head gear of all sorts – football helmets, bike helmets, whatever. Nederland Feed donated straw, so if kids fell off, they had a soft landing.

“Some years we were knee-deep in mud. We kept shifting the dates around, trying to find a time when it wouldn’t rain so much!”

After a while, food vendors began to participate, and eventually there were rodeos. Horse gymkhanas were run. “There will be one this year, too,” Casey advises.

Dog agility is Casey’s special area and a popular event each year. “At first, all of our stuff was handmade. The dogs jumped over chairs and brooms.”

She gave kudos to Nederland Feed. “They sponsored us forever, giving us hay and grain, straw and prizes. There were faithful from the beginning.”

Dog agility is fun, she says, because it’s not just the fastest and best dogs that win. Everyone gets a chance. The three judges now include Casey, Ken Reed in his wheelchair, and Ken’s service dog, Captain Hook. Every dog gets a ribbon and a stuffed toy.

Casey has many creative ideas for future fairs, including a classic car show, home brewers and microbrewers competitions, batting cages, and more. Although this year’s fair is pretty well set, she encourages individuals and organizations to contribute their ideas going forward and to get involved by working and/or sponsoring a booth or event.

“If we get people in the county to pull together and get more of a community feeling, that’s what it’s for.”

So please come and enjoy the fair, make your own special memories, and look for ways to contribute!

END_OF_DOCUMENT_TOKEN_TO_BE_REPLACED

Where the dead get to tell their story By Jaclyn Schrock On Saturday, August 21, the Gilpin Historical Society held their annual Cemetery Crawl. Tickets allowed the shuttle of hundreds of guests from the Teller House parking lot to the Cemetery. Depending on v... END_OF_DOCUMENT_TOKEN_TO_BE_REPLACED