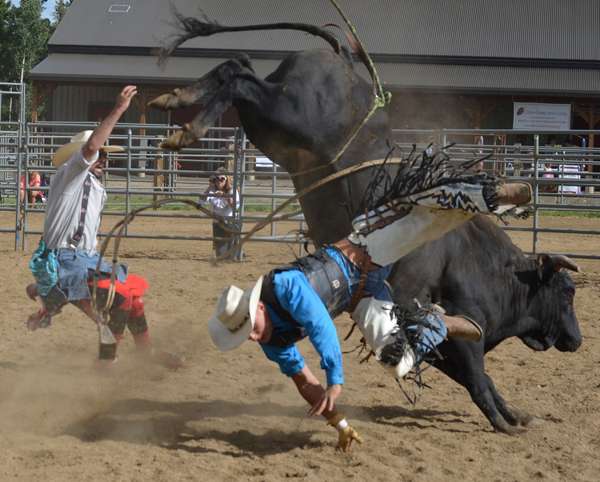 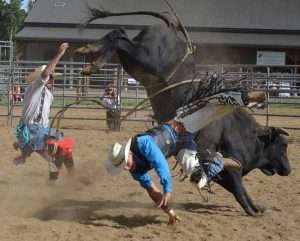 The 2015 Gilpin County Fair, held August 15-16 at the fairgrounds, boasted a full schedule of old favorites and new attractions enjoyed by a huge and happy crowd. Here are some highlights:

The main event and a huge draw was the bull riding, sponsored by the Fair’s newest partner, the Mardi Gras Casino. Daring bull riders exhilarated the crowd with fast-paced action as they tried to hang onto tons of twisting, bucking bovines for a “mere” eight seconds. Most had good rides and none, thankfully, were injured, although a few had encounters with those horns and hooves that had many spectators sucking air. The bulls seemed to enjoy sending their riders face planting into the dirt.

Each rider relied on his equipment: a thick leather riding glove to protect his hand and a rope to help him stay on the bull’s back. During the ride, he held on tight to that bull rope and squeezed hard on the bull’s sides with thighs and knees, using his arms for balance. Once the ride was over, the rider moved away quickly to avoid being stomped. Rodeo clowns and other assistants stood ready to distract the bull.

Kolton Gale, an 18-year-old senior at Chaparral High School in Parker, just started bull riding this year and felt good about his ride. Apparently, being a thrill-seeker is as necessary as having good skills and the right gear. “I love the adrenaline rush,” Kolton asserted.

While not exactly a “favorite,” the saying goes that if it’s raining, it must be time for the Fair. People expecting rain were not disappointed.

The pancake breakfast served on Sunday morning by the High Country Auxiliary was a must. Hundreds partook of the delicious pancakes, sausage, and scrambled eggs.

There were many new attractions also: a daredevil ropes course for kids, the prizewinning Nederland Robotics Team, a yard sign contest to choose next year’s Fair logo, and a fun run for kids and parents. The Mobile Vet Center provided help to Veterans and their families. Health and safety resources abounded, with a CPR workshop, chain saw safety, kids’ fire muster, and the inflated mega-brain raising awareness about signs of stroke.

The Fair’s first flag retirement and disposal ceremony inspired all who viewed it. The Mountain Rendezvous Chapter of the Daughters of the American Revolution (DAR) conducted the ceremony with the assistance of the Girl Scout Gold Nugget Service Unit, Cub Scout Pack 251, Timberline Fire and Auxiliary, Gilpin County VFW, Gilpin County American Legion, Central City Elks, and the Gilpin County Animal Response Team. Veterans formed a color guard of the United States flag, flags from the various branches of the armed services, and the POW-MIA standard.

The ceremony began with the commemoration of the 50th anniversary of the Vietnam War. DAR Regent Anne Skewes then spoke of respecting the flag. When a flag is too weathered to be a fitting emblem for use, it must be destroyed by burning.

Timberline Fire Chief Glen Levy and other officials placed a flag, one stripe at a time, into a contained fire. As each stripe was burned, the name and date of admission to the Union of one of the original thirteen states was read. Last, the stars were burned, representing the United States as a whole. The Girl Scouts and Cub Scouts then presented ten flags to be properly retired.

The ashes of the flags will be buried in the Veterans Memorial at the Gilpin Community Center.

The DAR’s flag chair, Kathleen Schrader, proposed the ceremony when she realized that children and adults alike need to know the proper way to retire a flag.

This was the final fair organized by Vicki Nemec, who has been its driving force for the past 21 years. As usual, she could be seen zooming around the fairgrounds in her golf cart, making sure that everything was running smoothly.

Vicky plans to retire in September 2016 or sooner and possibly make a move to Grand Junction. She is training her replacement, Heather Pearce, who handled many of this year’s arrangements. Vicki is grateful that Heather and others have been helping out.

“Sue Ann Kopmeyer and Commissioner Leslie Williams started the fair originally,” Vicki noted. “Then Sue Ann got a job in Michigan, and I took over.”

The fair was held at the ball fields for the first two years, then moved to a dirt lot near the present Community Center location.

“It rained every year, and we kept moving it back later in August,” Vicki recalled.

The Fair began with army tents; when gaming came in, there was money to purchase canopies, which are still in use after 20 years.

Vicki advised that there is only half the funding available for the Fair compared with six or seven years ago, making it more challenging to organize the variety of events that Gilpin residents have come to expect.

Yet, she has managed it well. As County Manager Roger Baker noted, “That we have a great fair is due to her dedication, energy, and persistence.” 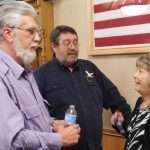