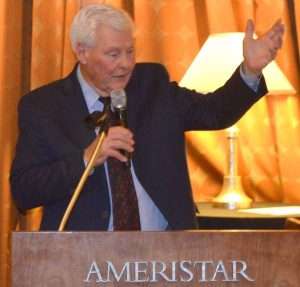 $10,000 had been raised in ticket sales and sponsorships prior to the dinner, and The Clinton Family Fund had provided a grant in the range of $5,000-$10,000 for GCEF’s Mt. Thomas Action Fund, which is used to help students who need financial assistance, such as with athletic uniforms, medical expenses, or school supplies.

Sarah Swanson, GCEF vice president, told the attendees that every dollar raised goes for scholarships. These are available not just for students attending Gilpin County High School, but for any student who lives in Gilpin County, including homeschooled students. She said GCEF was established in 1994 to provide funding for scholarships and other specific programs and projects. Its overall mission is to provide additional resources to better the education of Gilpin County students.

Guests enjoyed a time of socializing, followed by a three-course dinner with wine, raffle, and silent auction. About 30 Gilpin County School teachers, staff members, and administrators attended. Swanson thanked the teachers for their hard work and noted that the school had been accredited with distinction for the second year in a row.

She also expressed appreciation to the Ameristar for underwriting a portion of the event.

Katelyn Armstrong, a 2018 Gilpin High School graduate and recipient of a GCEF scholarship, spoke at the dinner. She is a freshman at Baylor University in Waco, Texas and is pursuing pre-medical studies.

“Baylor is a perfect fit for me,” she said. “However, it is very expensive. I applied for many scholarships and was relieved to get a GCEF scholarship. It has helped me get one step closer to my goal of becoming a doctor.”

Armstrong said her studies at Baylor have been tough, but she wouldn’t have it any other way. She is also keeping her options open as to whether to go into pediatrics, oncology, emergency medicine, or another field and knows her studies and medical residency will be a long road.

“But the next 11 to 18 years will fly by!” she joked, bringing a laugh from the audience. “It’s scholarships like this that help all students to achieve. I’m grateful for all who have supported me – especially my parents.”

Dad and mom Kevin and Kersten Armstrong got a hug from their daughter.

Swanson reminded the group, “The personal and academic growth of Katelyn and all Gilpin students are why we are here tonight. We started this dinner event in 2012 and have raised $50,000 since then. We’ve raised $10,000 already for tonight’s fundraiser.”

She indicated donation cards on the tables and asked each person to select a card that would suit their ability to contribute, then to fill it out and hold it up. Colorful cards were held high all over the room.

GCEF President Craig Holmes then introduced John Bandimere, Jr., who began by referring to Katelyn Armstrong’s dream of becoming a doctor. Bandimere connected with many in the room when he mentioned local physician Don Bennallack, whom he said had delivered his and his wife’s three children.

Additionally, many of the guests indicated by show of hands that they had been to Bandimere Speedway.

The guests heard the story of how Bandimere Speedway, a family operation, came to be. In the mid-1950’s, street racing was gaining in popularity, and Bandimere was having a great time racing his buddies. Finally, his dad John Bandimere, Sr., an auto parts dealer, decided to step in.

“He built the race track to get me off the streets!”

The idea was to have his son and his son’s friends have a safe place to learn about cars and racing, and the Speedway was begun in 1958. It was originally going to be built in Arvada, but protests from the neighbors squelched that plan.

“My dad didn’t want a fight. The county commissioners had already approved the drag strip, to be called ‘The Safety Proving Grounds of America.’ They found us a new location, and we built it where it is today in Morrison. The location was a Godsend.”

Track facts: The drag strip is one-quarter mile long and 5,280 feet high. The Speedway hosts 130-145 event days per year, and its season runs from April through October. Bandimere Speedway received sanctioning in 1968 from the National Hot Rod Association (NHRA). In 1977, it hosted the NHRA Sports Nationals for the first time. Bandimere and others developed the Compulink timing system in 1981, the standard for all drag racing timing systems. In 1991, Lori Johns became the first driver to qualify at the Mile-High Nationals as a “4-second driver.” 2009 marked the 30th anniversary of the Mile-High Nationals at Bandimere Speedway. The Speedway is also home to Action Karting and the MasterDrive driving school.

Bandimere related some of the trials his family has experienced.

“In 1986, my dad went to be with the Lord. We were asked to renovate the facility because the track was inadequate. Dallas Gardner, president of the NHRA, had expressed concerns. In all our years of operation, we had no running water or sewer, and we were visited by 420,000 people per year. We used porta-toilets. One time, the guy that was supposed to clean them was a no-show, so I cleaned them. Dallas saw me doing it, and I knew I was in trouble. He told me it was not appropriate for me to be doing that and issued an ultimatum – we had to rebuild.”

So the major renovation began. More earth had to be moved than was planned, and the Speedway ran over budget. The economy was bad, and its lender went bankrupt.

“It was the most stressful time in our history,” Bandimere shared. “My dad said ‘never borrow,’ and here was his kid deeply in debt. Finally, the Speedway was miraculously rebuilt, and we ran the Mile-High Nationals the next season. There were 32 liens on the project, but by 1989, all the lien holders were paid. It was a real blessing, and we gave God the glory for it.”

In the midst of the Speedway’s great success and popularity with its many fans, Bandimere said his main thought was not how much money was being made.

“It’s this – did we make a difference in someone’s life? I am immensely thankful and grateful. I’m less concerned with the bottom line than in investing in resources and relationship. Our Speedway is a platform for sharing hope and a relationship with Jesus Christ.”

Since the Speedway was originally built for kids, the Bandimere family has a passion for youth, families and teachers. Many in the audience were familiar with Bandimere Speedway’s “Race to Read” program, which promotes literacy by providing a race-themed incentive for preschool and elementary-aged students. The program was started in 1995 at Rooney Ranch Elementary School in Lakewood, Colorado.

Bandimere had also investigated the GCEF website and saw that its main purpose was to better the education of Gilpin students. He gave an encouraging parting word to the organization and audience.

“You are making an eternal difference in their lives.”

END_OF_DOCUMENT_TOKEN_TO_BE_REPLACED

Where the dead get to tell their story By Jaclyn Schrock On Saturday, August 21, the Gilpin Historical Society held their annual Cemetery Crawl. Tickets allowed the shuttle of hundreds of guests from the Teller House parking lot to the Cemetery. Depending on v... END_OF_DOCUMENT_TOKEN_TO_BE_REPLACED