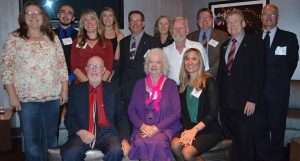 Funds available for any student living in Gilpin County

GCEF Vice President Sarah Swanson reported, “This year was by far our most successful event. We had 90 people in attendance and raised $14,000, including a $4,000 grant from the Colorado Department of Higher Education for scholarships to Red Rocks Community College.”

Sponsors were The Clinton Family Fund, The Isle of Capri Casino, The Saratoga Casino, the Reserve Casino (which underwrote most of the costs of the dinner), United Power, Base Camp and Pickle Liquor, Rebecca and Shaun Blondo, Sarah Swanson and John Bushey, Kim and Craig Holmes, and Rev. Richard Vickery. Swanson said the net after expenses was $12,707 for the scholarship fund.  The GCEF had opted for a carnival atmosphere this year, with Mardi Gras table decorations, balloons, and games such as ring toss, bean bag toss, and a flickin’ chicken tossing game. Playing the games afforded guests the opportunity to win raffle tickets for prizes later. There was also a photo booth where guests could dress in party garb and pose for the camera. Guests enjoyed the opening time of fun and socializing followed by a steak dinner.  Freshmen college students Sara Osteboe and Daniel Madrigal-Garcia received GCEF scholarships as 2016 graduates of Gilpin High School and spoke at the dinner.   Daniel is studying electrical engineering at Colorado State University.  “It’s been challenging,” he admitted, “but the rewards outweigh the hours of work.”  Daniel has enjoyed getting to know new friends and immersing himself academically. He also works at the CSU shop that distributes goods throughout the campus food courts.   Daniel was grateful for his GCEF scholarship and said that these funds, in addition to his job earnings, have helped greatly with his tuition. He assured the audience that he would try to make the most of his opportunities.  Sara also attends Colorado State University. She is undecided on a major yet, but is set on going into social work.  “I chose CSU for its excellent six-year major in social work and public health,” she said.   She reported being one of 76 students accepted for participation in a “Key Community” at the University. These communities assist students with their transition to and through the university. Sara’s key community participates in service and philanthropy.  Because of GCEF’s generous assistance, Sara has been able to participate in her key community without the need to take a job at this time. She noted that it is hard for families to afford college, and her scholarship helped give her the confidence to pursue other goals. She is committed to making the most of her education.

Earlier, guests had visited the prize tables and deposited their raffle tickets in goblets next to each item they hoped to win. It was time to draw the numbers and give away the prizes to the lucky winners.

Swanson reminded the guests, “Every dollar we raise goes for scholarships. These are available not just for students attending Gilpin County High School, but for any student who lives in Gilpin County, including homeschooled students and those living in the Boulder School District.”

This year, the Colorado Department of Higher Education committed $4,000 for students to attend Red Rocks Community College. GCEF was required to raise matching funds, which was easily done at the dinner. However, many students attend four-year colleges rather than a junior college, so GCEF wanted to provide as much money for those students as well.

“We need an extra $3,000 tonight. My husband and I are committing $1,000,” Swanson said. “If everyone here gave $25, we would make our goal. Every gift counts.” She challenged each person to make an extra contribution beyond what they had paid for the dinner, calling attention to cards that were on each table that guests could fill out and hold high to indicate their commitment. Cards were raised all over the room.

Leading up to Sen. Neville’s address, Swanson then affirmed that GCEF is not a political organization and urged everyone to “keep it about education.”

GCEF Board President Craig Holmes introduced Neville, a Republican member of the Colorado State Senate from District 16, which includes Gilpin County. Neville was elected to his seat in 2014. He was born and raised in Florida, has a degree in business administration from Regis University, and he and his wife have two sons and six grandchildren.

Neville explained that his mother died when he was seven, and he was the youngest in the family.

“Being the youngest, the money had dried up by the time it came to me,” he noted. “My father paid for my sister’s first year of college. My two older brothers went into the military. I graduated from high school the week before my seventeenth birthday and said I wanted to be on my own. I made a deal with my father: ‘If you sign the lease on my first apartment, I’m out of here.’ So he did!”

Neville related that after working for several months, he finally decided that he would like to go to college. He went to a junior college in Florida, studying hotel and restaurant management his first year. He paid his own way and “worked a ton of hours.” In his freshman year, he had an opportunity to win a scholarship. He did get it – a $150 award from the Howard Johnson Company.

“No one had ever given me anything before,” he marveled. It was the equivalent of two months’ rent on the apartment he was sharing or a whole semester of school.

At this point, the battery in Neville’s microphone died, and he joked about “politicians who talk too long!” He summed up his talk by saying, “You are here to give opportunities. The key is showing young people that you believe in them.” He advised not giving a student a four-year full ride scholarship.

“Give them a starter. And students – take advantage of every opportunity. Make it happen!”

END_OF_DOCUMENT_TOKEN_TO_BE_REPLACED

Benefitting the county, schools, and much more By Don Ireland   This year marks the 30th anniversary of casinos opening in the former little mining towns of Black Hawk, Central City and Cripple Creek, Colorado. In those early years, smoking was allowed inside ... END_OF_DOCUMENT_TOKEN_TO_BE_REPLACED