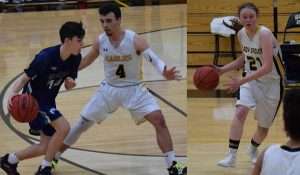 The Eagle’s head coach, Paul Hanson, made the following observations about last week’s boys’ varsity basketball games: “Our guys are starting to play better team basketball and have won 2 league games in the last couple of weeks. They played smart team basketball in the win over Denver Academy and had a solid showing versus Dayspring, however, they just came up a couple of plays short in that one, but did take a good team into overtime. I am optimistic that they can finish the season strong against Clear Creek and Nederland, and hopefully have some momentum going into the playoffs. This is a great group of kids and being relatively young, with no seniors, their future in competing in this league looks promising.”

Stephen King (4) led the team in scoring with 21 points followed by Trey Lindberg (3) with 15 points. Blake Boulter (25) and Triston DiPasquale (15) both led in rebounds each with 10. Nolan Lindberg (24) led in steals with 6 followed by Boulter (25) with 5. Following the Denver Academy game the Eagles’ boys wins vs losses this season are 2-8 for league play and 4-13 overall.

The Lady Eagle’s JV team scored 15 points in the 1st quarter of their game against the Mustangs. The Mustangs in turn scored only 4 points putting the Eagles up by 11 points and ending the quarter at 15-4 Eagles.

The Eagles came out tough in the 2nd half scoring 3 unanswered 2-point field goals, 1 each by Tommie DiMauro (13), Skyley Ramsey (12), and Abigail Smith (1). With less than half of the period left the Mustangs scored 2 2-pointers but were answered by the Eagles Smith (1) and Correa (3) each with a 2-point field goal. The Mustangs went on to score the last 2-pointer of the period making the score 38-18 Eagles.

The Mustangs tried to come back in the 4th quarter scoring 13 points the most they added in any single quarter. However, the Eagles were also able to score 13 points via contributions from Correa (3) with 3 2-point field goals, Purser (23) with 2 2-pointers, Kendra Wenholtz (32) adding 1 2-pointer, and DiMauro (13) with a free throw. The game closed with a score of Eagles 51 to the Mustangs 31.

Gilpin’s boy and girl’s varsities played against the Dayspring Christian Academy teams last Saturday, the 15th of February. The games took place on Gilpin’s home court at 4:00 pm for the girl’s and 5:30 pm for the boys.

The 1st quarter looked bleak for Gilpin with Stephen King (4) scoring the Eagles only 2 points on a fast break ending with a layup. Dayspring scored 13 points in the period with 4 2-point field goals, 1 3-pointer and 2 free throws. Gilpin ended the quarter with a 12-point deficit.

In the 3rd quarter Dayspring scored 10 points with 2 2-point and 2 3-point field goals. Gilpin scored 8 points with one 2-point field goal each by Lindberg (24), Boulter (25), Trey Lindberg (3) and Triston DiPasquale (15). The quarter concluded with Gilpin still down, this time by 3 points on a score of 29-32.

A 2-point field goal by Dayspring started the scoring in the 4th quarter giving them a 5-point lead. Gilpin’s King (4) responded with 2 3-point field goals in quick succession putting Gilpin 1 point ahead. Dayspring countered with a 3-pointer of its own regaining the lead by 2 points. Lindberg came back for Gilpin with a 2-point field goal tying the game at 37 to 37. With 24 seconds left on the game clock King (4) committed his 5th foul and was removed from the game. Just a few game seconds later Lindberg (24) also fouled out of the game. Neither team scored again before the final buzzer throwing the game into a 4-minute overtime.

Gilpin entered the 4-minute overtime without the benefit of either their top scorer or their top rebounder. Dayspring scored 2 2-point field goals in the 1st minute of the overtime. Lindberg (3) responded with a 3-point field goal about half way through the overtime putting Gilpin within 1 point of Dayspring. With less than a minute left in the game Dayspring jumped 3 points ahead with a 2-point field goal. Gilpin turned the ball over on their following possession and was forced to foul Dayspring in an effort to retake possession and hopefully complete a 3-pointer. However, Dayspring took advantage of the 1 and 1 free throw foul by completing both shots ending the game on a score of Gilpin 40 to Dayspring’s 45.

Gilpin’s girls’ varsity came out strong beginning the game with 2-point field goals by Skyley Ramsey (12) and Jessica Wilhelm (30) and a 3-pointer by Lena Warren (11). It wasn’t till roughly 5 minutes into the 1st quarter that Dayspring scored a 3-pointer followed by 2 2-pointers to tie the score at 7-7. Gilpin finished the quarter with a 3-point field goal by Abigail Smith (1) pushing Gilpin ahead on a score of 10-7.

In the 2nd half Dayspring, again, started the scoring this time with a single 2-point field goal. Gilpin responded with another run, this time, of 12 points contributed by

Dayspring scored with 3 2-point field goals for only 6 points during the 4th quarter. Gilpin scored 11 points with input by Ramsey (12) presenting a 2-pointer and free throw, Warren (11) donating 5 points with 2-point and 3-point field goals, and Ganz delivering 3 points in free throws. The game ended with Gilpin ahead by 23 points on a final score of 49-26.

END_OF_DOCUMENT_TOKEN_TO_BE_REPLACED

Benefitting the county, schools, and much more By Don Ireland   This year marks the 30th anniversary of casinos opening in the former little mining towns of Black Hawk, Central City and Cripple Creek, Colorado. In those early years, smoking was allowed inside ... END_OF_DOCUMENT_TOKEN_TO_BE_REPLACED