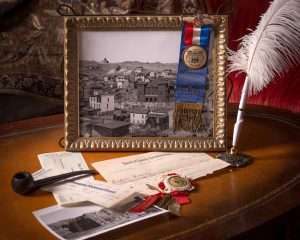 In continuous use since dedication on February 22, 1900

This past Monday the 22nd of February marked a somewhat special annual event that you may have missed. As we went about our business the Gilpin County Court House quietly and stoically celebrated its 116th birthday with no cake and no pomp. It was just another Monday at the old courthouse in Central City as residents of Black Hawk, Central City, and other county residents stopped in to renew a license plate, research a mining claim, occasionally cast a vote or take care of various business as a part of their Monday morning routine. The Gilpin County Court was, and has been for the past 116 years, a building for the community, in service to the community and it is one of the only buildings in Gilpin County that has seen continuous use since its dedication ceremony on February 22nd 1900, one hundred and sixteen years ago this past Monday.

In the thirty-nine years since the founding of Gilpin County in 1861, the population of Gilpin soared from its early mining camp days to a population of almost 6,900 residents by 1900. The mining industry was in full swing with a gainfully employed citizenry that if not working in the mining industry, were working for a business that facilitates that industry. No matter what type of business you were in, whether it be mining or retail, masonry or carpentry, if you wanted to purchase land to stake your claim, or build a house, or you met that special someone and wanted to get married, then all of those transactions had to be conducted at one of the various departments in the old courthouse. Since the early days of Gilpin, the county and all its departments, the sheriff, the county court, the clerk & recorder, etc. astonishingly operated out of small Washington Hall, now the Art Gallery, from 1868 until the new courthouse was dedicated in 1900. The need for the courthouse was fairly unanimous among county leadership and you can be certain that the county employees at that time must have been more than thrilled to move out of the old cramped, clapboard Washington Hall into the brand new courthouse. The quality of workmanship on the inside and outside of the courthouse is still impressive today, so one can only imagine how beautiful a building it was when it was first completed 116 years ago. As it is now, and as it was then, you cannot live in Gilpin County for any amount of time and not pay a visit to the old courthouse. It still stands, as it was intended, to be a building of service for the community and it also serves as a reminder of the prominence, the endurance and longevity of Gilpin County.

The land that the courthouse sits on was purchased by Gilpin County from the most prominent and undoubtedly the county’s most famous citizen, Henry M. Teller. Upon Mr. Teller’s arrival in Central City in 1861, he quickly established a law practice as well as establishing a residence where the courthouse now stands. In 1862 Mr. Teller built an office for his practice, which stands next to Washington Hall and now serves as the Central City Opera’s ticket booth. As a lawyer, Mr. Teller was involved in city, county, and at that time Colorado Territory activities. His story is well documented and is a story of success – so much so that in 1872, eleven years after his arrival, he would organize, finance and build the Teller House. He also served as a Major General of Colorado Militia from 1863 to 1865. Then following Colorado’s admission to the Union in 1876, Teller was elected by the state legislature to be senator. He served a brief three-month term, and was then elected for his first full six-year term, going on to be re-elected three more times and representing Colorado in the Senate for over 25 years. By 1899, when the idea of a new courthouse was being proposed, Mr. Teller, now Senator Teller was long gone from the daily life in Central City and likely was a visitor to Gilpin and his old home.

An article written in the Feb. 15th, 1900 edition of the Gilpin Observer captures some great details.

Gilpin County now has one of the finest and most complete courthouses that can be found anywhere for its size. It is well built, handsome and large enough to accommodate all the officials of the county. It is a building of all citizens of the county may well feel proud, and is just what was needed for years. A person does not have to run all over the city to attend his county business.

Credit is due to the county commissioners who had charge of the contracts, the board consisting of J.J. Clark and Ed C. Harris, and to Mr. Owen is due special credit, as he devoted almost his entire time for nearly a year to see that it was put up in the best possible manner as the least cost, and his time and labor has not cost the county a cent.

Some two years ago the then board of County Commissioners, after having had the people of the county vote on the proposition of issuing bonds for the erection of a new courthouse, and having received the endorsement of the taxpayers, purchased the lots on Eureka Street on which the residence of H. M. Teller was situated, and, after grading them, erected a large retaining wall in the rear. Owing to some difficulty in regards to the funds work was stopped. Last year the new commissioners, after considerable trouble, were able to go ahead with the building, and about the first of June awarded a contract to Lamont & Ballard, who agreed to have it finished by January 1, 1900, but, owing to delay is securing building material, did not complete their contract until last week.

The building has foundation walls from three to four feet thick, and in places are twenty-six feet in depth. The basement is of Fort Collins stone, the walls of which are two feet thick. The remaining two stories are of the best rounded Golden pressed brick. The lumber used throughput is Texas pine, finished in oil. There are three ventilating flues and one smoke flue, each being 17×21 in the clear. The doors are eight feet three feet wide and one and three fourths inches thick. There is a transom over each door. The contract price of the structure, with the metal roof, was $23,300, which does not include the plumbing, heating, jail, vault doors, or lighting.

A good system of sewage been put in and connection made to Eureka Gulch. The sewerage and placing of water pipes and the toilets cost $750. The electrical wiring was done by the Gilpin County Light, Heat & Power Company, and cost $200. The chandeliers were secured by Mr. C E. Jenkins at remarkably low price of $265, making a total electrical cost of $465. The vault doors were purchased direct from the National Safe & Lock Company of Cleveland, Ohio at a cost of $105 each, or $639 for the six. They weigh 1,305 pounds each. –Gilpin County Observer, Feb.15th 1900

All in all, the total cost to build and furnish the courthouse came in at around $32,000, an astonishingly low price in comparison to what it would cost today! Thirty two thousand dollars in 1900 would roughly be worth $915,000 in 2015 dollars, and even that number seems incredibly low if one were to take on building the courthouse today. So the next time you’re out and about and find yourself at the old courthouse renewing your plates or casting your vote, remember to take a moment to look around, give a birthday nod, and admire the craftsmanship the architectural gem that is the Gilpin County Courthouse.

Photo 1: This view looking Northeast over Eureka Street in Central City shows the Teller Family Home marked with an X. The conversations that took place in this modest two story home through the years can only be imagined.  Credit: Denver Public Library Western History Dept.

Photo 2: This photo taken by local photographer H.H. Lake in the summer of 1899 shows the courthouse about two thirds of the way under construction. On the 3rd floor, the tops of two sixteen foot square corner towers are being constructed. The arched window casings are set and brick masons can be seen filling in the blanks between them. Credit: Denver Public Library Western History Dept.

Photo 3:  Another H.H. Lake photo taken the following summer of 1900 from almost the same spot, on Spruce Street behind the Opera House, shows the completed project. This view shows the original staircase that spanned the entire length of the landing under the three arches. In 1977 the stairs were reduced in width to accommodate a new entryway directly into the basement and jail. Credit: Denver Public Library Western History Dept.

Photo 4: These two rare lapel ribbons were produced by and worn by members of the “Gilpin County Pioneers Association” at the February 22nd, 1900 Courthouse dedication ceremony. Membership into the “Gilpin County Pioneers Association” was very simple; “All persons having arrived in Colorado prior to January 1, 1861, are eligible for membership on the payment of one dollar, after signing the roll of membership.” Credit: Eric Miller Collection

END_OF_DOCUMENT_TOKEN_TO_BE_REPLACED

Benefitting the county, schools, and much more By Don Ireland   This year marks the 30th anniversary of casinos opening in the former little mining towns of Black Hawk, Central City and Cripple Creek, Colorado. In those early years, smoking was allowed inside ... END_OF_DOCUMENT_TOKEN_TO_BE_REPLACED