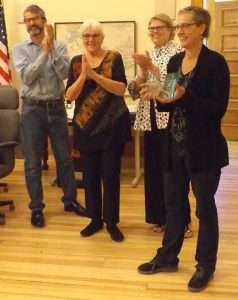 Recognition of CSU Extension Director Dr. Irene Shonle, the lifting of the stage one fire ban, and staffing shortages at the Sheriff’s Department were just a few of the highlights at the Gilpin Board of County Commissioners (BoCC) meeting on Tuesday September 24, 2019.

The Gilpin County Commissioners recognized Dr. Irene Shonle who is stepping down after 17 years of service as the CSU Extension Director for Gilpin County. Ms. Shonle was awarded a plaque that was presented by the Commissioners. All present wished Irene best wishes in a new chapter of her career.

Gilpin County resident Dan Adler commented that during Conversation with the Commissioners meeting it was discussed to curb the use of firearms within the County. Mr. Adler expressed his opposition towards such discussions especially on private property. He stated that, “You (the Commissioners) blame guns for gun violence – I blame lack of respect and a lack of discipline.” The BOCC listened intently as Mr. Adler sited facts that guns restrictions are not the answer to solve gun violence problem. It is education and discipline. “At the meeting last week one of you crossed the line. With your utter distaste and venomously spatting out the blame for gun violence on the NRA like it is some standalone monster.” Mr. Adler went on to explain that the NRA is an association of millions of American gun owners.” Adler also went on to comment on the disrespect of one of the commissioners towards President Trump by referring to him as “Trump.” Mr. Adler concluded that the only reason I have a first amendment right to criticize a public official is because of my second amendment right to bear arms. Madam Chair Isenhart thanked Mr. Adler and expressed an appreciation for his comments.

The Gilpin County Board of Adjustment unanimously approved BOA #19-04 as presented by Community Development Director Office Manager Tami Archer on behalf of applicant Ginger Deray. 19-04 is a variance request to allow a vault privy be installed on property located at 306 Harris Detour. The property which is bordered on the north and west by Alps Hill Road and Harris Detour is too small to accommodate a standard septic system due to setback requirements.

Gilpin County Community Development Director Stephen Strohminger presented a Boundary Line Elimination (BLE #18-02) on behalf of applicant Brandy Hale on Morning Star Circle. The applicant requested that boundary line be eliminated between Lot 117A and Lot 118 in the Mountain Meadows Subdivision to form Lot 117B which will consist of 2 acres of improved land. BLE #18-02 was unanimously approved by the Commissioners.

Gilpin County Community Development Director Stephen Strohminger presented the MOU between several Front Range Counties, CO Parks & Wildlife, and the National Forest Service. NoCo PLACES 2050 was formed out of the Northern Front Range Recreational Sports Shooting Partnership to manage impact on our outdoor resources due to current and expected population and tourism growth according to the Clear Creek Chatter. This work will include local recreation and natural resource stewardship plans at a county level, a regional recreation and natural resource stewardship plan that includes the Arapahoe and Roosevelt National Forest (ARNF), and a forest plan update for the ARNF. These plans will include strategies to share in the management, infrastructure development, and maintenance of public lands for better and more efficient stewardship of natural resources and public lands. Gilpin County Commissioners approved the MOU unanimously.

Ms. Lorenz also presented the Gilpin County Public Trustee Report for the second Quarter of 2019. $9,974 was carried over from March 2019, add to that $2,400 of income from the first quarter minus $1,059 in total disbursements for 2nd t Quarter/2019 total balance of $11,315. There were no questions from the Commissioners and the report was accepted.

Gilpin County Assessor Anne Schafer submitted a request to the Commissioners to change a part-time Office Assistant to a full-time position. According to Ms. Shafer, a full-time employee is required to coordinate and successfully complete the many tasks required of this position. The Assessor’s office has been busy processing with three main time-consuming tasks: the Timberline acquisition of the South district, assignment of Parcel numbers on Real Property accounts, and the assignment of Parcel numbers to over 500 mining claims. Gilpin County Commissioners made a motion to deny this request.

Gilpin County Sheriff Kevin Armstrong and Undersheriff Tonia Kapke presented a law enforcement pay proposal to solve the understaffing issue at the Sheriff’s Department. Gilpin County’s Sheriff’s Department is critically understaffed and is unable to attract and retain quality employees. The Detentions Division has not been fully staffed for the last ten years except for three months in mid-2014. In the proposal, the Sheriff’s Office request that the BOCC approve a market adjustment based on a hybrid step/years of service grid and update the compensation guidelines. This will allow for lateral hires for Detention Officer, Deputy, Corporal, Sargent, and Division Chief Positions. Gilpin County Commissioners made a motion to approve the pay proposal with a $5,000 cap per year on annual increases and another motion to update the Gilpin County Compensation Guidelines include an adjustment to the lateral starting pay effective October 2019.

Colorado Division of Fire Prevention and Control (DFPC) Battalion Chief Tony Simons, Gilpin County Emergency Manager Nathan Whittington, and Sheriff Kevin Armstrong presented a proposal to house DFPC assets in the county annex near the Justice Center. According to Sheriff Armstrong it is important to house a DFPC unit in the county and be engaged in the community to prevent and fight wildland fires. Commissioner Engels requested that a specific plan for going forward, what’s need to be done to the annex, and what costs will the County incur. The Commissioners agreed to table the request until a formal plan can be submitted for the October 8, 2019 regular meeting.

Gilpin County Clerk and Recorder Sahari McCormick and Chief Deputy Clerk Elaine Lewers presented the Clerk and Recorder’s monthly report for the month of August 2019. Nothing really stands out in the report according to Ms. Lewers, as most of the 2019-2018 variances are in the black. Ms. Lewers also stated that Colorado Department of Revenue division that oversees draws will release a financial project update Sunday and everybody in the financial department has been focused on creating and testing that project. With that in mind, they do not have any staff to devote to Gilpin County’s revenue issue. Ms. McCormick also reminded voters to check your voter status on www.govotecolorado.com to ensure all your information is correct and up-to-date.

County Manager Abel Montoya directed the Commissioners attention to the Human Resources (HR) Report. Currently there are 193 positions in the County with a vacancy of about five positions. Three of those positions are part-time and two are full-time with 16 volunteers that are not included in the HR report.

Gilpin County Commissioners approved the minutes from the August 20, 2019 and the September 3, 2019 regular meeting with no corrections or amendments.

The next Gilpin County Board of Commissioners meeting will be October 8, 2019, 9 a.m. at the Gilpin County Courthouse at 203 Eureka St. Central City, Colorado. For more information visit http://www.co.gilpin.co.us.

END_OF_DOCUMENT_TOKEN_TO_BE_REPLACED

Benefitting the county, schools, and much more By Don Ireland   This year marks the 30th anniversary of casinos opening in the former little mining towns of Black Hawk, Central City and Cripple Creek, Colorado. In those early years, smoking was allowed inside ... END_OF_DOCUMENT_TOKEN_TO_BE_REPLACED