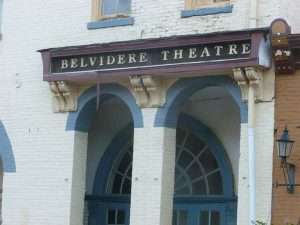 The Board of County Commissioners held their regular meeting at the Old Gilpin County Courthouse in Central City and convened at 9:02 am.

They started out the meeting by reviewing the Temporary Use Permit for Gilpin History aka Gilpin County Historical Society’s 27th Annual Cemetery Crawl. This event moves each year to a different cemetery in Gilpin County and will be held at Bald Mountain Cemetery this year. Bald Mountain will be undergoing restoration efforts this summer in time for the Crawl in August. The Commissioners passed the Temporary Use Permit application unanimously.

Next considered was Boundary Line Elimination Application #15-03, David J. & Vicki L. Nemec, Lots 12 & 13, Forest Hills Filing #2. The request is to eliminate the boundary line and hereby combine the two lots owned by the Nemecs. The application was unanimously approved by the Commissioners and lot will now be known as Forest Hills Mobile Home Estates Filing #2, Lot 12A to total 2.32 acres. The BLE program is considered by the County Board as a “vital part of our growth management strategy and is a major effort on the part of the County preserve Gilpin’s rural character and its fragile environment.” Since the BLE program started, 491 BLE’s have been approved resulting in a net reduction of 1,569 potential building sites.

At the beginning of the month, the County took possession of the old Belvidere Theatre property via a Treasurers Deed. An experienced consultant with Slaterpaull-Hord-Coplan-Macht has proposed to provide services to complete a thorough Historic Structure Assessment of the location. Their fee is not expected to exceed $15,000 and may be paid for with funds from the Colorado State Historical Fund. The grant application has almost been completed. Slaterpaul will help to complete and submit the grant application. They will provide an assessment that will provide a plan for repair and restoration. The City of Central has offered to pay the required matching funds of $3,750. Central City is actively working to establish a 501c3 organization for the rehabilitation of the Belvidere. The Commissioners approved the grant application and consulting proposal commenting, “It’s important to get some facts so we can determine what needs to be done.”

The Commissioners voted on and unanimously approved Resolution #15-08, Referring a ballot question to the qualified electors of the County of Gilpin at the November 3, 2015 Odd Year election, to modify the term limits imposed upon the Board of County Commissioners by Article XVIII Section 11 of the Colorado Constitution to establish a limit of three terms. Commissioner Linda Isenhart noted, “We are asking the voters to make a choice. If someone is qualified and wants to run for a third term, ultimately it’s up to the voters.” Commissioner Gail Watson commented that she initially had some reservation about this, but she takes back her concerns since the voters will ultimately make a decision.

Public Health Office Busy and Gilpin Connect Back on Track

County Manager Roger Baker reported that the Public Health office has been very busy with various items in May. The water lab tested 17 samples, with six positive for coliform and two positive for E.Coli. Research and planning for a health fair in Gilpin County has been in the works. There have been 22 routine inspection and one plan review and pre-opening inspection for the Saratoga Casino’s Mill City Chophouse. Two food borne illness complaint investigations have been held and attendees have been participating in the Wellness Now Taming the Anxious Mind classes. Manager Baker reported that the Gilpin Connect ride service is up and running, based out of the Public Health building. Materials have been printed and will be mailed to residents to expand awareness of the available service. The new driver has been trying to accommodate people and the County asks that people are flexible and accommodating as well.

Judge Ruled in Favor of County in Recent Lawsuit

County Attorney Jim Petrock reported that on Monday there was a ruling in the case against the County brought on by Karla Fuller, resident of Central City. The judge determined that the claim against the county should be dismissed with prejudice as the tree removed by Gilpin County was considered as being owned by them. Search of the minutes from previous meetings indicate that Fuller brought forward legal action against the County back in 2011 as well. The most recent case went to trial and the County did not feel a settlement offer was appropriate since the Plaintiff had no case.

Commissioners approved the Meeting Minutes from May 19th and also reviewed their schedule of meetings to be held or that they are planning to attend in the next couple weeks. Coffee with the Commissioners will be held on June 25th at the Community Center. Commissioner Watson noted that she would like Bill 152 to be put on the ballot. She said, “A number of counties are taking this to their voters.” In 2005, Colorado Senate Bill 152 placed a significant roadblock for any local government efforts to invest in broadband deployment.

Gilpin County Fair Coordinator Vicki Nemec brought forward her application for a Special Event Liquor Permit at the Gilpin County Fair this year. She told the Commissioners that Mardi Gras Casino with Affinity Gaming Group will be running the alcohol sales booth since no one else came forward. The County receives 10% of all alcohol sales and estimates total revenue at about $2,000. Nemec commented, “Five years ago we used to sell three to four thousand dollars a day when people came to the fair from Denver. We’ve had to cut down what we’re doing now and are getting just enough funding to hold the fair.” She is focusing on Saturday events mostly since Sunday will be a Safety Fair. There was no public comment during the public hearing. The Special Event Liquor Permit was approved unanimously.

The Board went into executive session at 9:37 am to discuss the lease of real property per CRS 24-6-404(4)(a). The executive session was concluded and the regular meeting was adjourned at 10:15 am. After the meeting, county staff and Commissioners invited public attendees to walk through the Belvidere Theatre to view the current state of the building.

END_OF_DOCUMENT_TOKEN_TO_BE_REPLACED

Where the dead get to tell their story By Jaclyn Schrock On Saturday, August 21, the Gilpin Historical Society held their annual Cemetery Crawl. Tickets allowed the shuttle of hundreds of guests from the Teller House parking lot to the Cemetery. Depending on v... END_OF_DOCUMENT_TOKEN_TO_BE_REPLACED

Benefitting the county, schools, and much more By Don Ireland   This year marks the 30th anniversary of casinos opening in the former little mining towns of Black Hawk, Central City and Cripple Creek, Colorado. In those early years, smoking was allowed inside ... END_OF_DOCUMENT_TOKEN_TO_BE_REPLACED