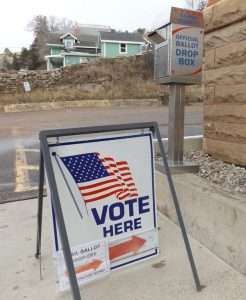 The Gilpin County Board of County Commissioners met on Tuesday, November 6, 2018 at the historic Gilpin County Courthouse.Present were Commissioner Chair Ron Engels with Commissioners Linda Isenhart and Gail Watson. Also present County Manager Abel Montoya, County Attorney Brad Benning, and Deputy Clerk to the Board Sharon Cate. After a brief delay, the regular meeting kicked off at 9:18 am. Following the Call to Order, there was a brief moment of silence for County Manager Abel Montoya’s stepfather, Walter Martinez.

The Nederland Mountain-Ear reporter, John Scarffe, announced that long-time Nederland community reporter Barbara Lawlor recently passed after a long illness. She was well-known in the Boulder and Gilpin county area and will be missed. Services are still pending at press time.

First up, Gilpin County Community Development Director Stephan Strohminger presented an updated revision of the 1999 Growth Inter-governmental Agreement (IGA) between Gilpin County and the cities of Black Hawk and Central City. The revised version addresses Black Hawk releasing some portions that were previously in their area of the IGA to Gilpin County and Central City. Central City continues to grant Black Hawk easement from Miner’s Mesa to Lake Gulch, but prohibits improvements of the access road. Black Hawk is working on an agreement to allow Central City access to CO Hwy 119 if needed for development as long as Black Hawk’s plans for CO Hwy 119 are not impeded by Central City. Lastly, Black Hawk is providing a GIS Layer in order to show their pipeline easement on the IGA boundary map. Gilpin County Commissioners requested more information and time to become familiar the particulars of the updated version. Thus the final vote is postponed until after a November 14th IGA meeting.

County Planner Danial Horn presented BLA 18-04 on behalf of applicants Donald Miller, Amy Mowry, and Robert Adams. The owners of 824 Mountain Meadows Drive built a 256 square foot garage on the northeast corner of their property without a permit. The garage sits a little more than 24 feet from the west property line which borders US Forest Service land. By approving this BLA, the garage would be situated 31 feet 6 inches from the north property line bringing the location of the garage back into compliance. All the After-The-Fact fees have been paid and an After-The-Fact Building permit will issued upon approval. Gilpin County Commissioners approved BLA 18-04 unanimously.

Gilpin County Public Trustee Alynn Huffman presented the Public Trustee’s Third Quarter Report to the Gilpin County Commissioners. $318,570 was carried over from June 2018; add to that $2,390 of income from the third quarter, minus $308,225 in total disbursements for 3rd Quarter/2018, and that leaves a total balance of $12,736. There were no questions from the Commissioners and the report was accepted.

Gilpin County Finance Director Clorinda Smith presented a request for a county-wide increase in the limit on the County’s credit cards. The current county-wide limit has not been increased since 2006. Current limits only allow cardholders to make small payments, and larger limits are needed for appropriate normal business purchases. Current limits do not allow for flexibility in an emergency. Smith requested that the Commissioners approve a county-wide limit increase by $44,000 to $100,000 total limit. This will not have a financial impact and there should not be an increase in county spending. Gilpin County Commissioners approved the increase unanimously.

County Attorney Brad Benning reported that there was another zoning violation reported in the Russell Gulch area. A party was reported to be squatting on Red Tail XP property. A trailer previously moved from the Dirk Larsen property has been removed from the Red Tail XP property and the party was arrested. There are still some additional violations in which the owner of the property has been served and proceedings are expected to move forward. Benning stated the homeowners in the Russell Gulch are becoming more vigilant in reporting zoning violations.

County Manager Abel Montoya reported that the County released a Request for Proposal (RFP) for a facilitated 2019 County Summit and Strategic plan. Companies interesting in submitting proposal have a deadline of November 13th with the selection process being conducted through to December and the proposal will be presented to the Commissioners on December 4th for a summit to be held sometime in February or March in 2019.

Gilpin County Commissioners approved the meeting minutes from October 23, 2018 with some grammatical and spelling changes. Chairman Engels abstained from voting due to his absence.

Gilpin County Commissioners recessed into Executive Session for the purpose of determining positions relative to matters that may be subject to negotiations, and/or instructing negotiators under CRS 24-6-402(4)(e).

END_OF_DOCUMENT_TOKEN_TO_BE_REPLACED

Benefitting the county, schools, and much more By Don Ireland   This year marks the 30th anniversary of casinos opening in the former little mining towns of Black Hawk, Central City and Cripple Creek, Colorado. In those early years, smoking was allowed inside ... END_OF_DOCUMENT_TOKEN_TO_BE_REPLACED

Where the dead get to tell their story By Jaclyn Schrock On Saturday, August 21, the Gilpin Historical Society held their annual Cemetery Crawl. Tickets allowed the shuttle of hundreds of guests from the Teller House parking lot to the Cemetery. Depending on v... END_OF_DOCUMENT_TOKEN_TO_BE_REPLACED