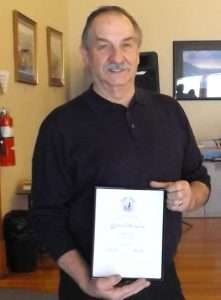 A Certificate of Appreciation was presented by the Gilpin County Commissioners to Rick Winfrey, for Exemplary Service as the Veterans Service Officer. Winfrey was appointed to his current position as Veterans Service Officer on April 2015. An individual that Winfrey had assisted recently submitted a thank you letter to the Commissioners stating that he went above and beyond what needed to be accomplished to assist her and she wanted to express her gratitude. Congratulations Rick on a job well done!

Nederland High school After-Prom Funding request was considered and discussed during the meeting. The request was for $1,000 granted from Gilpin County to fund after prom activities. About 50% of the prom attendees are from Gilpin County that is held in Boulder County. It was unknown at the time of the Commissioners meeting if Boulder County had contributed any funds towards the event. Commissioner Gail Watson made a motion to pass the request. Buddy Schmalz seconded the motion, and the grant was awarded.

A grant agreement was submitted by Caring for Colorado Foundation naming Gilpin County as the Grant recipient for the Gilpin Connect Project. The total grant awarded is one-time payment of $22,701. The term of the grant is one year, from March 1, 2016 to February 28 2017.

The conditions of this agreement are that Gilpin County must maintain a non-profit tax status through-out the term of the grant. And in addition Caring for Colorado Foundation must be assured the grant will be expended for an educational, scientific, or other charitable purpose that will support achieving improvements in the health of Colorado citizens.

Motion to approve was made by Buddy Schmalz, and seconded by Gail Watson. Agreement was approved

An intergovernmental agreement between the Boards of County Commissioners of Clear Creek, Gilpin, and Summit Counties was approved by the Gilpin County Commissioners. The agreement, which appoints Summit County as the lead administrator for the Multi-County Service Area (MCSA)for the Community Services Block Grant (CSBG) program serving the residents of Clear Creek, Gilpin, and Summit counties. As lead administrator, Summit County will receive and account for the CSBG funds on behalf of all three counties and administrator of the CSBG Tripartite Board.

Uniform applications for CSBG services will be received from Clear Creek and Gilpin counties through Loaves and Fishes food bank on a first come first serve basis and processed for determination through Summit County.

Local marijuana merchants, Joe and Jason Licata, requested the Gilpin County Commissioners review their proposal of a Marijuana Retail Grow Facility located 5312 Colorado Highway 119, which is the former Coyote Motel. The proposal is to build a steel building 1,500 square feet in size and use it for growing marijuana for retail sales. Licata assured the Board that there will be no traffic impacts, water will be trucked in from an undisclosed location, and that security will be maintained throughout the life of the grow operation.

Community Development Director, Tony Petersen, requested the Board to approve a land swap between Gilpin County and Bonanza Land LLC.

Bonanza Land LLC agreed to trade the La Place mining claim for the purpose of a shooting range in return for the interests of four land parcels equal to 12.13 acres.

The La Place claim offers great potential as a shooting range site. It is somewhat isolated, it is easily accessible from the Central City Parkway and it can be procured without cash. The County’s interest in their four land parcels is nominal at best. Gilpin County has undivided interest in two of the claims, and a third has a small lot with a house excluded from our holdings. The forth claim is located in Central City.

The Board of Commissioners adjourned to Executive session to discuss the land swap.