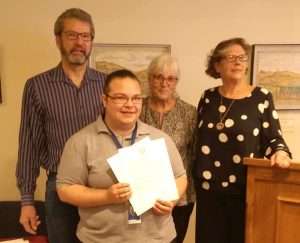 The Gilpin County Commissioners meeting on Tuesday, April 10 began at 9 am in the borrowed court room for Central City while the Courthouse at 203 Eureka Street nears remodeling completion. Present in the meeting were District #1 Commissioner Ron Engels, Board Chair, District #2 Commissioner Linda Isenhart , District #3 Commissioner Gail Watson, Deputy Clerk, Sharon Cate, County Manager Leslie Klusmire and County Attorney Bradford Benning. Elected County officials and other staff members were in the chambers prepared to presented information to the Board.

The meeting was called to order with one executive session item to receive legal counsel on Marijuana Cultivation and Licensing process was added to the original agenda.

Chief Deputy Mary Lorenz said that the March 2018 report indicates that the current property taxes collected this year are 31.78% will last year at the same time was 31.44%, so normal progress. These property taxes may be due by the end of April for one time payments or if two payments are made, then finally by the end of June 2018 for the tax year 2017. There have been only three foreclosures so far this year while electronic fund releases are the same as last year.

The Quarterly Report validating all funds collected and disbursed through the office of the Gilpin County Public Trustee includes amounts from January through March 2018. These reports prepared by Treasurer, Alynn K, Huffman regularly so that once the Commissioners accept the report, fees and interest collected can be disbursed to the appropriate departments and appropriately listed funds moved to the Operating Account for accounting services. The Commissions accepted this report.

Representing Jefferson Center, which covers the mental health wellness of 33,000 people, was Amy Lyden. Lyden serves Jefferson Center in Gilpin and Clear Creek Counties. She is a peer specialist who partners with those who have overcome the stigmas which cause many not to seek help. She is continuing in her own stabilizing of mental health wellness, as she serves others in through Jefferson Center which originated in Jefferson County is located at 4851 Independence in Wheat Ridge. This week the Crisis and Recovery Center is moving to 4643 Wadsworth Blvd. in Wheat Ridge. Gratitude is recognized to Colorado Crisis, which is one agency that helps relieve extra care needs. Lyden can be found at health centers in Gilpin and Clear Creek Counties.

May 2018 is Mental Health Month. Our Commissioners also signed a Proclamation supporting the essentials of mental health being the foundation of overall health and emotional wellbeing for all ages to promote a healthy community. The statements encourage recognizing and so preventing the wide spread influences resulting from mental health conditions and substance use disorders. Seeking efforts to break down the barriers that restrict many from seeking to overcome what can seem to restrain their potential and effectiveness is the goal of the Mental Health Month Proclamation.

Gilpin County Commissioners signed both Proclamations after reading each of the statements in the meeting.

Gilpin County Sheriff and Fire Marshal Bruce Hartman presented Emergency Manager Sargent Kevin Armstrong’s Revised 2018 Annual Operations Plan (AOP). AOP focuses on wildfire management and funding. Commissioners approval of each County’s AOP is required by April 15, 2018. The annually renewable plan has clarifying word changes only in specific sections from our AOP 2017 plan. The major difference is that areas in Southern Gilpin County referred to as “no-man’s land” which had not been given fire protection previously has now been added to Timberline Fire District with actions taken last year by the Commissioners. Another change included additional outlining for incident strategies of unplanned fires. Interagency agreements are included with county, state and Federal authorities. Communication agencies and protocol are clearly maintained. The revision plan for 2018 is still 32 pages and is said to have no additional budget needs.

With appreciations noted by the Commissioners for the many hours or effort to maintain this agreement, the 2018 AOP was approved and signed.

The Commissioners now reset their purpose as the Board of Adjustment officially at 9:23 to hear public comments for three Gilpin County variance requests.

BOA #18-02, BOA #18-03 and BOA #18-04 were presented by Community Development Director Stephen Strohminger. Each variance to the current requirements of Gilpin Counties Zoning Code was explained with hardship conditions supporting the request. The three separate property owners had intentions of building either garages or rebuilding an existing deck that would cause a structure to be within the 30 foot easement to their property line. Two original structures were built in the 60s before the current code was established. Each of the garages needed to be situated on their property to allow driveway access nearer the property lines than previously accepted. Evaluating each of the situations with diagrams, questions, and confirming the neighbors have been notified and accepting of the request, all three variances were approved.

BLA #18-02 and BLA #18-03 were presented by County Planner Daniel Horn. Both applications were made by Bonanza Land LLC on land containing mining claims in Russell Gulch on Alps Hill Road. The purpose of the adjustments was to facilitate future development of the properties which could bring no change to the existing mining claims. These seven parcels all were approved for boundary line adjustments.

Colorado Work Program is the statewide plan from the Office of Economic Security, Division of Employment and Benefits. This Gilpin County plan recognizes our particular interests and needs. Our County plan had previously been adjusted by Human Services Director Betty Donovan. It was not then expected to have been signed by the Commissions. With Ms. Donovan’s retirement last year, the 2017 plan was recreated and signed by the Interim Director Karen Erdmin. The 2018 plan has been again amended to better meet our resident’s needs, and to be absolutely in agreement with State requirements, will be signed by the Commissioners. This plan is primarily responsible for providing assistance to residents in need. Food Stamps are the main distribution this program provides. Most counties require employment to be obtained in the first 30 days of receiving Food Stamps. This is an unrealistic expectation for our county and has been removed from the plan. Other ways of providing assistance for those in need rather than a monthly cash assistance plan has been altered to recognize families with one time basis needs that can assist or facilitate individuals get back to work, such as paying for their gaming license. The plan presented by Interim Human Services Director Case Manager Supervisor Karen Erdmin and Human Services Director Sherrin Ashcraft was approved and later signed.

Approval of Reilly Johnson Architecture, Inc. (RJA) Contract for Justice Center Needs Analysis and Options Study, is a relief for the Commissioners. The structural challenges of Gilpin’s jail has been a top priority for the facility that has also been challenged by over population. Getting bids to address the challenges was a drawn out affair as many companies were unwilling to take on their project. The Commissioners are grateful this company is very cost-conscious and has offered a contract not to exceed $105,575 with amounts below their initial speculations. The hot water circulation system is the primary target for improvement. Also reviewed will be interior and exterior walls, beam, trusses and floor problems that may exist. Specified also is a review of existing flat and high-pitched roofs that may need repairs. Every detail has not been agreed upon by each of the lawyers, but ironing out these wrinkles appears to be quickly resolved. The project is expected to begin this Thursday April 12, 2018.

Parking leases with Central City Opera House Association were quickly renewed for the year. One lease for the Old Court House parking lot (available outside of normal business hours) and the other for Teller House lot makes a good use of space when one entity is not using their closest parking areas.

A legal report was made by Bradford Benning, County Attorney with Jim Petrock’s Law Firm. Benning is the one who specializes in Gilpin’s legalities of water. A few years back 4” of water feed had been purchased from the Church Ditch which goes to Golden. Gilpin is close to needing that water, but not quite yet. Benning reported that the water can now be negotiated to be leased to a farmer.

Commissioners reviewed upcoming public meetings. These can all be found at www.co.gilpin.co.us. Discussing topics to be scheduled was included in this time. The agenda suggested comments about Gross Reservoir Project would be heard at the end of the meeting, although none were offered.

The County report was provided by County Manager Leslie Klusmire. Departments providing reports included Cooperative Extension, Sheriff’s Office, and Public Works. Part of the Cooperative Extension report gave plans made possible by some grant funding to convert the current plots to raised beds in the community garden to help keep critters from eating the harvest and to make gardening more opportunistic for seniors who are challenged to get down and up from the ground. Commissioner Watson was suggesting that the land where the gardens have been be considered future Senior housing, so the garden improvements may be temporary. Each of the 45 County projects were given 27 levels of priority. There are four in the number one position, three in #2, and eight in the #4 position. Some plans have been removed from the priority list having found some sort of resolution or decreasing of need. Less than 15 items are either ongoing or nearing completion.

2018 Work Program is what the Commissioners are using to implement optimal team effort and effectiveness regarding individual abilities and interests matching with current projects.

Courthouse renovations teams have moved the last displaced group of offices back to improved work spaces so the large meeting room is the last to have its floor completed.

Department Director Positions are filled. Welcoming to our Parks and Recreation Director position is Kyle Benedict who comes from Denver, where he had been managing Washington Park Community Center and pool. His family is thrilled to spend the summer in Gilpin County. Appreciation for a job well done was expressed to Alan Smith who took over the Interim position of Parks and Recreation Director.

Human Services Director Sherrin Ashcraft is welcomed from Jefferson County Human Services. She is familiar with the Gilpin staff and excited to be working here.

Appreciation was expressed to interim Human Services Director Karen Erdman. County Manager Klusmire stated, “Gilpin County will forever be grateful for her work to address needed changes and institute many improvements. She made a difference that will last a long time.” Interim casework manager Monika Evanson has done a great job while Karen was interim director.

Wildfire Response Planning Group, Anchor Point who presented to the board last month, has a three year work plan contract signed to work fire mitigation in the highest risk areas.

A recess at was taken at 11:25 am to meet in Executive Session. Three items needed legal advice, one was a personnel matter, and one was a discussion of the Church Ditch water lease.

The next Commissioners meeting is at 9 am on Tuesday, April 24, at Central City Hall, 141 Nevada Street.

END_OF_DOCUMENT_TOKEN_TO_BE_REPLACED

Where the dead get to tell their story By Jaclyn Schrock On Saturday, August 21, the Gilpin Historical Society held their annual Cemetery Crawl. Tickets allowed the shuttle of hundreds of guests from the Teller House parking lot to the Cemetery. Depending on v... END_OF_DOCUMENT_TOKEN_TO_BE_REPLACED

Benefitting the county, schools, and much more By Don Ireland   This year marks the 30th anniversary of casinos opening in the former little mining towns of Black Hawk, Central City and Cripple Creek, Colorado. In those early years, smoking was allowed inside ... END_OF_DOCUMENT_TOKEN_TO_BE_REPLACED