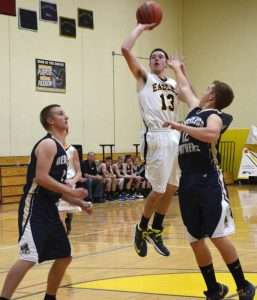 By virtue of a 55-40 win, the Gilpin men’s team came home with third place in the Lake County basketball tournament last weekend. The win gave the Eagles a temporary 2-1 record, but that was evened up by a later loss to Lake County. The Eagles also lost to tournament champion Monte Vista.

Crested Butte could not handle the Eagles’ vaunted press defense and fell behind 23-5 in the first quarter. That was, in essence, the story of the game, as the Titans outscored the Eagles 35-32 the rest of the way. The Eagles’ terrific twosome, Chase Boulter and Matt Immordino, led the scorers with 26 and 18 points respectively. Boulter also led the team in rebounds with 8, and sophomore Nick Peterson tallied 5. The Eagles had 13 steals but also committed 16 turnovers that caused the game to be closer than the score indicated.

After their crushing victory over Nederland, the Eagles were treated to a dose of reality by class 3-A Monte Vista. The taller and faster Pirates stomped Gilpin 71-31 in the tournament opener for both teams. Again, the first quarter proved significant as Gilpin fell behind 15-3 when Monte Vista’s guards proved too fast to be contained by the press. Gilpin warmed up a little in the second period, but they trailed 38-13 at half time and could never catch up. The Eagles were not helped by Monte Vista’s 50% scoring from the field. Boulter and Immordino had 10 points each to lead the scoring for the Eagles, and Boulter also led the team with 8 rebounds.

The Lake County jinx persisted in the Eagles’ final game. Gilpin has never won over Lake County in the latter’s tournament, and the Panthers took care of business again by outscoring the Eagles 62-46. The game was much closer than the score indicates, as Gilpin trailed by only five points at the end of the third quarter. Lake County finally solved Gilpin’s press in the fourth quarter and overran the Eagles 22-11 to account for the final difference. Boulter scored 22 and Immordino sank 12 to become the only Eagles scoring in double figures. Boulter again led the rebounders with 12 and Peterson grabbed 9. This loss squared the Eagles’ record at 2-2 for the season.

Gilpin will play its next game vs. West Grand at Kremmling on Saturday, December 13, at 4:00 p.m.

END_OF_DOCUMENT_TOKEN_TO_BE_REPLACED

Benefitting the county, schools, and much more By Don Ireland   This year marks the 30th anniversary of casinos opening in the former little mining towns of Black Hawk, Central City and Cripple Creek, Colorado. In those early years, smoking was allowed inside ... END_OF_DOCUMENT_TOKEN_TO_BE_REPLACED