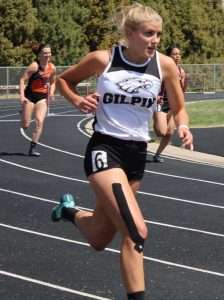 It was a beautiful day in Berthoud on Saturday, April 15 for the non-conference Max Marr Spartan Classic Meet. Gilpin High School’s track athletes did a great job of competing, according to Coach Craig Ball. This meet was one of the largest that they have participated in, with a total of 22 schools.

Ball reported on the highlights.

The boys 4×400 team, made up of Braedyn Perez, Josh Trujillo, Austin Boulter, and Jack

Ball, has been working in the weight room and on the field to make a push for the state meet in May. The boys broke the school record and won their heat on Saturday with a 4:01.22, eclipsing the record set last year at 4:02.46.

“Nicole Adams had a new personal best in the high jump with a jump of 4’5″and finished tied for 12th for the meet,” Ball noted. “Our girls’ medley team of Ashley Parkhurst, Keely Schmidt, Nicole Adams, and Lena Warren placed tenth with a time of 2:10.51. They are closing in on the school record that has been held since 2001 (2:08.09) by Jessica Cole, Dana Salerno, Sara Keehfus, and Dusty Thompson.”

Ball advised that the girls’ team is working to put together a 4×800 race in the upcoming meets and have been putting in the work to lower their times each week.

RML shocked the Eagles by getting 6 runs in the first inning, while Gilpin only managed 1 run. The teams held each other scoreless in the second inning. The Eagles worked to catch up in the third inning and reaped 3 runs. The seventh inning saw Gilpin fans on their feet cheering the team on to 8 runs and the win.

Will Lorenz was selected as Player of the Game. “Will did an outstanding job pitching 6 strikeouts. He had 6 stolen bases and hit a single with 2 runs scored. Nice job, Will!” noted Coach Tony Lorenz.

Gilpin’s runs are broken down as follows: Eryk Lorenz (3), Manny Gomez, Sam Snyder, Cooper Lindberg, Will Lorenz, and Braedyn Perez (2 each), and Angel Gomez and Chad Holmes (1 each).

Top hitters were E. Lorenz, Snyder, and Lindberg with 2 each. E. Lorenz got 2 doubles and Perez followed with 1. Lindberg garnered a triple.

The Eagles had 12 total stolen bases, compared to RML’s 5.

Perez was first in put-outs with 10.

In other action on the diamond, the Eagles lost to the Lyons Lions 23-1 on April 11 in an away conference clash. The Lyons team boasts a 12-1 record, 7-0 in league play. Gilpin’s young team had their hands full against Lyons’ team of mostly juniors. Brekken Billman came in with the lone run for the Eagles.

Gilpin was defeated again on April 17 when they faced the Dawson School Mustangs of Lafayette. The final score was 22-2 in that away conference competition.

END_OF_DOCUMENT_TOKEN_TO_BE_REPLACED

Where the dead get to tell their story By Jaclyn Schrock On Saturday, August 21, the Gilpin Historical Society held their annual Cemetery Crawl. Tickets allowed the shuttle of hundreds of guests from the Teller House parking lot to the Cemetery. Depending on v... END_OF_DOCUMENT_TOKEN_TO_BE_REPLACED