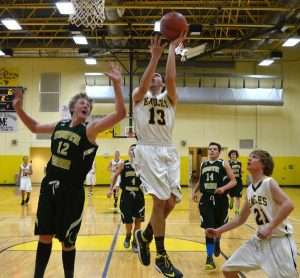 One of the strangest basketball games in recent Gilpin County history resulted in a 53-48 win for the Eagles at their home gym Saturday. South Park scored only 7 points on 17 attempts from the field in the entire first half for an 18% shooting percentage, yet trailed only 16-15 at half time. Gilpin suffered from foul trouble and lost three starters on fouls during the game while allowing Burros players to score 20 points on free throws.

The Eagles, on the other hand, shot an excellent 45% from the field, including two 3-pointers by Bjorn Tomlinson in the third quarter and an additional 3-pointer by Tanner Davis in the fourth quarter. Tomlinson’s points came at the end of the period, allowing the Eagles to go into the final quarter tied at 34-34. Davis’s basket sealed the victory in the final period. As for scorers, only Matt Immordino scored in double figures for Gilpin. He totaled 25 points for the game, mostly on fast break layups, and actually put Gilpin ahead 8-0 at the beginning of the game.

Gilpin’s 1-3-1 zone forced South Park to take poor shots, and the Burros were cold from the field in the first half. Tough rebounding by both teams resulted in numerous fouls and got Eagles’ forward Nick Peterson in early foul trouble with 4 in the first half. Peterson is the Eagles’ second leading rebounder, so his absence gave South Park a slight advantage on the board. Ultimately, all three big men – Peterson, Tomlinson and Chase Boulter – fouled out, but the job they did on the boards kept the Eagles in the game. Meanwhile, Immordino continued to drive the baseline and score at will, scoring on ten of twelve 2-point attempts. Tanner Davis, Eryk Lorenz, and John Salley added 9 points collectively in substitute roles in the fourth quarter and were instrumental in providing the final 5 points that spelled the victory.

While the Eagles’ shooting percentage was remarkable, the statistic that probably determined the outcome of the game was turnovers. The Eagles’ defense caused 27 turnovers for the South Park offense while surrendering only 12 themselves. The game statistics show an even balance otherwise, with Gilpin winning in shot percentage and steals and South Park winning in free throw percentage and rebounds. The win brought Gilpin’s home record to 4-0 and overall record to 5-3. Monday’s game against Denver Jewish Day was not yet reported to Maxpreps by press time. The story will run in next week’s edition. The Eagles’ next game is away against Clear Creek on January 21.

END_OF_DOCUMENT_TOKEN_TO_BE_REPLACED

Benefitting the county, schools, and much more By Don Ireland   This year marks the 30th anniversary of casinos opening in the former little mining towns of Black Hawk, Central City and Cripple Creek, Colorado. In those early years, smoking was allowed inside ... END_OF_DOCUMENT_TOKEN_TO_BE_REPLACED

Benefitting the county, schools, and much more By Don Ireland   This year marks the 30th anniversary of casinos opening in the former little mining towns of Black Hawk, Central City and Cripple Creek, Colorado. In those early years, smoking was allowed inside ... END_OF_DOCUMENT_TOKEN_TO_BE_REPLACED