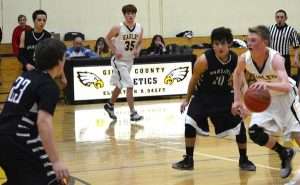 Season had its ups and downs

The Gilpin boys’ basketball team hustled hard, but fell just short of their goals in their last two games of the season. The Eagles took league champion Denver Waldorf to overtime last Monday, but tired in the extra period and bowed 59-49. Then last Thursday Chase Boulter canned 30 points for Gilpin, but it was all in vain as Cornerstone Christian was too big and too experienced and took the game 67-52. The losses left Gilpin’s final season record at 7-13.

The Eagles’ 1-3-1 full-court press haunted Denver Waldorf, who jumped off to a 21-12 halftime lead and then increased the distance to 12 points in the third period. Then ghosts of the five previous wins over Waldorf began their work, and Gilpin closed the gap by winning the second half. In fact, the Eagles had a chance to win the game outright with 10 seconds left, but Boulter’s jump shot fell short, and overtime was needed.  The hustling Eagles then fell into exhaustion and Waldorf won the game going away. Matt Immordino led the Eagles’ scorers with 15 points and Boulter had 14. The Eagles held a tight edge in rebounding, despite the height advantage of the Spartans. The loss left the Eagles at 0-8 for the 5280 League season.

When the Eagles last faced Cornerstone Christian, the Bulldogs’ Mike Durill scored 30 points and dominated the game. This time the Eagles were prepared for him and held him to 16 points, five below his season’s average. But point guard Robert Mulford ran wild with seven 3-pointers and a total of 33 points, overshadowing Boulter’s 30. Both Boulter and Mulford finished the game with an amazing 55% shooting percentage. The game was never in doubt after the Bulldogs jumped off to 34-21 half time lead, but the Eagles didn’t quit. They played Cornerstone almost even in the final two periods, scoring 31 to the Bulldogs’ 33. Boulter was the only Gilpin player to score in double figures.

While the season had its ups and downs, the Eagles showed a great improvement in their pressing skills and held their own in rebounding and shot percentage. This was a tough year because the 5280 League was extremely good for a 1-A league, and Gilpin lacked the stabilizing effect of senior leadership, whereas the other teams did not. The Eagles had no seniors on the team. Next year, the team should show more maturity and the bench will be deeper. We look forward to a great 2015-16 season.

END_OF_DOCUMENT_TOKEN_TO_BE_REPLACED

Where the dead get to tell their story By Jaclyn Schrock On Saturday, August 21, the Gilpin Historical Society held their annual Cemetery Crawl. Tickets allowed the shuttle of hundreds of guests from the Teller House parking lot to the Cemetery. Depending on v... END_OF_DOCUMENT_TOKEN_TO_BE_REPLACED