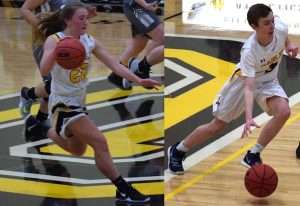 Last Tuesday, January 27th the Gilpin Eagles boy and girl’s varsities played games against the Denver Christian School Thunder. The games were played on Denver Christian’s home court in Lakewood Colorado. The girls played at 6:00 pm and the boys at 7:30 pm.

The Eagles boys entered the game without key starter Nolan Lindberg (24) who was still out with an injured ankle from a previous game.

The Eagles turned the tables in the 2nd quarter scoring 16 points to the Thunder’s 9. Eagles inputs came from Jessica Wilhelm (30) adding 2 2-point field goals, Camryn Ganz (22) contributing 3 2-pointers, Alicia Johnson (20) with a 2-pointer and one free throw each from Smith (2) and Sarah Trujillo (5). The Thunder had one 3 and 4 2-pointers and 2 free throws. The half time score showed the Eagles up by 1 point with score at 25-24.

The 3rd quarter looked a lot like the first quarter with the Eagles again scoring 9 points to the Thunder’s 15. The Thunder scored with 5 2-pointers, 1 3-pointer and 2 free throws. The Eagles Ramsey (12) added 3 free throws, Wilhelm (30) contributed 2 2-point field goals and Trujillo (5) added a 2-pointer. The period score stood at 34-39 with the Eagles down by 5.

In the final quarter the Eagles outscored the Thunder by 1 point, not sufficient to make up their 5-point deficit. The Thunder enhanced their total with 1 3-point field goal, 2 2-pointers and 4 free throws. The Eagles received contributions from Ganz (22) with a 2-pointer, Wilhelm (30) completed 2 2-pointers, Ramsey (12) adding a 2-pointer and 2 free throws, and Smith (2) contributed a 2-point field goal. The game ended with the Eagles down by only 4 points on a score of Eagles 46 to the Thunder’s 50.

On Friday, January 1st the Gilpin Eagles boy and girl’s varsities played games against the Twin Peaks Charter School Timberwolves. The games were played on Gilpin’s home court. The girls played at 6:00 PM and the boys at 7:30 pm.

Stephen King (4) opened the scoring with a 3-point field goal on the Eagles’ first possession followed by a Timberwolves 2-pointer. The Eagles quickly responded with a steal by Triston DiPasquale who fed King (4) for a fast break and layup.

The Timberwolves followed up with a 3-pointer tying the score at 5-5. Eagles’ DiPasquale (15) broke the tie with a 2-point field goal. The Timberwolves again tied the score with a 2-point field goal of their own. Again the tie was broken, this time by Trey Lindberg (3) with an Eagles’ 3-pointer. In the final minutes of the quarter the Timberwolves scored 4 more points via 2 field goals while the Eagles Blake Boulter (25) and King (4) each completed field goals for 4 points. The Eagles ended the quarter with a 3-point lead on a score of 14-11 and maintained a lead through the rest of the game.

Through the first half of the 3rd quarter the Timberwolves scored first with a 2-point field goal followed by 2 free throws. During the same segment of the period King (4) completed a 3-point field goal while Boulter (25) produced 2 free throws and a 2-point field goal establishing a score of 32-23 Eagles. With approximately 4:42 on the clock, Boulter (4), an Eagles key starter, committed his 4th foul at which time he was taken out of the game to ensure that he would not foul out before the final quarter. For the remainder of the quarter some of the Eagles non-starters, while gaining valuable game experience, stepped up and assisted in holding the Timberwolves to only one more 2-point field goal while the Eagles countered with another 3-point field goal by Lindberg (3) and an additional 2-pointer by King (4). The quarter ended at 36-25 Eagles.

The Lady Eagles dominated the game against the Timberwolves from the beginning of the 1st quarter with 5 unanswered points provided by Sarah Trujillo (5) with a 3-point field goal and Jessica Wilhelm (30) with a 2-pointer. Through the rest of the quarter the Timberwolves scored only 3 points with a field goal and a free throw. The Eagles put additional points on the board with 3-point and 2-point field goals and a free throw from Camryn Ganz (22), and 1 free throw each by Wilhelm (30) and Alicia Johnson (20). The quarter ended with a score of 13-3 Eagles.

In the 2nd quarter the Timberwolves again scored only 3 points with a field goal and a free throw. The Eagles scored 19 points in the quarter with contributions of 10 points by Ganz (22), 3 points by Trujillo (5), 2 points by Abigail Smith (1), 2 points by Johnson (20), and 1 point each by Nicole Adams (33) and Tommie DiMauro (13). At half time the scoreboard showed Eagles 32 to Timberwolves 6.

The 4th quarter generally mirrored the 3rd quarter with the Timberwolves scoring only 1 2-point field goal on the final score of the game while the Eagles again scored 10 points. The Eagles, 4th quarter points came from DiMauro (13) with 2-point and 3-point field goals for 5 points, Ganz (22) with 2 field goals for 4 points and Smith (1) with a free throw. The game ended on a score of Eagles 52 to the Timberwolves 10.

Point leader for the game was Camryn Ganz (22) with 20 points. The Eagles win against the Timberwolves placed the Lady Eagles’ wins to losses at 8-6 overall and a respectable 4-3 for League play.

END_OF_DOCUMENT_TOKEN_TO_BE_REPLACED

Where the dead get to tell their story By Jaclyn Schrock On Saturday, August 21, the Gilpin Historical Society held their annual Cemetery Crawl. Tickets allowed the shuttle of hundreds of guests from the Teller House parking lot to the Cemetery. Depending on v... END_OF_DOCUMENT_TOKEN_TO_BE_REPLACED

Benefitting the county, schools, and much more By Don Ireland   This year marks the 30th anniversary of casinos opening in the former little mining towns of Black Hawk, Central City and Cripple Creek, Colorado. In those early years, smoking was allowed inside ... END_OF_DOCUMENT_TOKEN_TO_BE_REPLACED