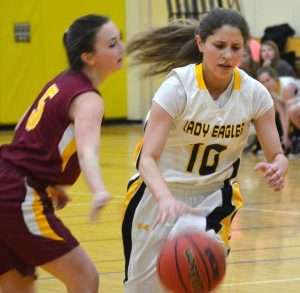 The Gilpin gym was the scene of fierce basketball battles between the Eagles and the Shining Mountain Waldorf (Boulder) Lions on Tuesday evening, January 26. The varsity girls triumphed 37-28; see details below. Gilpin’s junior varsity boys also bested the Lions 39-31. JV girls had no opponent, as Shining Mountain has no JV girls’ team. The varsity boys’ game story is reported separately.

Proceeds from ticket sales, concessions, and a raffle went to help defray medical expenses for Torin Perret, who was recently diagnosed with an inoperable tumor in his mid-brain. Torin’s mother is Susan Sepanik, a Gilpin Elementary School teacher. Torin, age 20, is a graduate of Nederland High School. He will begin chemotherapy and radiation treatments as soon as possible.

According to information provided by Gilpin High School, Torin has always been an adventurous and fun-loving person, passionate about outdoor activities. He is an avid backpacker, skier, and hockey player. “Torin has a hard time being sedentary. So let’s get him back out adventuring!”

The family is grateful for any donations, and community support means a lot to them.

Gilpin’s varsity girls led all the way on Tuesday evening against the Shining Mountain team, grabbing a 37-28 victory. Their team now owns a 4-9 record.

The game was a rugged one, but the Lady Eagles played as well as we knew they could. The eagle-eyed refs called fouls repeatedly on both teams, so a good share of the points were made by free throws.

Gilpin led 11-6 at the end of the first quarter and were ahead 20-8 at the half. The second half saw them pull ahead even farther, until they had widened the margin by about 15 points. The fourth quarter got a little shaky for Gilpin, though, as fouls were committed and Shining Mountain drew within 6 points. A timeout and pep talk by Head Coach Jeff Schuessler got things straightened away, and the Lady Eagles forged ahead quickly in the last couple of minutes to win.

Schuessler noted that the key to the win was “defensive intensity. We had good energy, good effort, and good attitude. Even when things got ugly, the girls kept their heads up.”

In other recent play, the Eagles experienced losses against Soroco, Dawson School, and Jim Elliot Christian.

Eagles’ junior varsity boys topped Clear Creek on January 20 on Gilpin’s home court, with a final score of 48-23. The first half of the game was decisively in Gilpin’s favor, 21-13. They continued to score well in the third quarter, ending with 36-18, and kept on going in the final period with another 12 points to win.

The squad traveled to Kiowa on the 23rd of January for their next tourney, having a great day of wrestling. Head Coach Craig Ball reported, “We have been working on body position and scoring moves during the last few weeks, and it was really nice to see their hard work pay off in their matches.”

The wrestlers had a winning record overall for the tournament and won some of their matches against kids that they had lost to earlier in the season.

The last regular season tournament is Saturday, January 30, in Stratton, with the regional tournament in Sterling on February 12-13.

END_OF_DOCUMENT_TOKEN_TO_BE_REPLACED

Benefitting the county, schools, and much more By Don Ireland   This year marks the 30th anniversary of casinos opening in the former little mining towns of Black Hawk, Central City and Cripple Creek, Colorado. In those early years, smoking was allowed inside ... END_OF_DOCUMENT_TOKEN_TO_BE_REPLACED

Where the dead get to tell their story By Jaclyn Schrock On Saturday, August 21, the Gilpin Historical Society held their annual Cemetery Crawl. Tickets allowed the shuttle of hundreds of guests from the Teller House parking lot to the Cemetery. Depending on v... END_OF_DOCUMENT_TOKEN_TO_BE_REPLACED