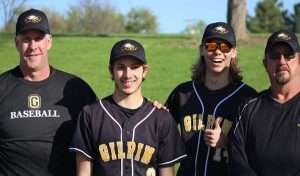 The Gilpin High School Eagles varsity baseball team surprised the Clear Creek Golddiggers of Evergreen with a come-from-behind 12-8 tournament win on Thursday, May 13. The tournament games were part of the 2017 CHSAA District/Regional baseball tournaments for Class 2A, District 7. The Eagles ranked sixth going into the tournament against number three-ranked Golddiggers.

After their win, Gilpin went on to face second-ranked Dayspring Christian on Saturday, May 13, concluding their season with a 15-1 loss to that team.

Gilpin ended with an overall record of 7-7, 2-4 in league action.

Lyons, ranked number one, lost to fourth-ranked Dawson School. Dayspring and Dawson played for the championship on the 13th, Dayspring winning 15-0.

In Gilpin’s win versus Clear Creek (CC), the Eagles began with a 3-2 lead in the first inning. That slipped away as CC tied the score in the second inning and shot ahead by 3 runs in the third and another in the fourth. CC got another run in the sixth inning, and thought they had the game in the bag, but Gilpin perked up with an amazing 5 runs to tie the score 8-8. They scored another 4 in the seventh and final inning to win it 12-8.

Senior Eryk Lorenz was selected as Player of the Game. He scored 1 run, had 3 singles, 1 RBI and 1 stolen base. He also had 5 put-outs, with 1 assist in the field. As winning pitcher, he pitching 5.2 innings with 5 strikeouts. “Outstanding effort in a must-win situation,” noted Head Coach Tony Lorenz.

Sam Snyder scored 3 runs to lead the Eagles, followed by Brekken Billman and Manny Gomez with 2 each. E. Lorenz, Chad Holmes, Cooper Lindberg, W. Lorenz, and Daniel Jewell each came in with 1 run.

Billman and E. Lorenz each contributed 3 assists, while Snyder helped with 2.

The Lorenz brothers each had 5 pick-offs.

While the baseball team was busy at the district tourney, the boys’ and girls’ varsity track squad competed at the Joe Shields Invitational Meet in West Grand.

Jack Ball will run in the Colorado State Meet at Jefferson County Stadium in Lakewood on Thursday, May 18, at 6:58 p.m. He qualified in the 400-meter with a time of 53.81. The meet runs through Saturday, May 20.

END_OF_DOCUMENT_TOKEN_TO_BE_REPLACED

Benefitting the county, schools, and much more By Don Ireland   This year marks the 30th anniversary of casinos opening in the former little mining towns of Black Hawk, Central City and Cripple Creek, Colorado. In those early years, smoking was allowed inside ... END_OF_DOCUMENT_TOKEN_TO_BE_REPLACED