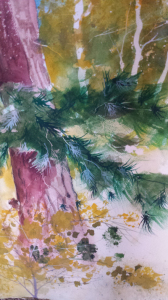 To coincide with autumn colors of Gilpin

On Saturday, September 20 and Sunday, September 21, the colors of autumn were shining in the Colorado sun as Gilpin Arts ran its annual Art Studio Tour. The Tour opens up the studios of local artists to the public to give a glimpse into the inspiration and work ethic of the artists. I’ve said it before and I’ll say it again – the artists hiding in the hills of Gilpin County are superbly talented and their works can easily be shown alongside those hanging in the Museum of Modern Art in New York City, much less the Denver Art Museum. The changing of the aspen is the backdrop for the intentionally scheduled tour so folks can gaze in wonder at the created beauty outdoors and in. A couple of new artists opened up their studios this year, including Violet Aandres, Gabrielle Gewirtz, David Serrano, and Tom Cowherd. Watercolors, ceramics, oils, mosaics, candles, raku, metal sculpture and more can be seen in the Art Studio Tour along the Peak to Peak Highway. Impressionism, realism, abstract, and the downright strange were gazed upon, remarked upon, and purchased by visitors. As the furious activity of the summer winds down and winter begins its crawl down from the divide, the Art Studio Tour is a perfect day to put your mind at ease and just enjoy the day.

END_OF_DOCUMENT_TOKEN_TO_BE_REPLACED

Benefitting the county, schools, and much more By Don Ireland   This year marks the 30th anniversary of casinos opening in the former little mining towns of Black Hawk, Central City and Cripple Creek, Colorado. In those early years, smoking was allowed inside ... END_OF_DOCUMENT_TOKEN_TO_BE_REPLACED