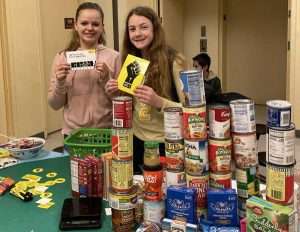 This week, Gilpin County School’s Amnesty International Chapter put on a food drive. Students rushed to the booth to exchange cans for lollipops. Can after can, the food donations started to stack up. Hearty beans to baby food were brought in. All the proceeds went to children who were separated from their families within the immigration system.Family separation is a major issue for this group. As Curt Halsted, the Gilpin Amnesty advisor puts it, “The goal of Gilpin Amnesty is to raise awareness for human rights abuses, separating children from their families is a tenuous process in any situation. In the immigration system right now migrant children are being caught up in a process that is difficult and painstakingly long. The goal of this fundraiser is to support Angelica’s Village, a Colorado program that assists migrant children. Whether a dream of a better future, or desperation is driving their families situation, these children may be American citizens someday. But beyond that immediate concern, they are also human beings in a difficult situation. I hope we can help, and raise awareness that can help find solutions that will make the lives of these individual family members better. The immigration process should be reformed.”

However, immigration reform is not the programs main goal. The young teens wish to end human rights violations in the United States in a non-political way. Acting on behalf of Amnesty International organization, they work directly with human rights activists. Giving students a chance to learn about human rights, and if they want to, branch out and get active. According to Archer O’Brien, club treasurer, “Amnesty is the kind of group that everyone wishes at one point or another that they were apart of because they see what is going on in the world and think to themselves “Hey, this isn’t right, I want to fix this.” For me, it’s amazing to be a part of something like Amnesty and to actually start making those differences. I know absolute equality is impossible to reach, but we should still strive to give everyone a chance to live life to the fullest, no matter where they are from, what color their skin is, what gender they identify as, or who they love. That is why I am in Amnesty.”

In the end, the club gathered plenty of food. In fact, as O’Brien explains, “Our school is a small one and it can be tough to get a large group of people working together on a project like this. We were pleasantly surprised when our peers brought in over 40 cans of food. However, the best part was witnessing how much one simple food drive can bring everyone together, working towards an important cause. That is pretty awesome.”

END_OF_DOCUMENT_TOKEN_TO_BE_REPLACED

Benefitting the county, schools, and much more By Don Ireland   This year marks the 30th anniversary of casinos opening in the former little mining towns of Black Hawk, Central City and Cripple Creek, Colorado. In those early years, smoking was allowed inside ... END_OF_DOCUMENT_TOKEN_TO_BE_REPLACED