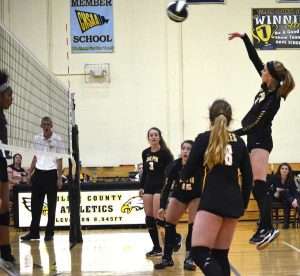 Eagles football team gives one up to Nederland

The Gilpin High School volleyball squad crushed Belleview Christian of Westminster 3-0 as they hosted Belleview on September 29 in home conference play. Set scores were 25/14, 25/16, and 25/6. The Lady Eagles now boast a 9-3 record, 8-3 at home.

Leading Gilpin in kills was Alex Martin with 7. Jada Gohdes and Lindsey James contributed 5 kills each, followed by Sierra DeLeon and Alexis Kennedy with 4 each. Martin was also first in serving aces with 6, and DeLeon and Kennedy snagged 3 and 2, respectively. James contributed one solo block. Kennedy helped her team to victory with 15 digs; Martin followed closely with 10, and DeLeon and Cicely Lepro each made 6. DeLeon had 15 ball handling assists. Serving received success was led by Lepro with 7, Martin with 6, and Kennedy with 4.

The Lady Eagles blew past Denver Jewish Day (DJD) 3-0 in another home conference game the next night, September 30. The Belleview game seemed only a warm-up to their victory over the DJD Tigers. Set scores were 25/13, 25/6, and 25/18.

Jada Gohdes and Alex Martin each had 9 kills to lead Gilpin, followed by Alexis Kennedy with 6 and Lindsey James with 2. James and Martin each hammered 4 serving aces; Sierra DeLeon mustered 3, Kennedy 2, and Gohdes one. DeLeon topped the Gilpin digs list with 10, while Kennedy and Cicely Lepro came in with 8 apiece and Martin followed with 6. DeLeon contributed 22 ball handling assists. The lead in serving received success was claimed by Martin with 13 and Lepro with 6.

The Lady Eagles went down 3-2 to the Community Christian Crusaders of Northglenn (CC) in a third home conference game on October 2. The Crusaders narrowly won the first two of five sets, 25/21 and 25/22. Gilpin battled back to triumph in sets three and four, 26/24 and 25/17. It was all riding on the fifth set, and it looked for a time as though Gilpin would pull it off. But with added pressure from CC’s clamorous supporters, the Lady Eagles lost the final set 15/11.

Lindsey James completed 9 kills, followed by Jada Gohdes and Alex Martin with 7 each; kills total was 26. The Lady Eagles had 4 serving aces and one solo block. The team boasted 104 digs, including 25 by Sierra DeLeon, 23 by Alexis Kennedy, and 22 by Martin. DeLeon and Cicely Lepro worked to improve Gilpin’s score with a total of 24 ball handling assists. Martin had a 25 in serving received success, along with Kennedy’s 16, Aspen Nadeau’s 15, Lepro’s 14, and 2 for Breanna Kennedy.

CC’s statistics were impressive and better than Gilpin’s: 50 kills, 12 serving aces, 13 solo blocks, 118 digs, 41 ball handling assists, and 88 successfully received serves. Despite the story told by the numbers, the Crusaders had to fight for every point, making it an exciting match.

Gilpin will face off next in an away game with Denver Waldorf on Friday, October 9.

Gilpin fans witnessed their gridiron athletes suffer a narrow loss to rivals Nederland Panthers on Saturday, October 3, on the Panthers’ field, with a final score of 28-20. The Eagles and the Panthers both hold season records of 3-2.

Gilpin scored a TD in the first quarter to start things off 6-0. The second quarter saw Nederland score one touchdown and a two-point conversion, holding Gilpin scoreless, to make the score 8-6, Nederland. After the halftime break, it was Nederland with 12 points in the third quarter against Gilpin’s 6 for a score of 20-12, Nederland. Both the Eagles and the Panthers racked up a touchdown and a conversion in the fourth quarter, to finish with a final score of 28-20, Panthers.

Manny Gomez was Player of the Game on defense for the Gilpin Eagles.

Matthew Immordino visited the end zone with each of the three touchdowns and the one conversion for the Eagles.

In passing, Chase Boulter threw six completions for 114 yards. Boulter also rushed in 44 carries for 203 yards; Immordino had 19 carries for 178 yards, and Jon Lovett rushed for 20 yards in 7 carries. The team made a total of 512 yards, compared with 367 in total passing and rushing yards for Nederland.

The Eagles made a total of 72 tackles. Solo tackles were made by leaders Kyle Viboolsittiseri with 9, Immordino with 8, Lovett with 7, and Eryk Lorenz with 6; the team had a total of 44 solo tackles. The Eagles garnered 28 assisted tackles, Lorenz and Gomez leading with 6 apiece and Nick Peterson coming in with 5.

Quarterback hurries were accomplished by Viboolsittiseri (twice) and Peterson and Sam Ghaffari (once each).

Gomez accomplished 2 interceptions and Immordino one for 8 yards.

Peterson and Gomez each recovered one fumble.

END_OF_DOCUMENT_TOKEN_TO_BE_REPLACED

Benefitting the county, schools, and much more By Don Ireland   This year marks the 30th anniversary of casinos opening in the former little mining towns of Black Hawk, Central City and Cripple Creek, Colorado. In those early years, smoking was allowed inside ... END_OF_DOCUMENT_TOKEN_TO_BE_REPLACED

Benefitting the county, schools, and much more By Don Ireland   This year marks the 30th anniversary of casinos opening in the former little mining towns of Black Hawk, Central City and Cripple Creek, Colorado. In those early years, smoking was allowed inside ... END_OF_DOCUMENT_TOKEN_TO_BE_REPLACED