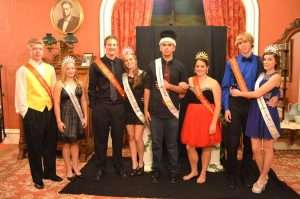 The Gilpin County High School football squad rolled over the Nederland Panthers 38-18 on homecoming night, October 16. With the win, Gilpin’s Eagles own a 4-3 record, 2-1 at home. Nederland also sports a 4-3 record, 1-2 away.

Head Coach Craig Ball was pleased with his team. “The game was hard fought, and they deserved the win.” He noted that for 8-man football in Colorado, the Eagles are number one in both total yards and total rushing, and team captain, senior Chase Boulter, is number one in total yards in the state.

Bjorn Tomlinson was honored as Defensive Player of the Game, with 5 solo and 4 assisted tackles and 2 sacks. He also scored 14 points in 2 TD’s and one conversion.

Gilpin travels to Justice Phoenix of Lafayette on October 24. They defeated Justice 60-20 in last year’s homecoming.

The game was the first ever played under stadium lights at night on Gilpin’s field. The weather was pleasant, only a refreshing 40 degrees or so. Eagles fans roared as their athletes charged out through a wall of special-effects fog and a phalanx of cheerleaders to take their positions. The middle school band energized the crowd, and eighth grader Sarah Trujillo led in the Star-Spangled Banner.

The Panthers shocked the Eagles with a touchdown within the first ten seconds. But Ned’s conversion attempt was no good. As the Eagles worked to get their heads in the game, Nederland ran in another TD a minute and a half later. Again, they failed to make the conversion, but were ahead 12-0. Gilpin’s coaches prodded their players with a forceful “what are you thinking?” and the Eagles clenched their jaws and started pushing back.

With 7:22 left in the first quarter, a burst of fireworks celebrated Gilpin’s first TD, followed by the 2-point conversion, giving Gilpin 8 points. Ned’s #39, Quin Kuechenmeister, was injured during the quarter but made it off the field with assistance.

The second quarter saw one of the refs inadvertently tackled, and as the teams grappled, the Panther’s #7, Bob Allen, sustained an injury and was taken off the field in a Gilpin Ambulance unit. (It was later learned that the injury was not serious, and Allen should make a full recovery.)

Everyone felt deep concern over Allen’s condition, and it was difficult to resume play as before. Relations deteriorated during the second quarter. The Gilpin contingent was not pleased with officials’ lack of calls over the actions of some Panthers players. But when refs began throwing flags on some plays and meting out penalty yards for Nederland, tensions quieted.

At just over five minutes left on the clock, Gilpin rallied with another touchdown and conversion. They followed that up with another 8 points with just one second left in the half to bring the score to 24-12, Gilpin.

The homecoming court was also introduced at the half, followed by a rousing routine by Gilpin’s cheerleading athletes and a cute-as-the-dickens performance by 51 Pee Wee Eaglet cheerleaders.

The two teams went scoreless in the third quarter, but in the fourth period, Tomlinson nabbed a long pass in the end zone, which was followed by the conversion. The score stood at 32-12, Eagles. Less than a minute later, the Panthers answered with another TD, making it 32-18. Then Gilpin scored again with seven minutes to go. On Nederland’s possession, the Panthers threw a long pass, which was intercepted by Jonny Lovett. Braedyn Perez also intercepted another Panthers’ pass attempt at 1:17 to go.

Leading scorers were Tomlinson and Matthew Immordino, each with 2 touchdowns and one conversion for 14 points apiece; and Boulter with one TD and 2 conversions for 10 points.

The Eagles managed a total of 446 total yards. Boulter completed 5 passes for 57 yards and led Gilpin in rushing with 175 yards in 36 carries. Immordino gained 142 yards in 25 carries and had 27 receiving yards, followed by Tomlinson with 52 yards in 10 carries and 30 receiving yards.

Leaders in tackling, including both solo and assisted tackles, were Eryk Lorenz with 11, Manny Gomez with 10, Tomlinson with 9, Immordino with 6, and Sam Ghaffari and Kyle Viboolsittiseri with 5 apiece.

Perez, Gomez, and Lovett each snatched one interception.