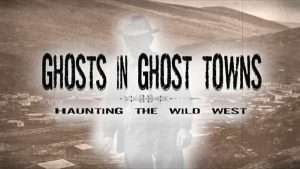 A New Documentary including Georgetown

We’ve traveled across the United States visiting ghost town after ghost town in an effort to visually preserve their histories and legends. Each town had its own tales of ghosts, spirits and hauntings that we’ve put together in our new feature film “Ghosts in Ghost Towns: Haunting the Wild West.” Georgetown is featured in the film as we visited several locations like the Hamill House and conducted an investigation at the Hotel De Paris.

Produced by Centre Communications located in Boulder, Colorado, from Executive Producer Ron Meyer, written and directed by Anna Meyer Evans and Alan Megargle, with narration from Tom Kimball, this documentary relives tragic stories of the past and investigates modern day tales of the paranormal.

Across America’s Old West are deteriorating ghost towns filled with reports of the paranormal, spirits of the dead that still roam the empty streets and saloons leftover from a time of lawlessness and violence. “Ghosts in Ghosts Towns” explores the eerie remains of the mining boom, the stories of the people that lived there, and the subsequent spirits that still haunt the towns of the Wild West.

END_OF_DOCUMENT_TOKEN_TO_BE_REPLACED

Where the dead get to tell their story By Jaclyn Schrock On Saturday, August 21, the Gilpin Historical Society held their annual Cemetery Crawl. Tickets allowed the shuttle of hundreds of guests from the Teller House parking lot to the Cemetery. Depending on v... END_OF_DOCUMENT_TOKEN_TO_BE_REPLACED