Ghostbusters remake not all that bad 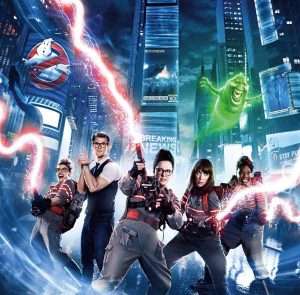 When the trailer first appeared for the new Ghostbusters film, it quickly earned the title “most hated trailer of 2016.” I think the biggest reason was confusion surround what this new movie was supposed to be; a sequel or a remake. The trailer opens with the words, “30 years ago four scientists saved New York, this summer a new team will answer the call.” All expectation from those words is a sequel, but the imagery that followed sure seemed to take the same path as the original with no acknowledgment that there were ever ghostbusters before this. No wonder people were confused! The original 1984 film, starring Bill Murray, Dan Akroyd, Harold Ramis, and Ernie Hudson, was something unique and different featuring favored actors from Saturday Night Live and SCTV. The film never took itself seriously and the dead-pan humor from Murray and Ramis kept the movie from straying into philosophical and theological territory concerning spectral phenomenon. A nostalgia built around the original has preserved it as something special, so it is with trepidation that the 2016 movie is considered.

Ghostbusters 2016 is a remake. For those who are not familiar, the story goes like this; a team of disgraced scientists come together to track down and capture ghosts that seem to be seen around New York with increasing frequency. The ghosts can be harmless or destructive; most, if not all, can interact with physical objects. The spectral invasion becomes dangerous and threatens the lives of all citizens unless it is stopped; and so the Ghostbusters are called into action as the only ones with the knowledge and equipment to do so.

The modern movie reverses the gender roles from the original so that the team is all women with a male secretary and the ghosts seem to prefer to inhabit and frighten men. The team is comprised of a scientist, Erin, played by Kristen Wiig (The Martian, Brides Maids), trying to distance herself from the paranormal, Erin’s best friend and scientist who never strayed from studying the paranormal, Abby, played by Melissa McCarthy (Spy, Gilmore Girls), a crazed genius inventor, Jillian, played by Kate McKinnon (Finding Dory, Ted 2), and an MTA Agent, Patty, played by Leslie Jones (Trainwreck, Wrongfully Accused), filling out the muscle and extensive knowledge of New York City; their clueless receptionist, Kevin, is played by Chris Hemsworth (Thor, In the Heart of the Sea).

The Good and the Bad

Ghostbusters, like its predecessor, is a comedy. However, almost half the jokes fell flat with no reaction from the audience. None of the women could pull off the dead-pan humor that played so well in the original. The jokes that do hit squarely work well however. Of course, with the modern age, the special effects are up to par with some decent improvements to the energy streams and ghost conceptualizations. For those that take the spiritual realm seriously, this movie has far more possession by ghosts than did the original, and it may run contrary to your own beliefs. The Ghostbusters have a few new tricks up their sleeves and new toys to play with. The pacing of the film worked well, although certain things were rushed, such as the time it would take to build the new components. As a bonus, the new movie is loaded with Easter eggs for knowledgeable movie-goers such as a bust of the late Harold Ramis unobtrusively displayed in a hallway and the end credits keep the entertainment coming until the very end.

The movie is rated PG-13 for supernatural themes and some crude humor. The crassness, though, was pleasantly reduced to just a couple of jokes; surprising considering some of the tropes the actresses have involved themselves with. The ghosts are a tad more frightening than the original, so consider carefully about bringing the youngsters with you. I went into this movie with low expectations and came out pleasantly surprised which is reflected in my rating. It gets knocked down for some comedic elements that distract from the movie, the overuse of human possession, and that it failed to draw Rick Moranis (Ghostbusters, Spaceballs) out of retirement. His presence is dearly missed. I rate the movie four out of five parade balloons; my lovely wife rates it three and a half out of five honorary busts; and my beautiful daughter rates it four out of five ghost grenades. Insider’s tip: if you decide to see the movie, be sure the stay through the credits.

END_OF_DOCUMENT_TOKEN_TO_BE_REPLACED

Where the dead get to tell their story By Jaclyn Schrock On Saturday, August 21, the Gilpin Historical Society held their annual Cemetery Crawl. Tickets allowed the shuttle of hundreds of guests from the Teller House parking lot to the Cemetery. Depending on v... END_OF_DOCUMENT_TOKEN_TO_BE_REPLACED

Benefitting the county, schools, and much more By Don Ireland   This year marks the 30th anniversary of casinos opening in the former little mining towns of Black Hawk, Central City and Cripple Creek, Colorado. In those early years, smoking was allowed inside ... END_OF_DOCUMENT_TOKEN_TO_BE_REPLACED