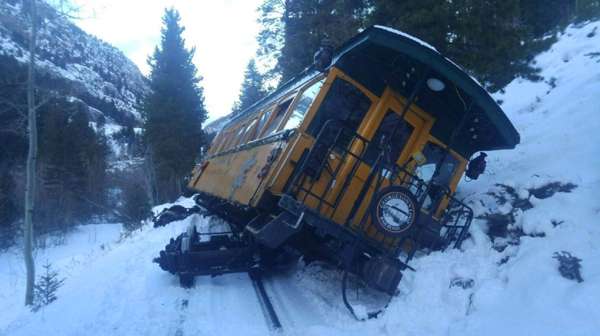 PRESS RELEASE – The Georgetown Loop Railroad went off the tracks and tipped onto its side during a passenger trip Tuesday afternoon.

Viewer Erin Doty said she was on the train with her parents, husband, and two kids for the ride with Santa. She says the trouble started just after the ride began for the 3:15 p.m. trip.

“It was less than a minute into the ride, then the train started going backwards, and felt oddly bumpy. After all of the bumpiness which got progressively worse, the train started tipping back and forth, back and forth. All of the passengers in there started shuffling around, started to get really concerned,” Doty said. “And then the train just flipped over onto its side. All of the passengers who were on one side of the train sitting down slid all the way on the other side of the train.”

“We were just trying to help people get up. Glass was breaking, shattering. People were crying, the kids were so scared. We were so confused about what was happening. And then finally somebody came through the door making sure everybody was okay,” Doty said.

She shared her pictures with the news reporters of the tipped train.

A spokesperson for the Georgetown Loop Railroad said there were no injuries and service on the tourist train was suspended for the rest of the day.

Doty said her father and son went to urgent care to be checked out after the incident.

In the photos she shared, you can clearly see the car was detached from its wheels.

The spokesperson said the company wasn’t sure yet what caused the accident, but he did say it was most likely mechanical failure or due to ice.

END_OF_DOCUMENT_TOKEN_TO_BE_REPLACED

Where the dead get to tell their story By Jaclyn Schrock On Saturday, August 21, the Gilpin Historical Society held their annual Cemetery Crawl. Tickets allowed the shuttle of hundreds of guests from the Teller House parking lot to the Cemetery. Depending on v... END_OF_DOCUMENT_TOKEN_TO_BE_REPLACED

Benefitting the county, schools, and much more By Don Ireland   This year marks the 30th anniversary of casinos opening in the former little mining towns of Black Hawk, Central City and Cripple Creek, Colorado. In those early years, smoking was allowed inside ... END_OF_DOCUMENT_TOKEN_TO_BE_REPLACED