Georgetown Lake to be dredged for additional capacity 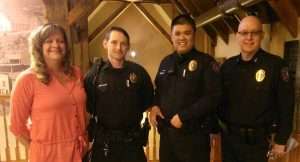 The City Council meeting began with three recently hired to Black Hawk staff making a team effort to ring the bell, announcing the beginning of the meeting. Their zealous effort rang it a slightly more than the traditional three times as it returned to its resting place. The meeting began at 3 pm Wednesday, March 14, 2018 in the City Council Chambers, upstairs at 211church Street, Black Hawk, Colorado.

There were no agenda changes, no conflicts of interest no public comments, and the minutes from the February 28th meeting were approved with no discussion.

The meeting moved on to the introductions of the new staff members made by Police Chief Stephen Cole. Once the three were introduced, and everyone hands were shaken to be welcomed aboard. Alderman Paul Bennet asked Chief Cole if these new folks all understood that they were to stick around for at least five years?  We all understood that they have all been found to be highly qualified to join the City of Black Hawk. The officers who have dedicated much of their lives in their efforts to keep the City of Black Hawk safe, chuckled.

Officer Nguyen grew up in Jefferson County and lived in Colorado for most of his life. Joseph’s parents are from South Vietnam and Cambodia and immigrated to the United States in 1975. That makes Joseph first generation Vietnamese-American. He attended Bear Creek High School and then Metro State where he studied Astrophysics and then on to the seminary in Minnesota. After two years of being back in Denver he went to the Pontifical Lateran University in Rome. Joseph is fluent in Vietnamese and English and can read and write basic Latin, Hebrew, Greek, French and Cambodian. He was assigned to Saint Anthony’s Hospital in Denver to complete bereavement and death counseling. Unfortunately, he contracted the H1N1 flu and was in a coma for 32 days. Doctors prepared to pronounce him dead when he rallied. He has a death certificate that is stamped VOID. Joseph has a Bachelor’s degree in Aviation Technology and a master’s certificate in security operation. He enrolled in the Law Enforcement Academy in 2015 and began work for the Colorado Department of Corrections after the Academy. He is excited to join the City of Black Hawk

Officer Steckman began his career with the Black Hawk Police Department in 2017 and has been in Law Enforcement for over six years. He comes to the department with experience and certifications, which will benefit the community, and he feels privileged to work in the Black Hawk Police Department. Officer Steckman is very outgoing and says what he enjoys the most is time with his family.

Communication Officer Logsdon is a Colorado native. She recently moved to the Black Hawk area and accepted a position with the City of Black Hawk in their Communication Center. Previously she held the position of dispatcher for a Plumbing and Heating Company as well as an Alarm Company. Kelly enjoys the outdoors, especially fly fishing and hiking with her boyfriend and son. Kelly is also an avid reader. She has two children and three grandchildren who she loves spending time with. Kelly was interested in the position with the Police Department because she wanted to be able to help people and be part of the community. She is anxious for this career opportunity with the City of Black Hawk.

Council Bill 3, An Ordinance amending the International Building Code, 2015 Edition and International Fire Code, 2015 Edition, as adopted by the City of Black Hawk. Community Planning & Development Administrator Cynthia Linker explained appropriate previous notification of the code changes have been completed. The primary adaptation to the building code is in reference to the potential ultimate top wind speed to recognize the safety of the buildings during gusts. Changes are recommended in the code because of the 2006 Colorado Front Range Gust Map prepared by Cermak Peterka Petersen of Fort Collin. The fire code mentions more specific needs for automatic sprinkler systems in some additional categories of buildings. These international codes were approved with no discussion about any differences with state and national codes.

Council Bill 4, An Ordinance approving a Memorandum of Understanding between the Town of Georgetown and the City of Black Hawk for the design and construction management of the Georgetown Lake Lagoon Dredging Project. Senior Civil Engineer for Water Resources, Jim Ford of the Public Works department explained the dredging project and details of the Memorandum of Understanding as the two municipalities are joining forces again. Since January 2014 the City of Black Hawk has the right to store 154.5 acre feet of water in the Georgetown Lake, according to an intergovernmental agreement between Black Hawk and the Town of Georgetown who owns and operates Georgetown Lake. The agreement says that any major repairs or operating expenses will be shared for the lake at a ratio of 40% by Black Hawk and 60% by Georgetown. It has been determined that an increase of 40% more water storage space could be gained by dredging 70,000 cubic yards of material from Georgetown Lake. Council Bill 4 passed with no discussion.

Resolution 21-2018, A Resolution approving a personal services agreement between the City of Black Hawk and M&C Communications. City Manager Jack Lewis is the staff member responsible for the contract funded through the marketing budget for the City of Black Hawk. City Clerk of Administrative Services Director Melissa Greiner presented this resolution and answered some questions while Mayor Spellman also contributed information to the Council. M&C Communications has been contracted with the City of Black Hawk since July 2017 as a Public Relations Consultant. They will receive a monthly allocation of funds to promote traditional and new events the City is planning. Promotion of events ranges from culinary students demonstrating skills, to the  Maryland Mountain Tramway Project to the fireworks display, to name a few. After a few questions and discussion the resolution passed.

The next meeting for the City of Black Hawk City Council will be Wednesday, March 28, 2018 at 3 pm at 211 Church Street, Black Hawk, Colorado.

END_OF_DOCUMENT_TOKEN_TO_BE_REPLACED

Benefitting the county, schools, and much more By Don Ireland   This year marks the 30th anniversary of casinos opening in the former little mining towns of Black Hawk, Central City and Cripple Creek, Colorado. In those early years, smoking was allowed inside ... END_OF_DOCUMENT_TOKEN_TO_BE_REPLACED

Where the dead get to tell their story By Jaclyn Schrock On Saturday, August 21, the Gilpin Historical Society held their annual Cemetery Crawl. Tickets allowed the shuttle of hundreds of guests from the Teller House parking lot to the Cemetery. Depending on v... END_OF_DOCUMENT_TOKEN_TO_BE_REPLACED