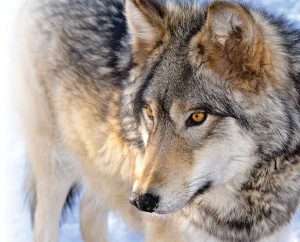 Colorado Parks and Wildlife (CPW) biologists have received notification back from a genetics lab confirming that four scat samples collected near a scavenged elk carcass in Moffat County in early January came from wolves. This is the first official documentation of a pack of wolves in the state since the 1940s.
Of the four samples, DNA results indicate three are female and one is male. The testing was also able to determine that all the wolves were related, likely as full siblings.
“The DNA doesn’t tell us the age,” said CPW Species Conservation Program Manager Eric Odell. “We don’t know where or when they were born. We can’t say. But that there are closely related wolves is a pretty significant finding.”
Odell also noted that “although previous reports had mentioned sightings of up to six wolves, this doesn’t do anything to alter that estimate. Just because we only collected four scat samples doesn’t mean there were only four animals.”
CPW is still waiting to receive results back from scat samples collected at a potential wolf sighting in Moffat County on January 19.
CPW would like to remind the public that wolves are a federally endangered species and fall under the jurisdiction of the U.S. Fish and Wildlife Service. According to the US Fish and Wildlife Service, killing a wolf can result in federal charges, including a $100,000 fine and a year in prison, per offense.
The public is urged to contact CPW immediately if they see or hear wolves or find evidence of any wolf activity. The Wolf Sighting Form can be found on the CPW website.
For more information about wolves, visit the CPW website.

END_OF_DOCUMENT_TOKEN_TO_BE_REPLACED

Benefitting the county, schools, and much more By Don Ireland   This year marks the 30th anniversary of casinos opening in the former little mining towns of Black Hawk, Central City and Cripple Creek, Colorado. In those early years, smoking was allowed inside ... END_OF_DOCUMENT_TOKEN_TO_BE_REPLACED

Where the dead get to tell their story By Jaclyn Schrock On Saturday, August 21, the Gilpin Historical Society held their annual Cemetery Crawl. Tickets allowed the shuttle of hundreds of guests from the Teller House parking lot to the Cemetery. Depending on v... END_OF_DOCUMENT_TOKEN_TO_BE_REPLACED