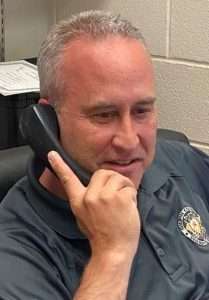 After 27 years of serving Gilpin County, Division Chief Tom Ihme will be retiring from the Gilpin County Sheriff’s Office on September 1. Tom started his career with the Sheriff’s Office in 1993 as a dispatcher and has since served in many capacities throughout the years. Tom attended the police academy to become a certified peace officer in the State of Colorado (POST). He continued to work in dispatch and used his POST certification to continue to serve the residents of Gilpin County as a reserve deputy. In 1997, Tom took a position as a jail deputy. Due to his exemplary performance in the jail, after a year he was promoted to Corporal. In 1998 the sheriff’s office went through a reorganization, corporals became sergeants, and sergeants became captains. After two years as a sergeant, Tom was promoted to the sheriff’s office first ever position of lieutenant. As a new lieutenant, he supervised both the patrol and detention divisions, evidence, and was a SWAT commander. About two years later Tom was promoted to Captain. In 2019 another reorganization occurred, and the captain positions were eliminated and Tom became the Division Chief for patrol. He has spent 24 of his 27 years at the Sheriff’s Office in some form of supervisory capacity which speaks volumes as to his work ethic and dedication.

Tom said his greatest accomplishment was building and maintaining a relationship with Central City and negotiating the original Intergovernmental Agreement (IGA) in 2016 for the sheriff’s office to provide all law enforcement services to Central City, and he has maintained this positive working relationship for the past four years.

When asked what his most stressful call was, Tom responded with, “I don’t get stressed out on calls. I maintain my composure in adverse conditions and situations. However, there were a few calls that are memorable.

On one, at about 10:00 p.m. one night a deputy was driving on Virginia Canyon Road and came across a suspicious vehicle. When the deputy got out of his patrol car to investigate, the male party got out of this vehicle and pointed a laser at the deputy’s chest and then ran into the woods. The deputy called for help and when Tom heard the call he “hauled ass” to assist the deputy. Several other law enforcement personnel arrived to search for the suspect. There was a stand-off with the suspect throughout the night with the suspect firing shots at law enforcement during the night. The suspect was taken into custody without incident at sunrise the following morning.

Another time, Tom performed CPR on an infant, but unfortunately was unable to save the baby. This was an incredibly difficult call for any first responder. A couple of days later the coroner called and advised the infant had died of meningitis. Tom and other first responders had to go and get tested for meningitis.

Before marijuana became accepted or legal, the sheriff’s office did a lot of enforcement on illegal grows where Tom was a very integral part of the successful missions.

Tom has been a first responder since 1990 serving as a sheriff’s office deputy and supervisor, Central City firefighter, and Search and Rescue (SAR) member. He was on the Central City Fire Department for 15 years. Before he came to the sheriff’s office, he said he was poor. He worked for Central City as a firefighter getting paid $10 for each call he responded to, and would never miss a call. He would not take his girlfriend (later to become his wife), Cary, on a date to Denver and risk missing a call. He said if he went to Denver and spent $20 and missed a call, he would lose more money. Cary eventually joined Central City Fire Department so she could spend more time with Tom. Tom and Cary started dating in 1993 and married in 1999. Tom said, “This was the best move he has ever made in his life.”

When gaming came to Colorado in 1991, there were 22 fatal accidents in the first year in Black Hawk and Central City. He attributes these horrific events as incentive to provide the training, preparation and foundation for his career in law enforcement.

Tom responded to three different plane crashes in the backcountry of Gilpin County. He assisted in the dismantling of the planes to be removed from the scenes for investigation. He said he will never fly in a small plane again because they are made of “pop cans.”

Some of his favorite parts of working with the sheriff’s office were the special operations. He “thrived” on the stressful situations. “When crap hit the fan, I would kick it into gear,” he said.  He loved the execution of these types of operations which required a great deal of operational planning, which was not his favorite part.

Tom talked about how important the community is to Cary and himself. He said the community has done a lot for him and he loves giving back to it. Every year Tom and Cary give a scholarship to a deserving senior at Gilpin County High School.

Tom bought Base Camp in 2014 and planned on working full time at the campground after Sheriff Bruce Hartman’s term in 2015. When Bruce made the decision to run for sheriff again, Tom decided to stay and thought he would retire and run the campground full time at the end of Bruce’s last term. However, once again, Tom being the dedicated employee that he is, stayed an additional two years because I asked him to stay.

Since Tom was a kid, he has had the dream of owning a marina. He quickly found out that Colorado had very few marinas, so he started looking for a campground. For years he looked at different campgrounds around the United States. He found a campground in Florida, but Cary wanted him to find something closer to home (Colorado). He negotiated for two years with the old owners of the campground now called Base Camp and Pickle Liquors. Tom has transformed Base Camp into a destination resort for Denverites and others. Tom and Cary have taken this campground and made it into a very viable business that both locals and others greatly appreciate.

I asked Tom if he had any regrets over his career. Tom said he was not very approachable in his earlier years at the sheriff’s office as a deputy or as a supervisor. Tom laughed and said, “There was always a reason for his madness.”

Tom regrets not going to college. He said he missed a great opportunity to better himself, “I didn’t take advantage of this.”

Tom plans to run his Base Camp and Pickle Liquors business and spend more time with his family in retirement. For Tom, his family has always come first. He enjoys cooking, hunting, ATVing and spending time with his brothers doing these things. He wants to continue to do what he can for the community, but he plans on doing some traveling and seeing more of what the United States has to offer. Ireland is on his bucket list and hopes to get there soon.

Tom has given 27 years to the Gilpin County Sheriff’s Office and to the community, and his institutional knowledge of the sheriff’s office and community cannot be matched. I have always respected Tom for his honesty and integrity. I could always depend on Tom to give me a different perspective on the operations within the sheriff’s office. Tom will be greatly missed.

There will be a retirement celebration for Tom in the hallway on the lower level of the Justice Center on Thursday, August 27, at 3:00 p.m. Please come by and thank Tom for his many years of dedicated service to the sheriff’s office and the citizens of Gilpin County.

Thank you Tom – I will always treasure our professional and friend relationship – good luck!

END_OF_DOCUMENT_TOKEN_TO_BE_REPLACED

Where the dead get to tell their story By Jaclyn Schrock On Saturday, August 21, the Gilpin Historical Society held their annual Cemetery Crawl. Tickets allowed the shuttle of hundreds of guests from the Teller House parking lot to the Cemetery. Depending on v... END_OF_DOCUMENT_TOKEN_TO_BE_REPLACED