“Frozen II” – The Search for Aurora 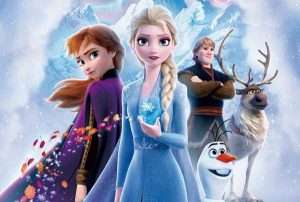 Perhaps the most anticipated animated movie sequel just glided into theaters this last weekend prompting young princesses from across the land to gather, regaled in floor-length ice-blue dresses. Walt Disney Animation Studios does not have a great track record when releasing a sequel to a hit movie, (I’m looking at you, “Cars 2”) so with a good deal ofcynicism, I waded through over-excited children to see this movie with a group of friends.

Queen Elsa, voiced by Idina Menzel (“Rent,” “Wicked”), is troubled by a disembodied voice, voiced by Aurora (“Nikto ne znaet pro seks,” “Comedy Club”) that only she seems to hear, which interrupts her thoughts with a haunting four-note melody. As the cast naively sings “Some Things Never Change,” Elsa is reminded of a story her parents told her about an enchanted forest guarded by four elementals: earth, fire, air, and water; that was enshrouded in an impenetrable fog after a peace summit between Arendelle and the Northuldra, a culture living in the far reaches of the North, goes south and all but young Agnarr (father of Anna and Elsa), voiced by Alfred Molina (“Spider-Man 2,” “Don’t Let Go”) perish. Agnarr only remembers he was saved by a someone with the voice of an angel. When Elsa follows the voice, fighting against the urge to go into “the great unknown,” she accidentally wakes the elementals who immediately cause trouble; hurricane force winds, rolling earthquakes, crashing waves, and all the fires of Arendelle are extinguished. The people seek shelter in caves high above the town while Elsa, her sister Anna, voiced by Kristen Bell (“Veronica Mars,” “The Good Place”), Anna’s boyfriend Kristoff, voiced by Jonathan Groff (“Looking,” “Glee”), Kristoff’s special reindeer friend Sven, also voiced by Jonathan Groff, and the living snowman Olaf, voiced by Josh Gad (“Murder on the Orient Express,” “Beauty and the Beast”), travel to the far northern reaches to save their town. The journey will test Elsa to her limits causing the other four to find strength they didn’t know they had.

I am going to take a pause here to discuss expectations of movies; specifically, those of the Disney variety. Disney (films carrying the Disney name – does not include Marvel, Fox, Buena Vista, Lucasfilm, or Regency) has a long-standing reputation of creating engaging tales of adventure, danger, love, and laughter which will always, yes always, have a happy ending. The happy ending usually involves the saving of all people and all things that have importance in the movie and those who fall in love either get together for the first time or get married, and someone often gets crowned. Knowing this, you can safely go into a Disney film and enjoy the journey without concern for the protagonist characters. “Frozen II” does not break this tradition.

Music. Unlike many sequels, the composers for “Frozen II” passionately put their best score forward and created another great collection of songs for this movie. “Some Things Never Change” is an upbeat song utilizing all the voices; Elsa’s “Into the Unknown” carries familiar melodies from the original tweaked into some thing new to blend with The Voice’s four-note melody and cleverly conveys the combatting wills of Elsa’s heart and her mind; Olaf’s mantra for the movie, “When I Am Older” is not only a great marshmallow pop, but also carries a great theme for children that it’s okay that they do not understood some things; they’ll understand when they are older (I’m still waiting to understand some things myself); Kristoff’s “Lost in the Woods” is an unexpected interlude in the action which is absolutely hilarious for adults (most children will not get it – nothing obscene; rather a riff on pop culture); and Anna’s “The Next Right Thing” (my favorite) is a song of finding hope out of overwhelming hopelessness.

Animation. The animators have created beautiful imagery with the perfection standard of the Disney brand.

Lessons. There are two great lessons in this movie suitable for all children: the first is that life is not a constant and when things change, it will be okay; the second is that when the changes you can’t control become unbearable, don’t worry about the road ahead, all you need to do is the next right thing.

Deeper. “Frozen” came out six years ago and the script writers kept in mind that most young fans are also older and more mature. There are deeper themes and darker imagery depicting sorrow, confusion, heartache, and even death.

Shortcuts. The plot would take shortcuts to get a character or a situation from point A to point B. I am not sure if this is due to editing for a shorter run-time, or if the screenwriters decided certain things were not worth explaining or telling.

Deus Ex Machina. This is Latin for ‘god from the machine’ and when used in scriptwriting, it usually means the writer wrote their character into a corner and had to create a solution out of thin air to get their character out of the situation. This is not always a bad thing, but when it’s use feels like it was pulled out of thin air, that feeling translates to the story. Unfortunately, this movie has at least two instances when this is used in the bad way. Your kids won’t notice.

If you want a safe Disney movie to take the family to, you will certainly enjoy this film. If you want this film to be six-years more mature (being six years since “Frozen” was released), you will be thrilled with the deeper elements of the story, but the ending will be an icy disappointment. Much was said of change in the story, but by the end, very little actually changed; however, it was still happy and magical. The film is rated PG for action/peril and some thematic elements. Be prepared to talk to your young ones about loss and change. My Disney loving friends adored the movie and on a scale of five; my delightful friend Katy rated it five sleeping giants; my intriguing friend Abby rated it four water-ponies; my engaging friend Karen rated if four singing reindeers; and my lovely daughter rated it three and a half Samantha’s. I am torn, because I love a good Disney movie, but I hated the ending (not where the characters ended up, but how and why they got there) and so I rate it three hands.

END_OF_DOCUMENT_TOKEN_TO_BE_REPLACED

Where the dead get to tell their story By Jaclyn Schrock On Saturday, August 21, the Gilpin Historical Society held their annual Cemetery Crawl. Tickets allowed the shuttle of hundreds of guests from the Teller House parking lot to the Cemetery. Depending on v... END_OF_DOCUMENT_TOKEN_TO_BE_REPLACED