Published 9 years ago Linda Jones9y ago 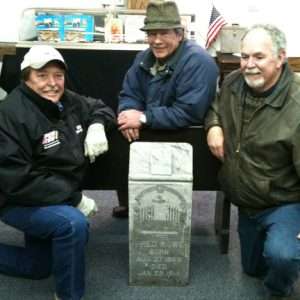 Fred Rowe was buried in the Knights of Pythias Cemetery above Central City in 1914 with an elegant stone memorial to mark his grave, but Fred’s stone traveled to the ‘big city.’ Thanks to an alert recycler, the errant tombstone has been returned to Central City, and the Gilpin Historical Society will return it to its rightful location next summer.

John Hatfield picks up asphalt, wood and concrete to be recycled by Oxford Recycling. On that eventful day he had already dumped two loads without checking their contents, but on his third trip, he felt compelled to check on the load before he drove “up the hill” and dumped it, where it would be immediately crushed. When he looked in the load, he spied the corner of the tombstone. Hatfield has always been a collector who values the rich history of our state, so he talked a friend into helping him move the 250 pound stone to his pickup.

After the stone was safely stored in his yard, John called his friend Art Hill, who located information on Fred Rowe on the internet and learned where the stone belonged. He then called Colleen Stewart, Gilpin County Clerk & Recorder, and told her they planned to leave the stone at the entrance gate to the Pythias Cemetery. She thought that the stone left unprotected through the winter would probably ‘walk’ again and a meeting and transfer was arranged for Sunday, February 10, at Washington Hall, where the Gilpin Historical Society can safeguard it until it is relocated.

Dave Main is a close friend of John and Art – in fact, the three graduated together from Littleton High School – and they are all descendants of pioneer Colorado families; they all proudly sport ‘Pioneer’ plates on their vehicles. They met a welcoming committee of six in front of Washington Hall: Maggie Demers, the guide at Washington Hall that day, Gail and Mike Keeler, Colleen and Jimmy Stewart and this author. All the locals were awed by the pristine condition of the stone. Other than a chip off each top corner, the stone looks untouched by weather or humans. The carvings on this lovely tombstone are more readable than any of the other stones a century old in the county, which leads to a theory that this stone was ‘robbed’ from the gravesite about the middle of the 20th century. The stone gives Fred’s birth year as 1869, although the internet site ‘USGenWeb Archives’ gives it as 1860. The stone gives his death year as 1914, which would make him 44 years old, and apparently he was a single miner.

The Knights of Pythias Lodge was established in America in 1864 and is an international, non-sectarian organization. Their principles are Friendship, Charity and Benevolence, thus explaining the large letters F, C and B on the engraved stone, which also has flowers and a lovely gate etched into it.

The Central City community thanks the three men for their stewardship of this gravestone. The cemeteries surrounding the early gold towns in Gilpin County have suffered from countless acts of destruction through the years, and everyone involved is grateful that John, Art and Dave chose to do the right thing.