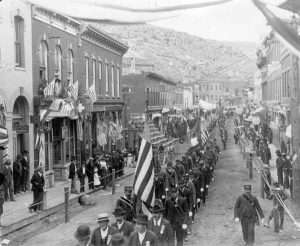 Celebrating from Central City to Georgetown

The town of Nevadaville held a two-day Fourth of July celebration in 1898. J.T. Semmens was Marshal of the Day. On July 4th the celebration began with a Grand Parade at 10 a.m., with one band in attendance. Then E. J. Rush read the Declaration of Independence. The rest of the day was dedicated to sports, primarily races of many types. Such as: children, men, ladies, and donkeys. The potato race was for participants under the age of eight. The egg and spoon race could prove to be messy.

The top first prize was $10 and four events featured this award: team pulling with four teams entered, the one hundred yard dash, which was a free for all, and the Fireman’s Handicap race of 100 yards. Cash amounts were also given to second place winners and some events gave third place prizes. The last competitive event of the day was step dancing to win $5. After all the competitions, the Grand Pavilion Ball was held. At night, the fireworks were shot-off from the Ophir Mine.

On July 5th, at 9:00 a.m., the Callithumpian parade to King’s Flat took place for a $10 first prize. A Callithumpian parade is a loud, boisterous, spontaneous parade involving crude noisemakers such as cow bells, pots, and pans. At 10:00 a.m., the cricket game between the Mountain Daisies and Denver began. At the same time the baseball game featuring the Nevada Stars versus New York also began. The pig race was the next competition. One of the highlights must have been the grand balloon ascension on King’s Flat. Then the final competitions were held: wheelbarrow race (blind folded), obstacle race, tug-of-war, and more running races. The tug-of-war competition featured four teams and the first prize was $50. The last event of the day was another dance competition. This time a waltz competition to win $5, followed by the Grand Pavilion Ball in the evening. It was finally time to pack up the remains of the picnic lunches and head home to look forward to next year’s celebration.

END_OF_DOCUMENT_TOKEN_TO_BE_REPLACED

Where the dead get to tell their story By Jaclyn Schrock On Saturday, August 21, the Gilpin Historical Society held their annual Cemetery Crawl. Tickets allowed the shuttle of hundreds of guests from the Teller House parking lot to the Cemetery. Depending on v... END_OF_DOCUMENT_TOKEN_TO_BE_REPLACED