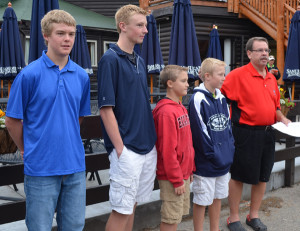 GCEF Board Vice President and professional fund raiser Sarah Swanson said there were more sponsors of the tournament than in previous years. According to Swanson, an all-time record $11,000 had been donated by The Clinton Family Fund, Isle of Capri Casino, Saratoga Casino, ASAP Asphalt & Concrete, and Same Electric Company.

Before the tournament got under way at 8:00 a.m., participants were welcomed by Craig Holmes, President of the GCEF. He introduced several members of Gilpin County School’s National Honor Society, reminding the golfers, “These students are why you’re here.” Holmes also recognized other Foundation Board members, who had helped with the tournament in various capacities.

Besides raising funds for students, the goal of the tournament was to have fun. Following the game, pros and duffers alike enjoyed a Mexican buffet, with awards and raffle prizes.

Players got a shotgun start; each team teed off simultaneously from different holes. The tournament format was a standard four-person best ball scramble, where everyone on the team takes a shot and the best ball is played.

Players were permitted to buy “Mulligans” at three for ten dollars. A Mulligan is an opportunity for a do-over on a poor shot, without taking a penalty. That allowed the golfers to donate still more to the charity. Holmes commented, “Every dollar counts!”

Hole-in-one prizes were offered on all of the par 3’s of the course. Those included one cash prize of $10,000, multiple golf vacations at resorts in San Antonio, Texas and French Lick, Indiana, and a $500 online shopping spree. No one got a hole in one, so those prizes went unclaimed.

Among the many items being raffled were golf clubs and other golf items, Rockies tickets, a St. Andrews golf gift basket, and a GPS system. Special prizes were a vacation trip for two to San Antonio or French Lick, Indiana and a $500 on-line shopping spree.

The GCEF’s goals for the 2014-2015 school year are to help fund technology needs, outside learning opportunities, and athletic and extracurricular activities, and to provide scholarships.

The Foundation was established in 1994 to receive funding on behalf of programs and projects for the Gilpin County School District. Among many past projects, GCEF has given mini-grants to teachers, bought supplies for needy students, helped purchase “smart boards” and a Docucamera, and donated to athletic camps. $40,000 has been raised in the past five years.

A new project for GCEF is the Mt. Thomas Action Fund, which supports Gilpin students individually and in groups. The Fund is intended to provide grants for educational purposes, such as for athletic uniforms. Grant applicants must show that they are also making an effort to do fundraising of their own.

Through GCEF’s Teacher/Coach Support Grants Program, funds go to teachers or coaches in the Gilpin County RE-1 School District for materials, supplies, special programs and projects, or professional development that will improve classroom or sports programs. GCEF also now has a license to raise funds legally through bingo and raffles.

The Foundation will hold its annual scholarship fundraising dinner on November 8 at the Isle of Capri Casino at 6:00 p.m. Last year’s dinner raised $5,000, and four scholarships were awarded. Any student who is a Gilpin County resident may apply for a scholarship.

The GCEF is operated by a volunteer Board of Directors made up of local Gilpin County residents who get involved because they care about Gilpin County students. Board officers are Craig Holmes, President; Sarah Swanson, Vice President; Kevin Armstrong, Treasurer; and Kellie Bayne, Secretary.

END_OF_DOCUMENT_TOKEN_TO_BE_REPLACED

Where the dead get to tell their story By Jaclyn Schrock On Saturday, August 21, the Gilpin Historical Society held their annual Cemetery Crawl. Tickets allowed the shuttle of hundreds of guests from the Teller House parking lot to the Cemetery. Depending on v... END_OF_DOCUMENT_TOKEN_TO_BE_REPLACED

Benefitting the county, schools, and much more By Don Ireland   This year marks the 30th anniversary of casinos opening in the former little mining towns of Black Hawk, Central City and Cripple Creek, Colorado. In those early years, smoking was allowed inside ... END_OF_DOCUMENT_TOKEN_TO_BE_REPLACED