Food and snow served up in Central City 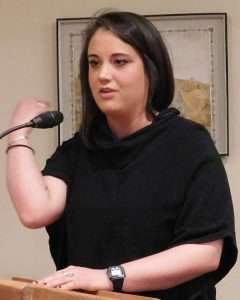 Central City Council met with Staff for a Work Session at 6:00 p.m. on Tuesday, March 5, 2019. Sophie Oppenheimer and Emma Kett from the LiveWell Colorado program gave a presentation based on a food study conducted in Central City and Gilpin County. Kett highlighted some of the critical findings from the survey. In choosing where to shop for groceries, locals considered affordability, quality, and convenience to be the most important factors. Their most desired foods were fresh produce and meats, vegetables, and general groceries. Kett then offered some suggestions for the City to get food into the food desert. First, to hire a full or part-time Food Systems Coordinator that would facilitate collaboration between existing programs, cities and other partners Other suggestions would be to develop a community-driven grocery shopping program with volunteers who already commute from the metro area; make food more mobile by increasing transportation routes to stores or create delivery services such as mobile food pantries; to increase awareness of existing farmers’ markets (The Holistic Homestead CSA program) by increasing the variety and quality of the food available; and finally to implement programs such as SNAP and DoubleUp Colorado at the farmers market. Discussion ensued between guests, staff, and council members regarding these ideas, but no specific direction was given to Staff.

Mayor Pro tem Laratta led the Pledge of Allegiance and then asked for any amendments or additions to the evening’s agenda. Manager Miera requested the minutes from the March 1 special meeting be added to consent agenda.

Mayor Pro tem Laratta asked if there were any conflicts of interest for any member of the council. There were no conflicts expressed.

The Mayor pro tempore called for a motion to approve the consent agenda which consisted of the minutes from the February 19 and March 1 meetings and regular bill lists through February 25. Alderwoman Mitchell moved to approve the Consent Agenda and was seconded by Alderman Aiken. The motion passed unanimously.

Mayor Pro tem Laratta opened the floor to the public for anyone who wished to speak to a topic on that night’s agenda. No one chose to speak to the Council at this time.

Attorney McAskin reviewed the continuance of Ordinance 19-02 which would amend the Municipal Code to establish a citation procedure for addressing specified violations of the Municipal Code adding a new Article X to Chapter 2 titled “administrative Penalty Citations for Code Violations.” This allows the City to enforce property maintenance including snow removal and enact penalties.

Mayor Pro tem Laratta opened the public forum for Ordinance 19-02, but no one chose to speak to council.

Alderwoman Mitchell moved to approve Ordinance 19-02 and was seconded by Alderman Hidahl. The motion passed unanimously.

Mayor Pro tem Laratta opened the public hearing for Ordinance 19-03, but no one chose to speak to Council.

Laratta commented, “I think this is a really good idea.”

Alderwoman Mitchell moved to approve Ordinance 19-03 and was seconded by Alderman Hidahl. The motion passed unanimously.

The Council was presented with applicants for three Commissions for their approval: Chuck Webster for the Historic Preservation Commission (HPC); Allyson Shellhorn for the Planning Commission; and Jeff Hentschel for the Main Street Commission.

Alderman Hidahl asked, “Did we get any other letters of interest for these positions and how have we gone about getting info to people?” Manager Miera responded that the City has received no other letters of interest. They have notified the public by posting in all assigned locations, including an announcement in the water bills, and posting on the Facebook page. Hidahl commented that “I think these appointments are so important we need to take extraordinary measures for applicants.”

Alderman Aiken commented on the application of Jeff Hentschel (co-owner of GF Gaming which operates Famous Bonanza and Easy Street casinos), “He is very active in the community and promotes one of our biggest events (the Night of Good Fortune event), I think he would be a good candidate for this position; he is a business owner and has a stake in this City.”

Alderman Hidahl asked if anybody has interviewed these candidates or know their backgrounds.” Miera responded that he could supply additional information, but could say that the individuals are qualified according to the Municipal Code. Hidahl replied, “I have nothing in opposition against any of these candidates; I’m trying to demonstrate this is a deliberate process and they have been selected carefully,” to which Alderman Aiken facetiously commented, “Especially high-paying jobs like these.”

On the question of Chuck Webster for HPC, Alderman Aiken moved to approve his appointment and was seconded by Alderwoman Mitchell. The motion passed unanimously.

On the question of Allyson Shelhorn for the Planning Commission, Alderwoman Mitchell moved to approve the appointment and was seconded by Alderman Aiken. The motion passed unanimously.

On the question of Jeff Hentschel for the Main Street Central City Commission, Alderman Aiken moved to approve the appointment and was seconded by Alderwoman Mitchell. The motion passed unanimously.

Mayor pro tem Laratta commented, “I think Jeff is going to be super for this.”

Alderman Hidahl commented, “I had constituents contact me after the last snow we had; I have no idea how well the Parkway was done because I don’t drive the Parkway.” Alderman Aiken responded that he drives the Parkway and, “The Parkway was done very well.” He then commented that by St. James Methodist Church, the snow falls off the roof long after the storm is done and creates some ice. Aiken then asked Director Hoover for comment and Hoover addressed Alderman Hidahl saying, “Jack, were you able to finish your thought? It looked like you were not done.” Alderman Hidahl replied he had not finished and continued that “I think it was a challenging storm because it was so consistent; I don’t think it gave you a break, but the comment to me was that they had not seen a plow in 48 hours on 3rd High Street.” Hidahl stated he did not think it was too bad and asked Director Hoover if he had any openings for drivers? Director Hoover replied that they are fully staffed. One of their bigger concerns is manpower for the sidewalks and stairways which they have to pull staff off other areas to do those sections. Regarding the High streets, “We may have applied material and it melted, but it snowed over it again before we could get up there” said Hoover. “When I came over the Parkway Monday morning, by and large there was about 75% clear pavement and I think that was a very, very high level of service.” Alderwoman Mitchell added, “I also drove around, and our Parkway was better than I-70 and (highway) 119.”

Alderman Hidahl then commented on the water issue last January in which the system was turned off due to a break in the line. The investigation concluded the break was caused by corroded bolts that dropped off a valve. “I am very concerned that the corrosion is that fast,” commented Hidahl. The valves are not that old and he remembers when they were installed about 30 years ago. The steel used should hold up 50 years or more assuming the hardware is reliable. Manager Miera responded that they are working on an inventory and mapping of system and are looking to replace four to five  PRVs each year along with the valves themselves.

Alderman Hidahl next comment that, “I understand the faux plank sidewalks we’ve been installing are a result of design guidelines from a while ago. I think those design guidelines need to be changed.” He said that when they are wet, they are slick, and they look terrible. Alderwoman Mitchell added, “I’m interested in anything that keeps people upright on the sidewalk.” Director Hoover stated, “My recommendation would be to go to a standard gray, curved gutter sidewalk. We could blade the sidewalk down quicker and could probably get more for our money.” Alderman Aiken commented, “The sidewalk in front of St James – that was put down in ‘83 I think, and that held up real good.”

Mayor pro tem Laratta commented, “To Chief Gary Allen and the EMTs in this City – they are superb!”

Mayor Pro tem Laratta opened the floor to the public for anyone who wished to speak to the council on any items not on the agenda. No one chose to address the Council.

Mayor Pro tem Laratta adjourned the regular meeting at 7:56 p.m. The next regular Council Meeting will be Tuesday, March 19, 2019.

END_OF_DOCUMENT_TOKEN_TO_BE_REPLACED

Where the dead get to tell their story By Jaclyn Schrock On Saturday, August 21, the Gilpin Historical Society held their annual Cemetery Crawl. Tickets allowed the shuttle of hundreds of guests from the Teller House parking lot to the Cemetery. Depending on v... END_OF_DOCUMENT_TOKEN_TO_BE_REPLACED